When you have married writers, dinner conversations have to be a bit abnormal.  Many start with, “I just can’t figure out the best way to kill him.”  I've often wondered about the other people sitting around us in restaurants, because we always work when we eat out.

Then there's "Once I got started, I really didn't want to kill him," leading to the inevitable response, "Yeah, but he's got to die, doesn't he?"

Obscure poison, bludgeoning, a knife to the heart . . . so many options, and we really have to decide. Who's the victim? Who's the killer? Who are the red herrings? So many things to figure out while we're sitting there in the buffet.

And the people at the next table are listening to me say, "I really think I need to kill more than one person this time."

That's just when we're working on a mystery novel. When we're plotting a Western, we might talk about a bank robbery or an ambush. You know that if one of us says, "Then he gets shot in the back," somebody around us is just going to hear, " . . . shot in the back."

But all those are minor concerns, I guess. What I'm really worried about is that Western romance I've got coming up on my schedule, and the inevitable moment I'll be sitting there at the restaurant table asking in all seriousness, "Just how dirty do you think the sex should be?" 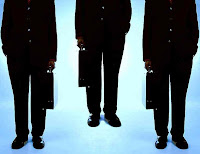 Or maybe James will be working on a thriller, and we'll be talking about terrorists and assassinations and rogue states and nuclear bombs. If the government really is listening in on everything, I'm sure that someday guys wearing sunglasses and driving black SUVs will come knocking on our door and we'll be hauled off saying, "But . . . but . . . but I'm just a writer!"
Posted by Livia J Washburn at 1:00 AM