I have no problem picking my favorite Western TV series- it's the grand-daddy of them all, Gunsmoke. I would have trouble picking my #2- I'm also a huge fan of Have Gun: Will Travel and Maverick, as well as more recent shows like Deadwood. But my first love is Dodge City. And why not? It's the most iconic of the "adult" westerns to hit the tube in the 1950s, running for twenty seasons.

I don't need to describe the show for you. You know about Marshal Dillon, Miss Kitty, Doc Adams, and the rest. Instead, at the end of this article, I will post links to several essays I have written about different aspects of the show at my own blog.

For today I will focus on my favorite episode. Now that's a tough one, there are probably dozens of contenders. But the one I always go back to is an episode from the Eighteenth season, "A Quiet Day in Dodge." (note: okay, the two-part "Island in the Desert" would be #2.)

The episode first aired on January 29, 1973, so I probably saw it in its first run. It's one of the humorous episodes, thrown in now and then to break the tension, and while it's quite funny that's not the main reason I like it so much. I like what it tells us about Matt Dillon and Miss Kitty, and their relationship.

The story opens with Matt riding into town just after dawn, a prisoner in tow. He locks the guy up, and then retires to his own cot- he has been up for 36 hours, and all he wants out of life right now is a peaceful sleep. 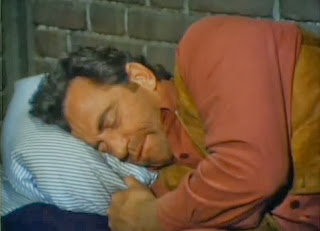 But he's not going to get it.

As the day progresses, an increasingly rumpled and grumpy Marshal Dillon has to deal with a host of problems, all designed to keep the sandman away. 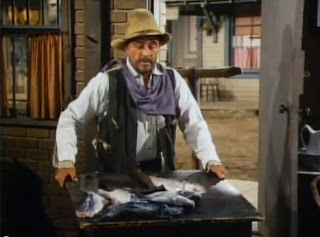 Festus, who is apparently one of those annoying, chipper morning people, makes an ungodly racket cleaning fish in the office.

Matt's prisoner stabs him in the hand with a fork. 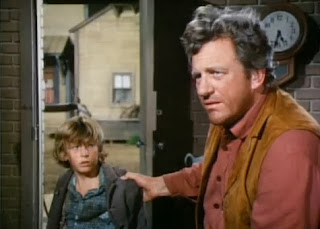 A crotchety old lady harangues the marshal over what she deems his lapses in duty (played by Margaret Hamilton, the Wicked Witch of the West herself.) 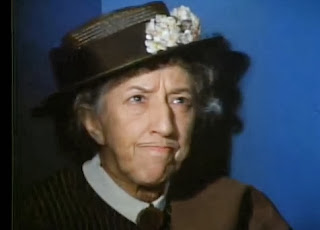 A brawl breaks out in the Long Branch, started by two grizzled old miners.

But the worst of it all... Miss Kitty is royally ticked off at Matt. It seems they had a picnic scheduled for the day before, which had been put off several times, and -yet again -Matt missed it because of work.

Finally, by the end of the day, Matt has managed to solve all the problems (including that of the kid, whom he gives a good spanking.) He even patches things up with Kitty; she makes him a special dinner, which they share in her room. It is pretty obvious what Miss Kitty has in mind for dessert.

This is one of the very rare glimpses we get into what goes on behind closed doors between the two longtime paramours. Remember that Toby Keith song, when he said Matt never did hang his hat at Kitty's place? Well, he does... and with a very domestic sort of familiarity. 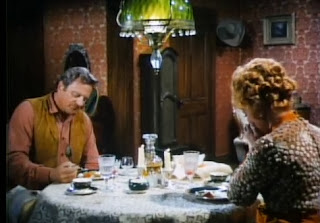 But then, Kitty turns her back for a moment.... and the exhausted marshal is stretched out on her bed, snoring like a banshee. Not quite what she had in mind. The quietly fuming Miss Kitty breaks a porcelain pot to see if it'll waken her beau, but he doesn't stir. She marches downstairs to the bar -pouring beer over the heads of the two miners -then heads out the front door. The ever-protective bartender Sam calls after her, "It's awfully late, you might be molested!" 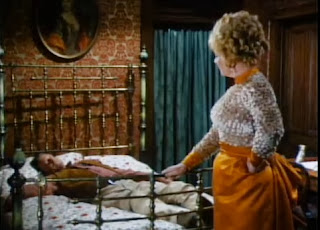 She laughs sarcastically and says "Really!" The implication, of course, was that she had been trying all day. 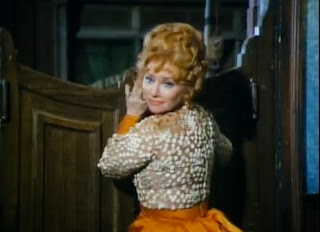 For the better part of two decades, the real relationship between Matt and Kitty was sort of between the lines. In this episode, we finally get an idea what they had been up to upstairs all those years. Although... not on that particular day.

Click on this link to see a blooper from the episode, in which the Wicked Witch cracks up the whole cast with a very unexpected ad-lib: http://www.youtube.com/watch?v=2ngveiYIaeQ

And here are my previous blogs about the show:

Gunsmoke, Dodge City, and Me

Marshal of What, Exactly?