Back in the day, a man usually tried to avoid a fight. Remember that easy access to firearms we discussed in a previous column. However, humans being human, arguments occurred. Here are some of the terms you’d have heard in such a situation. This is part 2 of "Them's Fighting Words!" For more fighting words (A-L) look in the archives, July 31, 2013. 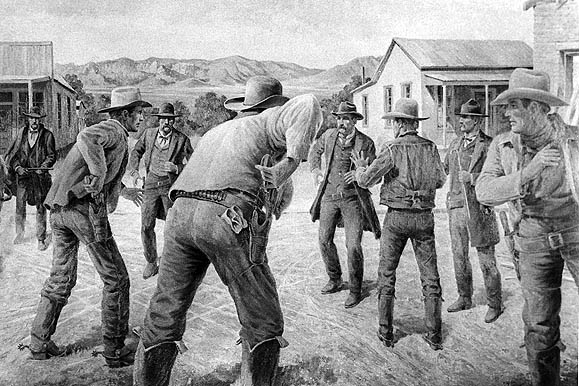 Milling: fighting, as in milling about aimlessly in a crowd, punching whoever is closest

On the prod, on the shoot: spoiling for a fight

Peck of trouble: a peck is a unit of measure, a quarter-bushel

Pucker: in a state of irritation or anger; the image is of a puckered brow or frown

Pull in your horns: quit looking for trouble; an irritated cow thrashes about with its horns

Raise his bristles: to incite his anger; an angry animal raises its hairs and puffs itself up to appear larger

Raise sand, raising Cain: to cause trouble; Cain is the Biblical brother of Abel, the first murderer

Rantankerous: a humorous variation of cantankerous; contentious or stubborn

Rip out: impatiently give vent to one's feelings or opinions, as in letting emotions rip from one’s body

Roily or rily: vexed; roil means to stir up sediment and make turbid

Row up: to rebuke, punish with words; a row is a disturbance 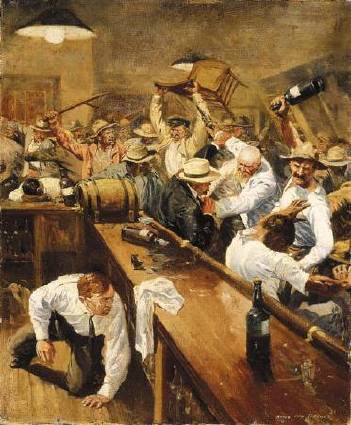 Scoff off, scuff away: to drive away or impel, as in by scoff or scorn

Score off: to get the better of one, especially in a verbal debate; the image is of scoring points in a game

Scrap: to fight or box; possibly a variation of “scrape” meaning an abrasive encounter

Scratch, to come to the scratch: to begin a fight; could either be from the literal definition of scratch, or from the fact that roosters scratch the dirt before attacking, to sharpen their claws

Set-to: argument, debate, contest in words; originally boxing slang from the definition of “set” as in beginning a task or arrangement

Settle his hash: to properly punish him; hash is a dish of minced meat

Sharp stick, after him with a sharp stick: determined to have satisfaction or revenge