Writing about Indians When You're Not One, Part 4: Leadership

This series started out to be a single blog entry back in the summer, but I quickly realized I was going to need more words... so I announced it had morphed into one of three parts. And there's still more to say, so I've given up and quantifying and decided this is a series.

If you've read the earlier entries, you know there are a lot of cultural pitfalls to writing about various American Indian cultures -specifically, there are many things that Anglo-Americans just understand differently than do the peoples who are native to the Americas. Many of those things differ from tribe to tribe and from region to region; at the same time, there are some things that apply generally to those indigenous people, just as there are certain cultural things that make some people European even though they are from different countries.

This time around, I'm going to talk about American Indians and leaderhip.

Of course, there were some similarities between those very first explorers and colonists and the Indians they encountered. The Aztecs of Mexico and the Incas of Peru had empires, and their governments were composed of strict hierarchies, headed by leaders that were roughly equivalent to the kings the Europeans were used to. 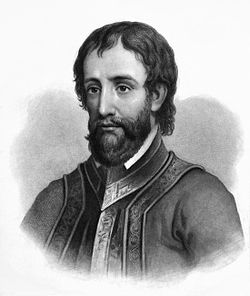 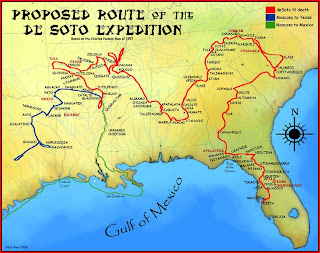 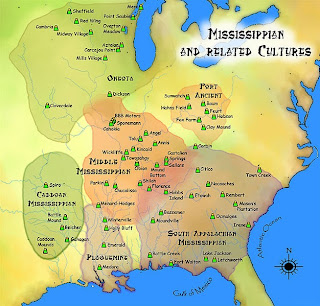 In fact, when Spanish explorer Hernando de Soto led his expedition through the Southeast in the early 1540s, he found societies in North America that were (though smaller in scale)  similar to those in Central and South America. They were called the Mississippians -a catch-all term that included several different peoples -and their societies had been in place in the South and the Midwest for centuries. They had several things in common:

1. They built "platform mounds", miniature earthen versions of the Meso-American pyramids, which played an important role in their spiritual life.

3. Extensive trade networks, stretching from the Gulf of Mexico to the Great Lakes, and from the Atlantic coast to the Rocky Mountains

4. A strict social hierarchy, with a powerful chief at the top and a system of social classes, with religious and political power in the hands of a few. As with the Aztecs and Incas, there were large population centers that politically dominated smaller villages, who owed them fealty.


After De Soto passed through, it was the better part of a century before Europeans significantly penetrated the interior of the Southeast again. And when they did, they found a completely different world than De Soto had encountered.

You see, marching along with De Soto's men was another kind of army- disease. Due to various factors, Europeans had built up a hardy immunity to all sorts of things -a few centuries of plague, and of interacting with the people of Asia and Africa, made that possible. The Indians did not have that natural advantage. Death on an unimaginable scale -probably much worse than the Great Plague of Europe -devastated native peoples who had encountered the Europeans, or sometimes just other Indians who had met Europeans. The clearly defined, hierarchical societies encountered by De Soto collapsed into anarchy. In many cases, only a tiny remnant of a tribe remained -these remnants joined with other tribal remnants to form whole new groups, called coalescent societies (this is why some groups, like the Muscogees/Creeks, had several apparently unrelated dialects within their nations.) This new way of living in the South and the Midwest resulted in tribes whose lifestyles were much simpler, and much less clearly defined by class, than De Soto's Mississippians a century or more earlier. It was these, not their hierarchical forebears, that the English and French would meet.

Those later Indians had a more communal lifestyle. Power, prestige, and leadership were all handled much differently.

For one thing -and this was very confusing to the colonists -tribes often did not have a single leader. Even more confusing: a leader did not have absolute power over the rest of the tribe. Rather, he was more of an adviser. He could make suggestions, but everyone was free to decide for themselves whether to listen to him or not. Europeans did not operate this way; therefore, whichever leader they first encountered (or was most amenable to them), they summarily designated as the King or Chief of that tribe. They would then negotiate with him, and expect him to speak for his whole nation, not understanding (and sometimes not wanting to understand) that he could actually only speak for his small band or for himself. Indians, meanwhile, had a very hard time understanding colonial soldiers -what kind of idiot marches into certain death because someone orders them to?

Europeans had power and leadership because, ultimately, of the property they owned, or their money. Officers bought a commission, they did not earn it. Kings and nobles held their station because of actions their ancestors performed a millennium before.

Indians in North America did not usually operate that way. Leadership was not hereditary in most tribes (and since three-quarters of tribes were matrilineal, "hereditary" would have had a different meaning anyhow.) This does not mean there were not often leaders from within the same family: in New England, Wampanoag leader Massasoit was succeeded by his son Metacom; in Virginia, Powhatan was succeeded by his brother Ophecancanough; in 18th century Cherokee lands, Dragging Canoe was as influential as his father Attakullakulla (Little Carpenter) had been. But it does mean that such transitions were not mandated or guaranteed; new leaders could just as well have been someone else.

To become a leader, you had to... convince people to follow you. They would choose to do this if you had a track record of making good decisions, if you were a very good orator, or if you were deeply spiritual. To remain a leader, you had to keep those qualities up and running. Even if you were a leader, military planning could be a challenge; almost always, some of your men were going to ignore you and go about the fight however they wanted. This is a paradox: Indians could be extremely communal and extremely individualistic at the same time.

Besides these things, an Indian gained prestige -not by how much he accumulated, like Europeans -but by how much he gave away. This ties in to my next installment, Indians and property.

If, as an Indian leader, you could not really give orders, what could you do? A couple of 18th century visitors among the Cherokee give us some idea.

“When war is the result of their councils, and the great leader takes the field, any one may refuse to follow him, or may desert him, without incurring any punishment, but by such ignominious conduct he loses his reputation, and forfeits the hopes of distinction and preferment.”

“…They commend a warrior for having behaved valiantly against the enemy; when he acted cowardly, they introduce the minutest circumstances of the affair, with severe sarcasms which wound deeply. I have known them to strike their delinquents with those sweetened darts, so good naturedly and skillfully, that they would sooner die by torture, than renew their shame by repeating the actions.”


While these examples are from the Southeast, there were a lot of similarities with Plains tribes. In both areas, European travelers who -for one reason or another were present during tribal councils -often made the same observations. Indians talked and talked and talked before they did anything. This is because no one individual had the authority to coerce others to do what he wanted; he had to persuade them. 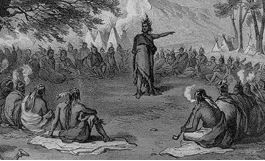 If someone had a reputation as a good leader, and you chose not to accompany him or take his advice, you would be embarrassed when he won glory and you couldn't share in it. And if your refusal to do as he says results in your side losing the fight.... your friends are going to make fun of you mercilessly.

It was all much, much more complicated than a Big Chief barking out orders.

I am going to close by giving you this LINK to a report in the American State Papers... on pages 289-291 a trader named Richard Finnelson, actually an American spy, witnessed and reported on a Cherokee council (with Shawnee and Creek representatives) in 1792 in which it was decided to attack Nashville. The print is small, but if you read it you'll see many of the things I've described.