Lace Your Tree Up

What would the Old West be without a discussion of the typical mode of travel: horseback riding? Anybody who could afford one owned at least one horse, and many working folks kept several. A cowboy had a whole string of mounts that he used for different jobs. So lace your tree up (tie on your saddle) and get aboard – today we’re going riding. 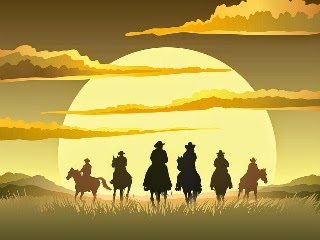 Beefsteak: to ride a horse in a way that galls its back

Bog his head: when a horse ducks his head low before bucking

Break, bust, gentle: to train a horse to be ridden. The best horses are trained gently, but often a cowboy would simply toss a saddle onto the animal and ride it until it got the general idea.

Breaking age: the age when a horse can begin to learn to work under a saddle; typically three to four years old.

Boil over, Break in two: when the horse erupts underneath the rider

Buck: a horse’s pitch, its attempts to throw a rider

Chug: to spur a horse forward

Cinch-binder: a bucking horse that reared and fell backwards

Cloud-hunter: a horse that likes to rear

Comb: to rake a horse’s sides with spurs in order to make it buck

Crow-hop: to make bucking jumps with straight legs and a bowed back

Curry the kinks out, curry him out: to rake a horse with spurs until it stops bucking

Daylighting: letting daylight show between your bottom and the saddle; poor form

Double-shuffle: an abrupt change in the rhythm of a bucking horse

Fence-worming: bucking that gives a zig-zag motion like a snake-fence

Forging: the striking of a horse’s front shoes by its hind ones

Fox-trot: a pace that is said to be extremely comfortable, but it is not generally agreed exactly what that pace is; commonly, the front legs walk while the hind legs trot, a lively but gentle gait

Gaits: Horses have four “natural” gaits. In order of speed, these are the walk, trot, canter, and gallop. They can also be trained with additional gaits, called “ambling” gaits, such as the fox-trot, the rack, or the running walk. 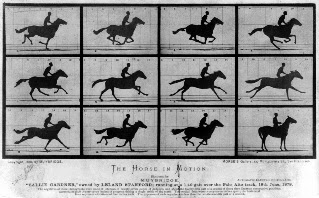 Gimlet: to ride a horse until its back became sore (gimleted)

Goat: to perform a half-hearted bucking with stiff legs and an arched back

High poler, high roller: a horse that leaps high into the air when bucking

Honest pitcher: a horse that starts bucking as soon as mounted instead of waiting for a bad time

Hug rawhide: to keep your seat in the saddle during rough times

Hung up: fallen from the saddle, but with one foot caught in a stirrup-iron

Hurricane deck: the back of a bucking horse 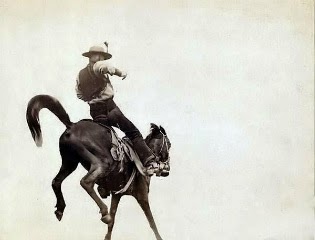