Western Fictioneers Presents West of the Big River: The Doctor by Clay More 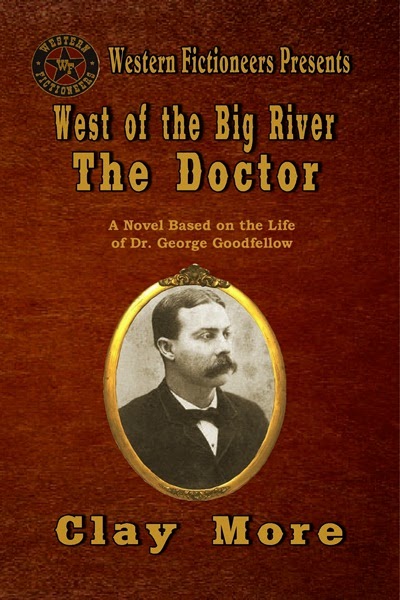 In Tombstone, Arizona Territory, the town too tough to die, Dr. George Goodfellow is known as the Surgeon to the Gunfighters. Friends with the Earp brothers and Doc Holliday, his services as a doctor are needed in the aftermath of the Gunfight at the O.K. Corral, but Goodfellow is handy with a gun and his fists, too, and he needs those skills to survive when he's stalked by a crazed miner and has to untangle a deadly murder mystery!

The West of the Big River series continues with THE DOCTOR, an all-new, exciting novel based on actual historical characters and incidents by acclaimed Western author Clay More, author of STAMPEDE AT RATTLESNAKE PASS and many other novels from the Western Fictioneers Library. One of the most stirring time periods in Old West history comes to vivid life in this tale of vengeance and heroism and a frontier sawbones dedicated to healing.

Clay More is the western pen-name of Keith Souter, a part time doctor, medical journalist and novelist. He lives and works within arrowshot of the ruins of a medieval castle in England. In 2014 he was elected as Vice President of Western Fictioneers and he is also a member of Western Writers of America, The Crime Writers’ Association, International Thriller Writers and several other writers organizations.

He writes novels in four genres – crime as Keith Moray, Westerns as Clay More, Historical crime and YA as Keith Souter. His medical background finds its way into a lot of his writing, as can be seen in this novel about Doctor George Goodfellow as well as in most of his western novels and short stories. His character in Wolf Creek is Doctor Logan Munro, the town doctor, who is gradually revealing more about himself with each book he appears in. Another of his characters is Doctor Marcus Quigley, dentist, gambler and bounty hunter. He has recently published a collection of short stories about him in Adventures from the Casebook of D Marcus Quigley, published by High Noon Press.

If you care to find out more about him visit his website: http://www.keithsouter.co.uk
Or his blog http://moreontherange.blogspot.co.uk
Or check out his regular contribution about 19th Century Medicine here on the WF blog.