LASSOING A BRIDE? or LASSOING A GROOM? GET BOTH! by Cheryl Pierson 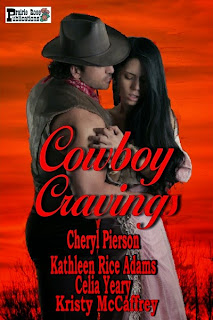 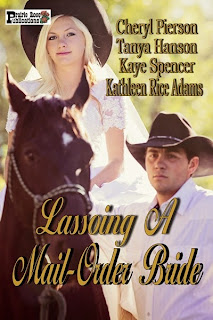 Prairie Rose Publications is going strong with several new anthologies for the summer! Cowboy Cravings and Lassoing a Mail-Order Bride will be released early in June, but read on, cause we've just released LASSOING A BRIDE and LASSOING A GROOM yesterday, and what a great group of stories these are! Take a look! 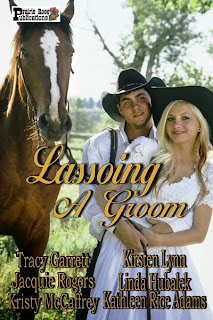 How is a woman supposed to catch a husband? In the wild, wild west, she’s got to find a way to Lasso a Groom! Some of them are lawmen…some are outlaws. Ranchers and homesteaders are fair game, as well—none of ’em safe from love’s lariat, or the women who finally manage to rope ’em in!

DON’T GO SNARING MY HEART by Jacquie Rogers
Can rancher Dex Madsen get past loner Betsy Lynch's goats and killer chicken to help save her mining claim and win her heart?

RACE TO MARRY by Kirsten Lynn
He’s in town to tame a man-killer. She’s accused of being one. When she proposes marriage the race is on.

CANYON CROSSING by Kristy McCaffrey
In search of her brother, Annabel Cross enters Grand Canyon. When U.S. Deputy Marshal Angus Docherty rescues her from a cliff side, her most guarded secret might save them.

THE PERFECT HOMESTEAD BRIDE by Linda Hubalek
Will a dangerous man from Gussie Hamner’s past sabotage the future she’s building with Noah Wilerson?

THE WORST OUTLAW IN THE WEST by Kathleen Rice Adams
An inept bank robber and a bossy spinster team up to rob an empty vault. What could go wrong? 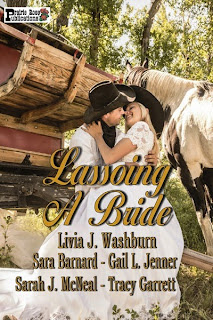 Some brides are hard to get a rope on, for sure! But in these wild west romance tales, being married is like sugar and lots of spice—with a dash of pepper in the mix! Ain’t nothin’ tame about these brides, who have a delicious story of their own—each falling under the spell of a handsome devil she thought was out of her reach. Unanswered prayers, broken dreams and unexpected circumstances are sometimes the best way for a groom to get the gal he loves when he’s looking at Lassoing a Bride!

PRETTIEST LITTLE HORSE THIEF by Gail L. Jenner
Sometimes it’s the stolen and unexpected love that has the power to heal a broken heart

THE BANK ROBBER'S LAMENT by Sara Barnard
Smith found equal amounts of both anonymity and trouble in Gabriel's Settlement. But when he sets eyes on a beautiful woman and her young daughter who are being abused, might some other emotion be fated to bloom in that desert town of far west Texas?

THE BRIDE AND THE BADGE by Livia J. Washburn
Was Emily just bait for an outlaw trap—or did she mean more than that to the handsome Texas Ranger?

Covers were ALL designed by our very own Livia Reasoner! Aren't they gorgeous?

Available at B&N, Amazon and other fine booksellers in digital and print!