Scalped is a comic book series from DC that ran from 2007 to 2012. It was originally envisioned as a modern-day updating of DC's 1970s American Indian character Scalphunter (which we discussed HERE), but wound up being something completely different: a hardboiled, noir crime series set on and around an Indian reservation, that many critics compared thematically to the hit TV show Breaking Bad (interestingly enough, the comic series also had a 60-part story arc.)

It was written by Jason Aaron with art by R. M. Guéra. Aaron has said the over-arching plot was inspired by the story of Leonard Peltier and the 1970s conflicts between AIM (American Indian Movement) and the FBI- and if you follow it, you will clearly see the connections.

The series stars Dashiell Bad Horse, who is returning to the (fictional) Oglala Lakota reservation called Prairie Rose after many years away. Bad Horse, a "borderline sociopath with deep-seated anger issues," is promptly hired by corrupt tribal president Lincoln Red Crow to serve on the tribal police force, which is really an arm of Red Crow's many illegal activities. Bad Horse's mother and Red Crow had both been heavily involved in radical Indian activism on the rez in the 1970s. What Red Crow does not know is that Dashiell Bad Horse is actually an undercover FBI agent, there to not only get info on Red Crow's criminal empire but solve the decades-old murder of an FBI agent.

The series has garnered a lot of praise from critics. It really is a very well-written, gritty crime series- if it sounds like it should be on TV, just last month it was announced that WGN will be producing it as such in the near future.

On the other hand, I've heard a lot of criticism about the series, from Lakota friends in particular, due to the fact that it focuses so heavily on poverty, crime, and corruption, thus reinforcing a lot of general stereotypes. Such complaints, in my opinion, should be honored and acknowledged. It'll be interesting to see how WGN handles these issues in their television series. 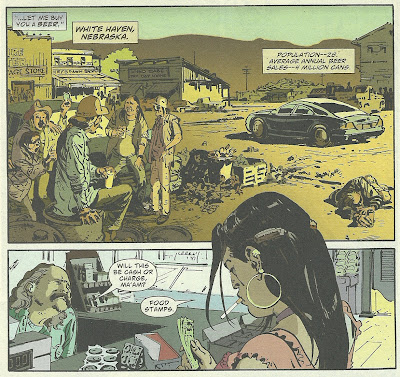 The entire comic series has been collected into ten graphic novels, all available from online booksellers: