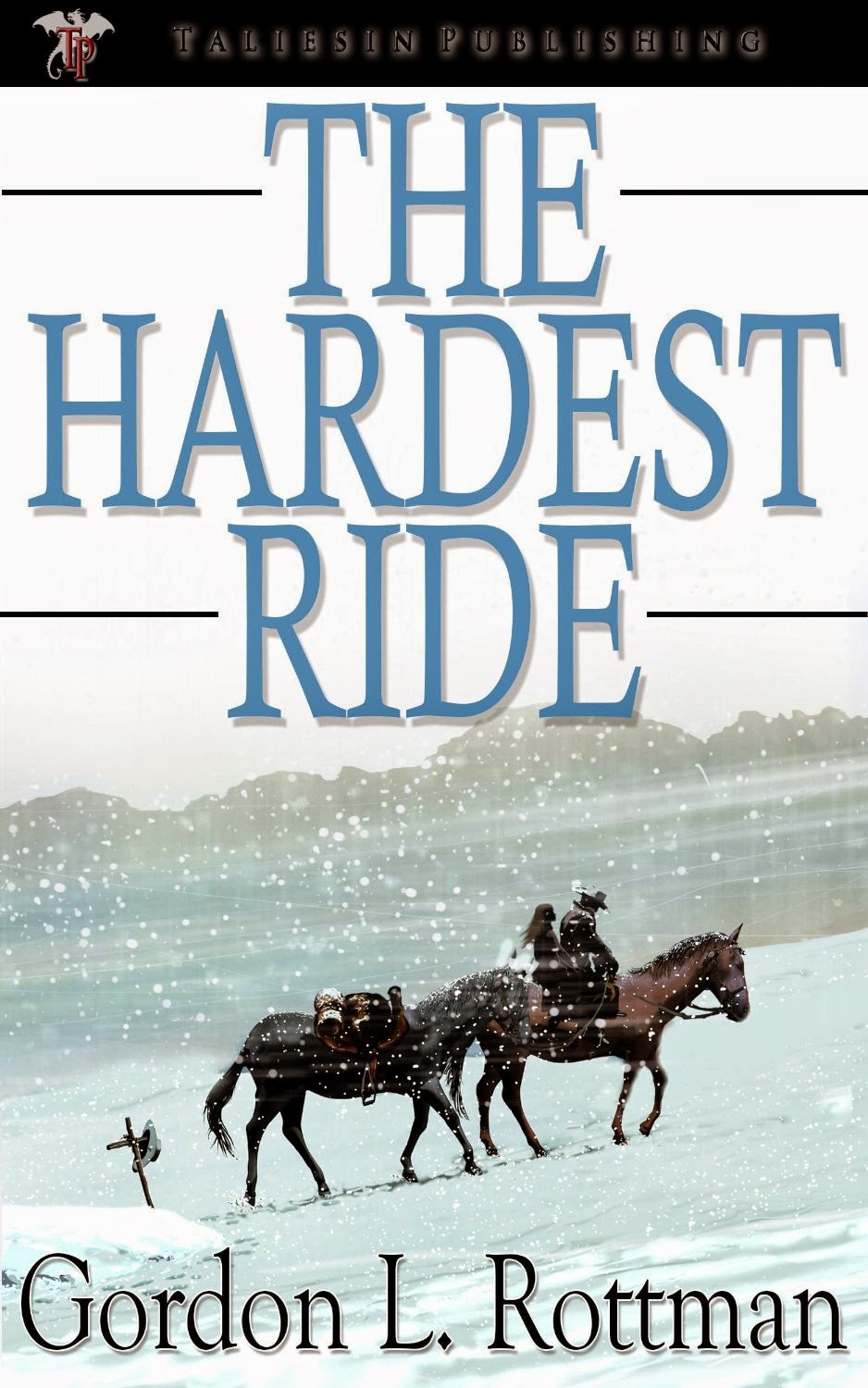 A young, out-of-work cowpoke stumbles across the sole survivor of a brutal massacre. Alone and mute on a frontier where Mexican women are abused and discarded, teenaged Marta is ill-prepared to care for herself…or so Bud Eugen assumes. When he can find no one, not even a church, to take her in, Bud does the chivalrous thing and appoints himself Marta’s protector. The initially reluctant relationship changes them both, and soon they’re protecting each other.

Gordon Rottman’s debut western, The Hardest Ride, is a nominee in two 2014 Peacemaker Awards categories, Best First Western Novel and Best Western Novel, and rightly so. Though a maiden release, the story holds its own against some of the best western fiction penned by contemporary authors. Though the plot stumbles under its own weight in a few spots, the characters and settings are so vivid, the author’s voice so strong, that readers will gladly overlook minor missteps.

Bud and Marta compose an odd couple from the beginning. She’s prickly; he’s easygoing. She’s mute; he verges on chatterbox. He’s tough enough to survive on his own in the West; in some ways, she’s tougher. Inside they’re remarkably similar: Two lonely young people wearing masks to cover life’s scars. As they gradually come to rely on one another—both steadfastly denying anything of the sort—readers witness a heartwarming union of two kindred spirits.

One of the notable strengths of a very strong story is Rottman’s characterization of women. Marta and the minor female characters are fully formed individuals, not merely set dressing for male-centered action and adventure. Marta is one of the most intriguing female leads to arise in fiction of all stripes in decades. She’s prickly, but not shrewish; capable, but not emasculating; mute, but thoroughly able to express herself. If for no other reason, The Hardest Ride deserves kudos for the way in which Rottman portrays female strength in the Old West.

Rottman describes the story as both a young adult western and “a western romance with a body count of about eighty.” In truth, The Hardest Ride is anything but easy to pigeonhole. It’s definitely a historical western, but one with broad appeal across age groups and sub-genres. Young or mature, whether western readers prefer sweeping sagas, classic horse operas, shoot-em-ups, or love stories, The Hardest Ride will fill the bill. Approach the book with no preconceived expectations and decide for yourself.


Kathleen Rice Adams is a Texan, a voracious reader, a professional journalist, and an author. She received a review copy of The Hardest Ride from the author. Her opinions are her own and are neither endorsed nor necessarily supported by Western Fictioneers or individual members of the organization. Links in the review are for convenience only; they do not produce affiliate revenue.