The Dead Line, as it came to be called, was a railroad, the Missouri, Kansas, and Texas, cutting across the middle of Indian Territory.

It ran straight south from Caldwell, Kansas to Fort Reno, I.T., then on down through the Cheyenne and Comanche and Kiowa lands, crossing the Red River into Bowie, Texas. It was not only a line on a map, but a physical demarcation. West of it there was no law, only outlaws. On trails out there, notes would be put up on trees and posts, sort of reverse wanted posters, letting lawmen - usually those Federal marshals up from Texas or over from Arkansas - know they’d be killed if they continued their pursuits west of the Dead Line.


Throughout the 225 year history of the U.S. Marshals Service, over 200 deputies have been killed in the line of duty. Of those, more than 120 lost their lives in the Indian and Oklahoma Territories between 1850 and Oklahoma statehood in 1907.

In the storied annals of the American West, no place comes close to matching the dangers and mortality these Federal officers faced doing their jobs. Their courage, resolve, and dedication to duty were beyond reproach...for the most part. Those who survived became titans in the legends of the West.


The stories in this collection I call West of the Dead Line are fiction, but the encounters these lawmen faced, and The Dead Line, were not.

This first volume - seven are written, about five more are sketched out - involves tales centering around Bass Reeves, an illiterate ex-slave, adopted Creek Indian, scout for the Federal marshals, and eventually a Deputy U.S. Marshal himself, perhaps the best there ever was. In his 32 years as a Federal peace officer in the Indian Territory and young state of Oklahoma Reeves brought in over 3,000 outlaws to the Federal Court in Fort Smith, Arkansas, both dead and alive, one of whom was his own son wanted for murder.

So here are story lines and excepts from the first two stories in Volume I:

After the cold-blooded murder of two lawmen, Deputy Marshal Bass Reeves, along with his colleagues, Deputy Heck Thomas and Posseman Jud Coldstone, pursue a ruthless Seminole “freedman” into the harsh country of the Wichita Mountains. Aided by a band of Cheyenne hunters, Reeves and his allies seek to bring the outlaw Pike Cudgo to justice.

Deputy Marshal Bynum P. Nelson felt surprise right before he died. He had a fraction of a second to be pissed, but he was mostly surprised. It never occurred to him that Pike Cudgo would walk right up to him, and stick that eight inch blade into the left side of his neck. He knew the Seminole freedman was a mean and dangerous sumbitch, but he’d been caught off-guard by Cudgo’s cordiality. It was his last mistake.

“You Deputy Nelson?” the man asked. He came walking up to him out of the night shadows right there on the main street of Waurika, smiling like they were at a church social, and he was about to introduce himself. “Your man, Maha, said you’s lookin’ for me.”

He started to stick his hand out as if to offer a handshake, but instead slid a bone-handled Boulder knife out of his coat sleeve and stabbed it into Nelson’s neck, right between two vertebrae, severing the lawman’s spinal cord. The surprise came up in Nelson’s brain the second he caught a glint of the raised blade, but that split-second was all he had as the emotion died right along with the rest of him that fatal instant there on the night streets of Waurika, I.T. in 1889.

Cudgo embraced the slumping body of Nelson while he jerked the knife out of the lawman’s neck, then let the dead weight of him drop to the dirt street. Cudgo wiped the blade on a faded red bandana that hung from his belt, standing there looking around. His cruel black eyes searched for anyone watching; anyone he thought might care about what he’d just done, anyone else he might have to take care of. The expression on his mean black face was a mask of cold-blooded dispassion. Human life had no value to Pike Cudgo, except his own.


#2 - Freed Men
The young slave Bass Reeves is captured by a Yankee spy during the Civil War campaign in Arkansas which ended at the Battle of Pea Ridge. Set free by his captor, Bass wanders into the encampment of the 2nd Cherokee Mounted Rifles of the Southern Army whose leader presses the lost slave to stand and fight with them. Battling shoulder-to-shoulder with the Cherokee warriors during the fierce combat, Bass’s life is forever changed in a way he never before imagined.

“Where you from, Yank?” Bass asked.

His captor stared at Reeves squarely before looking into the fire. “Kansas, mostly,” he said. “Rode with General Lane’s Jayhawkers. He didn’t much cotton to secessionists… or slave owners. Called himself an ‘abolitionist.’”

“That why you rode with him? You uh…ab-bol-lishnest?”

The Yankee threw back his head and laughed. He stood and walked out to the edge of the firelight to take his own piss, chuckling to himself as he did so.

When he came back to the fire, he sat again opposite Reeves, stirred the coals with a stick, threw on another piece of wood. “You even know what that means, boy? Abolitionist?"

“Sho’ I does,” Bass answered, a little indignant. “It mean freein’ slaves.”

“Seems to me the only freed men is the dead ones,” his captor said. He paused to stir the fire some more, looked at Bass. “I’ve personally freed a few myself,” he said with a grin and a wink.

“Naw, I rode with Lane because he offered me the job,” he continued. “Pay wasn’t much, but it kept me out of jail. I needed that more than money at the time.

“Still, sayin’ it’s legal to own a man don’t seem right to me. Sure as hell don’t believe I’d put up with anyone claimin’ they owned me.”

Silence fell between the pair again. The haunting sound of a harmonica drifted in with the cold night air. Men’s voices echoed through the black forest; voices in calm conversation and some laughter, distant but clear like coming across a still river at night.

”Whas yo name, then?” Bass asked. Another long pause followed before the Yankee answered.

“I got several names. Go by Haycock in this here army, William Haycock. Back in Kansas some folks called me ‘Wild Bill.’ Called me that because of the shape of my nose, made fun of how it swoops out sorta like a duck’s bill. I didn’t much like it at first, made a few callin’ me that pay. But now I believe I like it…yes sir, believe I do. You can call me Wild Bill.”

Bass nodded, and grinned back at the man. “Wild Bill,” he repeated.

“You realize I’m only telling you this ’cause you’ll be dead before sundown tomorrow.”

Bass looked cold-eyed at Haycock. “You gone kill me, Wild Bill?” he asked.

Haycock laughed again. “Naw, I ain’t gonna kill you, Bass. I’m gonna let you go. But boys see a nigger runnin’ free through these here woods, I figure one side or t’other’s bound to shoot your ass. Ain’t that what we’re fightin’ for? To set your likes free?” He cocked an eyebrow and grinned at his captive.

Bass stared back at Haycock. After a bit, he said to him, “You lets me go, Wild Bill, how you know I ain’t finds myself a gun an’ frees yo’ ass?”

The Yankee continued to grin back at Bass. After a few seconds Haycock began to sputter through his teeth, then his chest bucked. His eyes squinted as snorts of laughter welled up from his gut and burst out his mouth. 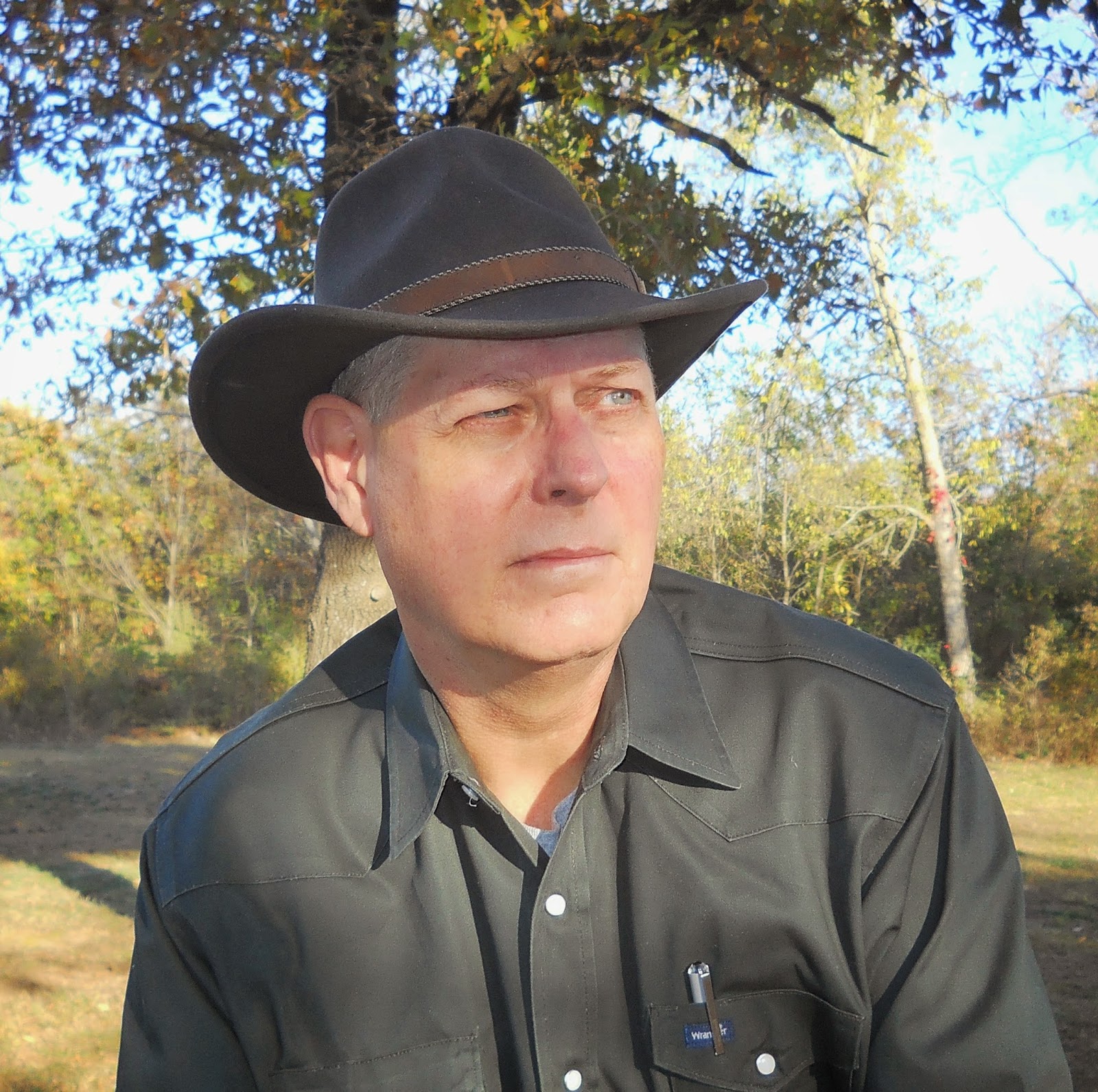 You can get your copy of the West of the Dead Line stories  by clicking on the titles above. Phil has also authored three other novels: the award-winning historical western novel,  Red Lands Outlaw, the Ballad of Henry Starr;  a sports inspirational about small town schoolboy football entitled GAME, an American Novel; and Treasure Kills (formerly Legends of Tsalagee), a mystery/adventure in a small town.