I can hear it now... "but Star Wars is sci-fi." "It's set in fictional worlds of outer space." "Star Wars, a western? BUNKO!" Aha. You may not agree, but I'll try to convince you that this classic American film is indeed a disguised "western" in "a galaxy far, far away." 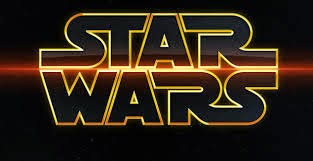 First, I'll confess that my first date with my husband was going to the movies in 1977 to see Star Wars. We'd heard how good it was, yadda yadda. Hey, we like good movies. So why not? Like any newly dating couples, we were cautious (no popcorn, might stick in the teeth... do we hold hands this soon? nah... what else should I say to a guy I don't know well?) Once the film began, with the "backstory" scrolling into the distance, and the small space ship being swallowed up by the huge Imperial cruiser -- we totally forgot each other. The movie was *that* good.

Everyone knows that George Lucas is a western fan. Sure, he loved Flash Gordon and wanted to incorporate those elements, but here's what he also said:

"I liked westerns. Westerns were very big when I was growing up. When we finally got a television there was a whole run of westerns on television. John Wayne films, directed by John Ford, before I knew who John Ford was. I think those were very influential in my enjoyment of movies."  (Click here to read the whole interview) Okay, so he enjoyed westerns. It doesn't prove Star Wars is a western in disguise. This is only my opinion, after all.

Think analogy. Let's consider the setting of Star Wars too. Skip the whole Princess Leia vs. Darth Vader confrontation on his ship and go straight to Tatooine -- a desert planet. Reminds me of New Mexico or west Texas (except it was filmed in the Tunisian desert) -- and the "ranch" Luke Skywalker lives on is actually a moisture farm, scratching out a sparse living (much like any desert area in the old west.) The "droid" robots could be imagined as the "cattle" -- except they help work on the farm tending "vaporators." 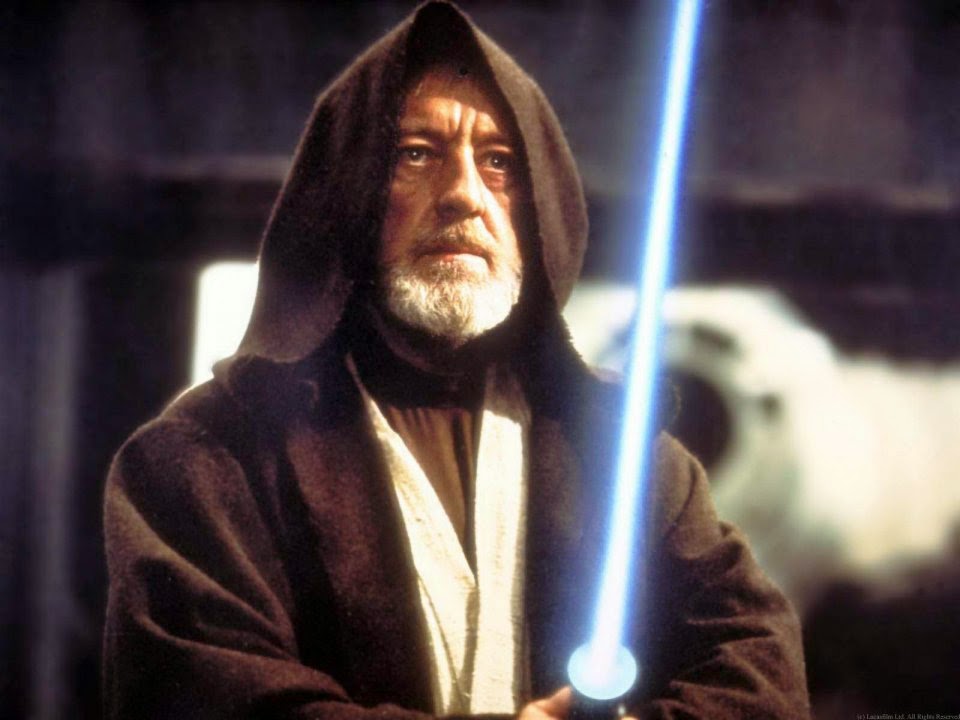 Okay, let's go back to Princess Leia, who cannot escape from villainous Darth Vader. Her droid robots C3PO and R2D2 use an escape pod to avoid capture and land on Tatooine, where they are "rustled" by the Jawa creatures to be sold to the highest bidder. And that's how they end up at Uncle Owen's farm. Luke takes on a quest to find the reclusive Obi Wan Kenobi that he knows as Ben Kenobi (consider him to be an old west "sheriff" since the Jedi masters once kept order using the Force and their light sabers). 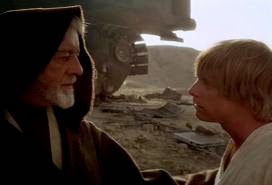 Luke engages with Tatooine's Tusken Raiders (think native Americans) before Ben Kenobi rescues him. This cements a bond between them, making Luke his mentee, especially after they discover that Darth Vader's "soldier" or Stormtroopers destroyed the Jawa transport as well as killed Luke's aunt and uncle at their farm. Luke has no choice but to join Ben Kenobi -- who gives Luke his father's light saber (as deadly as a Colt or Peacemaker in the old west). The mentee becomes the "deputy" with this weapon and must learn to use it. And while these lessons take place later on on a space ship, Luke and Ben could easily be standing anywhere in the old west shooting tin cans off a fence.

Ben and Luke (and the droids) head to the "den of scum and villainry" called Mos Eisley (which could be Dodge City, Deadwood, Tombstone) to find some way of escaping the villains. Enter Han Solo, mercenary -- think of him as a hired gunslinger -- who makes a deal with Luke and Kenobi at the cantina. But first, Han runs into a bounty hunter -- and ends up killing Greedo first. Harrison Ford was a natural in this film. His first credited role was in the western A Time to Kill before he appeared in Gunsmoke, The Virginian and Kung Fu, and after his Star Wars and Indiana Jones series of films, played a villain in Cowboys and Aliens. And after shooting the bounty hunter, Han Solo tosses a coin to the barkeeper and says, "sorry about the mess." Classic! He struts off, his blaster once again holstered and tied to his leg. 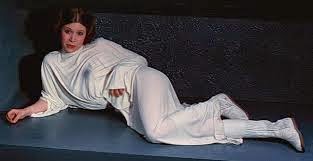 Since Princess Leia didn't cooperate with the villainous Darth Vader (the real bad guy), she was sent to "jail" -- and Luke talks Han into rescuing her. She is the love interest, after all, like any western "damsel in distress." Plus Ben Kenobi (the sheriff, remember) must confront the villain Darth Vader -- Ben believes only he can defeat him. Luke and Han (deputy and gunslinger) end up in trouble during the rescue and Leia must save the day (a nice twist), but they end up jumping from the frying pan into the fire. (In case you haven't seen Star Wars, I'll keep the details vague.) And the ultimate showdown between Darth Vader and Ben Kenobi (villain and sheriff) sends Luke (deputy) into a further showdown with the enemy.

Okay, that's enough proof for one post. I suppose I could go on and talk about the other films in the series, but Star Wars (A New Hope) is enough for now. And check this out! I stumbled over this site when researching about Star Wars' characters -- they "rebooted" them as collectibles. Click here if you're interested in seeing the West Wars figures. Here's a picture of them. Pretty wild. 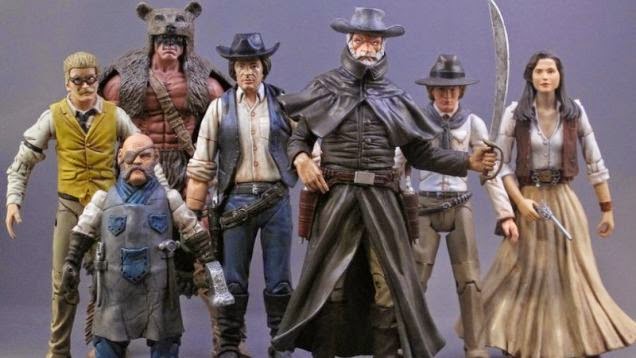 Oh, my boyfriend back then (now my husband) and I ended up seeing Star Wars at least sixteen times. That movie was far better than anything else released that year -- and we saw more things we missed the first few times. We're still total fans to this day of the original three films, as is our daughter. May the Force be with you! And happy trails to you as well.