After a brief hiatus, we are ready now to return to the rough-and-ready fictional cowtown of Wolf Creek, Kansas. For those unfamiliar with this series published by Western Fictioneers, you're missing out -it's almost as fun to read as it is to write.

Each of our writers -there are currently over two dozen -creates one or two unique characters to be citizens of our little community. Our books are either short story anthologies, in which the authors delve more deeply into their characters, or collaborative novels in which each chapter is written by a different writer, from their character's POV.

We have two such novels to present now (we'll tell you about the second one tomorrow.) They are closely connected, in that each of them continues the mini-saga of Wolf Creek's citizens resisting the threat of evil cattle baron Andrew Rogers, who wants to take over the whole county as part of a grandiose plan to advance his political and financial ambitions. 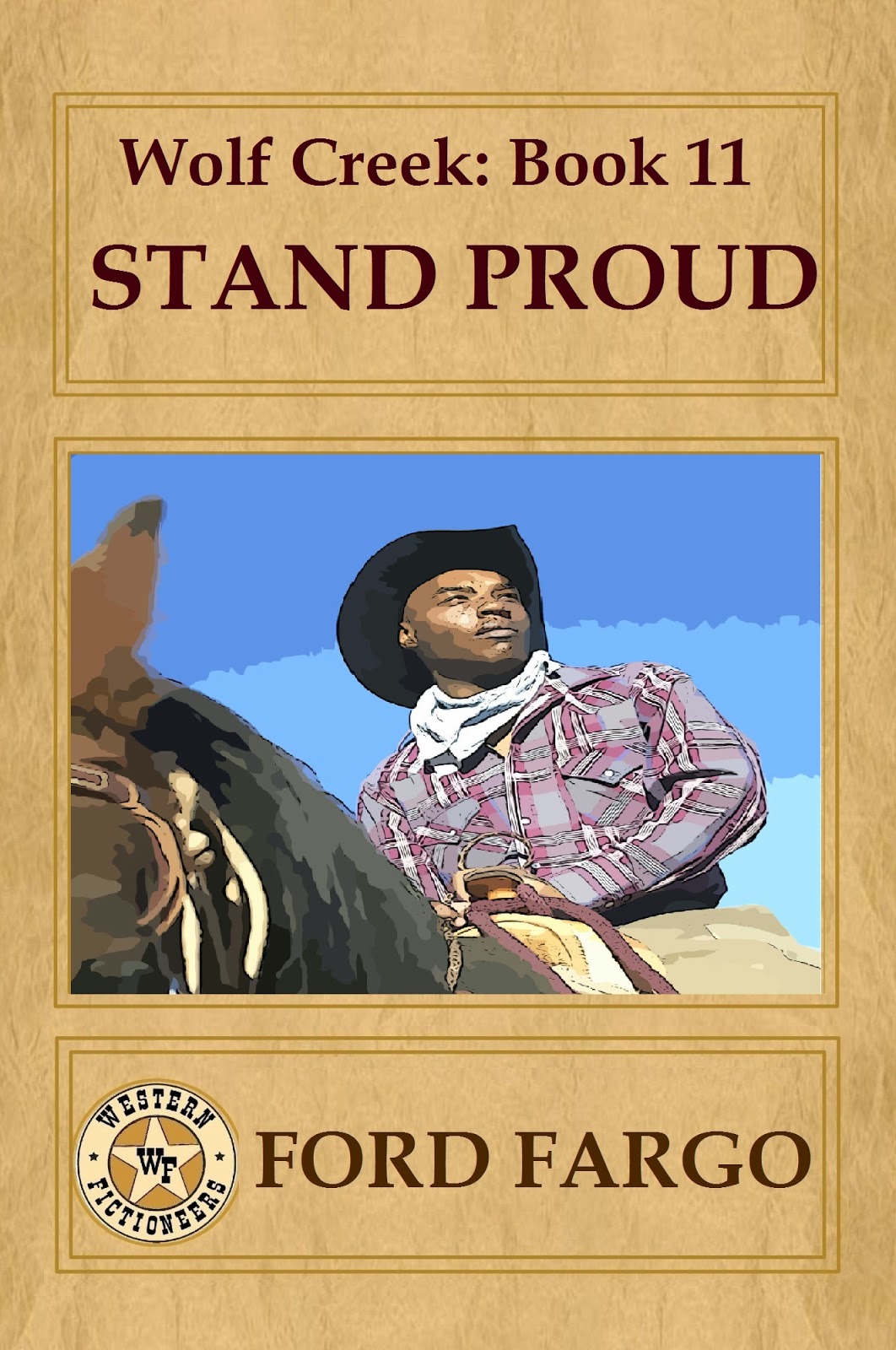 In this volume, STAND PROUD, Rogers has two targets- the Norwood Dairy, run by Gib Norwood (and his two octaroon half-brothers, sons of his father's slave Glory), and the nearby hamlet of Matthias- a town founded by ex-slaves trying to make new lives for themselves in the West. Without giving too much away, Rogers's small army of hired killers attack both places and the Wolf Creek forces are divided. Only a small and hardy group is on hand to face the horde of gunmen attacking Matthias, in hopes of holding them off until the main posse arrives. The Matthias defenders are led by newly deputized leather-worker (and an ex-slave himself) George Alberts.

We're going to leave you with a brief excerpt:


George took a deep breath and turned his attention to those who were willing to join him. “Thank you, gentlemen. Raise your right hands, and I’ll try to remember how this posse oath goes.” He thought a moment. “Do you solemnly swear to do your duty?” They all answered in the affirmative.
“That’s close enough for me,” George said. “I hereby declare us a posse. Let’s ride.”
Charley leaned forward in his saddle. “One more thing,” he said. “I don’t live in this town, I just drink here sometimes, so I reckon I’m free to speak my mind. All the rest of y’all can go to hell.”
Some of the townspeople flinched at being spoken to in such a way by a Negro. Or by an Indian. Or by whatever Charley Blackfeather was. But no one said a word, because whatever Charley Blackfeather was, it could often be very scary.
“All right,” George said, and scanned over his first official posse. Emory Charleston and Charley Blackfeather. Asa Pepper. A farmer, a lawyer, a schoolteacher, and a gangly youth who worked at the general store.
“Robert,” George said to young Gallagher. “I know you said you’re healed up, and I know how much sand you got. That’s why I need you for somethin’ else. Somebody needs to ride hard, and I mean hard as hell, to the Norwood Dairy and fetch the other posse. Tell ʼem to come join us at Matthias—sounds like we’re gonna be way outgunned, but if we can get there before the Rogers bunch, we will hold ʼem off till Sheriff Satterlee and the others can reinforce us.”
“If you’re outnumbered, you’ll need me,” Gallagher protested.
“You right,” George said, “but I ain’t sure I can trust any of these people stayin’ behind to fetch the sheriff as quick as I think you would. It’s the most important job, it could mean all our lives.”
“All right,” Gallagher said, reluctantly.
George nodded to the youth, who was already in the saddle, and Gallagher sped away in a cloud of dust.

Check it out today- and if you haven't read the first ten, shoot, find 'em and see just how much fun they are!
AMAZON
SMASHWORDS