Raising an Adobe House
How to make adobe bricks and their properties were discussed in Part 1 on Saturday, July 19.

Now that we know how adobe bricks are made, let’s build a house. As with any style of housing, adobes varied significantly in quality even though the same basic materials were used. It depended on the owner’s affluence, resources, preferences, help, and time.
In the 1800s a cheap built peon’s casa adobe was extremely simple with few amenities. I’ve spent the night in a couple that are still used as outbuildings on ranches. The ground was merely leveled and construction began—no foundation. Sometimes a several inches deep trench was dug to set the first course of bricks. Some dug a shallow trench and placed thick flagstones as the foundation. These are the ones most likely surviving today.
Bricks are laid one course at a time all the way around the building so there is no weight buildup on any one portion. That might cause an uneven wall as the heavier section settles before the rest. This includes interior walls. The mortar was the same as the brick material, but without straw. It was of course of a different consistency, perhaps a little wetter to make it more workable. The mortar work usually looks sloppy—not like the neat smoothed mortar seams we see in conventional brickwork—if the interior and exterior are to be plastered.
Heavy timber or log lintels crown doors and windows to support the bricks above these openings. Plank door and window frames, the latter often with shutters, are secured to the walls by screwing or nailing the fames into “gringo blocks”—wooden blocks set in the place of bricks.

The wall here is unusual in that it is so thin. Note the lighter colored wooden "gringo blocks" set in the edges of  of the door and window openings to which frames will be attached.

Peons often had only packed dirt floors. Some laid a clay and sand mixture which was smoothed and buffed to make it quite durable. Others laid a layer of sand and paved it with flagstones and adobe mortar grout. Another method was to lay and grout adobe bricks. 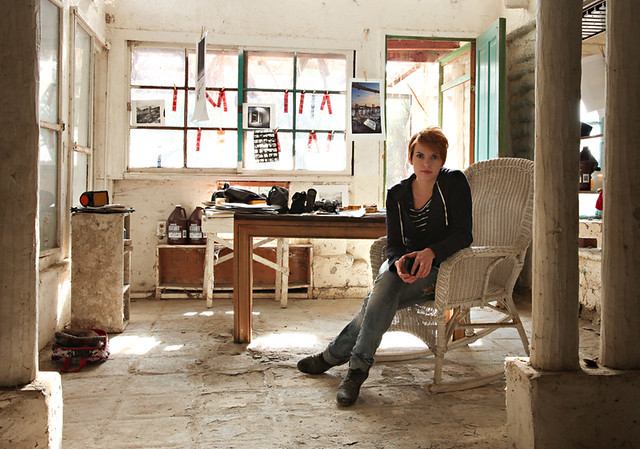 An old adobe updated to a office. Behind the open door can be seen an un-plastered adobe wall and the floor is paved with adobe bricks.

Stucco-like plaster, usually with more sand than regular adobe mortar, was plastered 3/4 to almost 2 inches thick on interior and exterior walls, the exterior only if cost was an issue. This protected the bricks from weathering, especially rain which severely erodes adobe over time. Un-plastered interior walls do generate dust so if not initially plastered, may of have been later. Sometimes 1-1/2 to 2 feet high rock-facings protected the bases of exterior walls from rain-splatter. Regardless, there are old un-plastered compound walls well over a hundred years old, and while heavily eroded, are still sound.
Thick walls are needed not only support the heavy walls and roofs, but to insulate the building. Mexico and the Southwest is a land of climate extremes. During the day the sun heats the thick walls insulating the interior. After sunset and the temperature drops, the heat transfers into the house. It will not keep it toasty warm all night, but it helps. By sunrise the interior has cooled as has the exterior wall and the process starts over. A veranda, especially on the south side of the house, shades the walls and keeps the interior cool longer. A veranda supported by adobe or stone arches is especially effective sun protection. High ceilings allowed hot air to rise. Windows were located not so much for the view, but for air circulation.
Roofs were supported by 8-10-inch diameter beams called vigas, usually no longer than 15 feet—the characteristic log ends jutting from adobe roofs. Wider buildings have a central load-bearing wall to support spanning vigas. They were set 2-3 feet apart. Spruce and Ponderosa pine are popular due to their resistance to splitting as they dry. Overlaid perpendicularly to the vigas was a thick layer of 1-2-inch diameter limbs—the latías. This is usually mesquite, but carrizo cane is also used. A layer of adobe mortar was spread over this to seep between the latías bonding them. Adobe bricks are laid on the mortar, often a bit thinner and wider, or square-shaped, compared to wall bricks. They are grouted and another layer of mortar laid followed by a second course of bricks. These too are grouted and a third layer of mortar spread. Most roofs are flat, but some had the slightest rain-draining slope. Modern roofs have cement in the mortar, but more commonly low pitched title roofs are used today. A poor man’s roof was adobe mud with a higher clay content, then a thick layer of packed dampened earth, and then a layer of mortar. This would have to be replaced after several years. Modern adobes have plastered ceilings.

To the right of the door is a small entry courtyard. Vigas supporting a bedroom roof are to the left.

Adobe houses were typically long and comparatively narrow, a series of rooms set end-to-end. There might be a door in each interior wall, but some rooms at least could only be entered from outside doors. There were no hallways. Owing to the massive weight of adobe bricks and the lack of structural supports other than walls, seldom will adobes higher than two stories be seen.
As rugged as they are, adobes were particularly susceptible to earthquake damage. Modern building codes in Mexico and America require structural steel or reinforced concrete support. An 1800s lead rifle bullet or even a modern full-jacketed bullet will not penetrate an adobe wall (I’ve tested it).
Adobes are interesting structures to which scant attention is given. Now that you’re a little familiar with these buildings, it might provide a bit of color in your writings. In The Hardest Ride I briefly describe the adobes on the DeWitt Ranch in south Texas. In the coming sequel, Ride Harder, I provide more description of the old six-room adobe ranch house Bud and Marta take over.
Posted by Gordo at 12:30 AM