Writing About Indians When You're Not One: Words

Not long ago I was asked to look over a manuscript that was set among Dakota Sioux Indians before white contact. One thing that jumped out at me was the usage of certain words: papoose, squaw, wigwam. These are all words we tend to associate with Native Americans -in fact, no matter our generation, most Americans were taught in elementary school that "this is the Native American/Indian word for fill-in-the-blank." So on one hand it seems perfectly natural that a non-indigenous writer would put these "Indian" words into the mouths of their Indian characters. But for me, it immediately jumped right out. 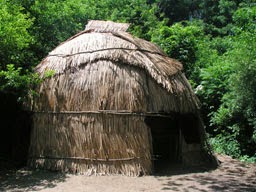 What makes these words the "Indian" words?

First, you have to realize (and we all do) that there are hundreds of different languages and dialects that have been spoken by native peoples in North America; some of those languages have died out, but many others have been preserved. The study of those languages is fascinating, and sometimes surprising: for example, did you know that the Athabaskan language group is spoken by tribes in three regions -Alaska and the Yukon, Oregon and Northern California, and the Navajos and Apaches of the Southwest? They don't all speak the same language, of course, but their languages are similar -just as Spanish and Italian are similar as Romance languages, and distantly related to other Indo-European languages like German and English. This tells us that once, a very long time ago, they were the same group of people, and their languages grew apart as some groups migrated southward.

If we are writing fiction set among indigenous tribes, unless we are literally writing in the actual language they spoke, our dialogue is implicitly the English translation of what the characters are actually saying. So then, what is it that makes us want to have an Apache or a Modoc saying "squaw" instead of woman, or "papoose" instead of baby? 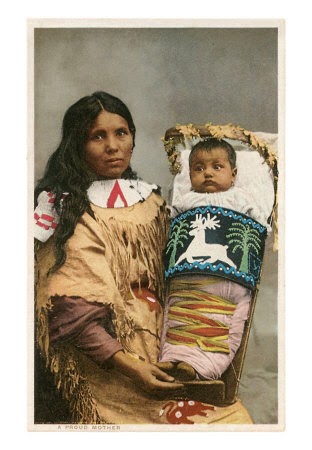 Well, let's take a look at the origins of some of the words we associate with Indians.


The last term, tipi, is a structure that was used by Plains Indians. Like a lot of things Americans have tended to regard as quintessentially Indian (the feathered warbonnet being another), this is  a relatively new (or newish) addition to the English lexicon, in large part because the U.S. Army's struggles with those tribes is among the most recent in our memory.

Also, apart from the possible Mohawk (an Iroquoian language) etymology of squaw, they all come from tribes who spoke/speak languages in the Algonquin family.

Who are the Powhatans? As you probably know, those were the Indians encountered by English colonists in Virginia in 1607.

Want to guess what part of the country the Narragansett, Massachusett, and Penobscot tribes are from? Yes, New England- along with Wampanoags and Pequots, these were the tribes encountered by the English colonists known as Pilgrims in the 1620s. 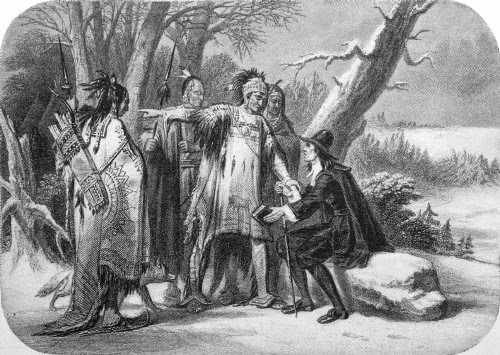 So then, many if not most of the words we think of as "Indian" terms came from the very first tribes the English colonists met in the New World. "Oh, so this is the Indian word for baby," one can imagine them saying -and since so many of the tribes in the region spoke Algonquin dialects, the words may have even been very similar in many languages. They were then absorbed into the colonial vocabulary, particularly associated with Indians. So far so good.

But two hundred years later, those colonists's descendants were on the Great Plains, expecting Lakota and Arapaho people to call their babies papooses, since after all that is the "Indian word."

Did Sioux Indians ever use the word "papoose"? I'm willing to bet they did. And I'm willing to bet it was because Americans used that word with them, thinking it was their word, and as a consequence our conjectural Sioux probably assumed "papoose" was the white people's word for baby, so he used it when speaking with them.

But if you are writing a story about Cheyenne Indians, or Pueblos -especially if it is set before contact with English-speaking peoples -and you have them saying papoose, or wigwam, you are being very inaccurate.

"But what should I say instead of 'papoose'?" you may ask. How about either finding out what that tribe's word for baby actually is... or just say baby.

On the one hand it seems very ironic -and on the other hand it is totally unsurprising -that Europeans formed opinions about what Indians were "supposed" to be, and applied it generally to every Indian tribe, then started projecting what they saw as authenticity onto Indians without ever thinking to ask them if it was right.

For a complete archive of the entries in this blog series, GO HERE