Review Roundup: From the Table to the Grave 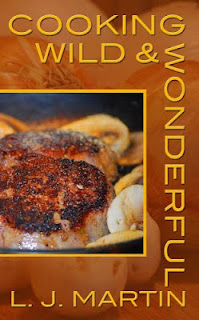 One of the primary reasons folks read western novels is a desire to live, vicariously, an adventure populated by larger-than-life characters attempting to tame a wild land. Imagine a cookbook that delivers a similar experience.

L.J. Martin’s Cooking Wild & Wonderful is a delight—not only because Martin’s recipes please the palate, but also because his writing entertains. This is a cookbook people will want to read, not just prop up in the kitchen during meal preparation. Much more than a collection of how-to’s, Cooking Wild & Wonderful is a cultural reference that evokes the spirit and flavor of the West.

Martin takes cooks and wannabe-cooks by the hand and fairly yanks them into a philosophy of food—and in a much broader sense, life—that is charming and liberating, awash with color and brimming with adventure. Game recipes comprise a very small part of the mix; instead, the “wild” in the title refers more to abandoning supposed rules and taking risks. Risk is relative here, though, because Martin’s chatty, colloquial voice is nothing if not encouraging. Although one definitely gets the impression Martin would be as at home in a chef’s kitchen as on the trail, his recipes and advice are easy to follow, from simple fare with uniquely flavorful twists to multi-course gourmet meals.

No matter how tasty the food, however, the flavor of the text, replete with stories of real-life cowboys and country folk, is what sets the book apart. 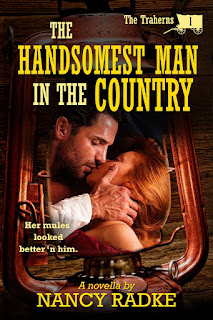 Orphaned by the Civil War, an 18-year-old girl from the hills of Kentucky heads west on a wagon train, only to discover the devils she knew at home may have been preferable to the devils in disguise she encounters along the trail.

Despite a couple of formatting, word-choice, and punctuation glitches, The Handsomest Man in the Country is an excellent read, mostly because author Nancy Radke nailed an unusual—and unusually charming—character voice. (The writing could use a substantial infusion of commas, but even that perceived shortcoming fades into insignificance behind the sheer enjoyment of the reading experience.)

Marketed as a sweet romance (no harsh language or sex), the story follows the standard romance protocol only in that it ends on a happily-ever-after note. Don’t expect to find overwrought musing about romantic love on these pages. The characters are much too busy surviving to moon over each other.

Handsomest Man is told in first-person, which represents a significant risk for the author. The music of the hills is in the way Apalachian people think and speak. Attempting to render such a distinctive patois in prose without losing readers is challenging, but Radke did an admirable job. Little of the language is presented in dialect (phonetic spelling, elisions like dropped Gs, etc.), but the sentence structure, word choices, and rhythm of the writing all evoke the color and flavor of the unsophisticated, hardscrabble, pragmatic attitude of the area.

Writers often are cautioned about using dialect, because it can be tiresome to read. Radke's novella demonstrates how smoothly and respectfully dialect can be suggested without resorting to trickery or parody. 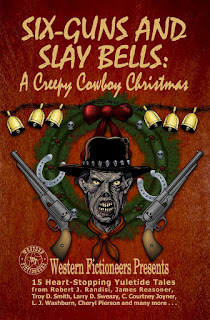 For the Love of a Woman
By Charlie Steel
From Rope and Wire Western Short Stories, 2010
3,850 words

In Joshua’s Voice, the sole survivor of an ill-fated westward wagon trek grows from helpless child to savvy wilderness dweller with the help of a mysterious, omniscient presence that, by revealing itself, endangers the fabric of the cosmos. Sometimes harsh, sometimes amusing, and sometimes tender—but never creepy—the story evokes comparisons to the Star Trek episode “Metamorphosis,” though Joshua’s Companion remains invisible. By the time Joshua discovers his destiny, readers will mourn the Voice’s sacrifice. (A review of the entire Six-Guns and Slay Bells anthology is forthcoming.)

For the Love of a Woman observes a husband and wife as they struggle to keep their farm and their marriage together. Tangled in daily-life struggles as they are, the pair have forgotten the language of love and seem able to interact only by hurting one another in little ways. Though they try to recapture the spark that first drew them together, life’s disappointments always seem to interfere. The arrival of an orphan train changes the dynamic of their relationship in ways that warm the heart. The story was a second-place winner in Rope and Wire’s 2010 short-story contest and is available as a free read on Steel’s website, CharlieSteel.net.


Kathleen Rice Adams is a Texan, a voracious reader, a professional journalist, and a novelist in training. She purchased Cooking Wild & Wonderful and The Handsomest Man in the Country, and received review copies of Joshua’s Voice and For the Love of a Woman from the author. Her opinions are her own and are neither endorsed nor necessarily supported by Western Fictioneers or individual members of the organization.
Posted by Unknown at 9:51 AM