This is the second installment of our regular series wherein we take a closer look at the characters and writers of our collaborative novel series, Wolf Creek. 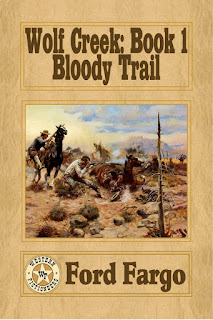 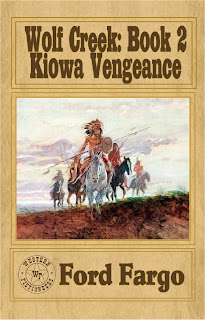 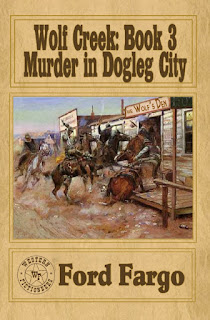 This time -since it's Black History Month- I decided to focus on one of my characters, the Black Seminole Scout Charley Blackfeather.

Charley Blackfeather's father was a runaway slave from Georgia taken in by the Seminoles in Florida (having a Seminole mother makes you a member of the tribe.) Charley grew up in Seminole territory in the Everglades. As a teen and young man he fought against the US in the Seminole Wars, in the band of Black Seminole leader John Horse, one of the last bands to surrender- the US removed them to Indian Territory in 1848. Like most anti-slavery Creeks and Seminoles, he fled to Kansas in 1862 and joined the Union Army (Creek and Seminole governments were pro-Confederate.) Charley's wife and children perished during the Flight of Opothleyahola, when pro-Union Indian refugees were attacked by Confederate forces.

Now he works part-time as a cavalry scout, and makes extra funds by trapping and hunting for hides. He has no permanent base, spending most of his time on the prairie or with the cavalry when there is trouble. He drifts into Wolf Creek fairly often, to barter with Casto Haston the tanner and have a drink or two at Asa’s place.

Appearance: 6’2”, 200 lbs, all muscle. Seminole / African American- wears a single long braid. Most likely to be dressed in canvas pants, high-topped beaded moccasins, black vest but no shirt except in winter (then he favors a white shirt and a sheepskin coat), and a blue cavalry slouch hat (with insignia) adorned with a single crow feather. Carries an Army Colt, a Bowie knife, a steel tomahawk he can throw with deadly accuracy, and a ’66 Winchester yellow boy. He also carries a bow (for those quiet jobs) that he keeps on his horse.

Speaks English like any average black man from the South. Speaks Muscogee (Creek) as a second native language, and fluent Spanish. Also fluent in Cherokee and Choctaw, and pretty good Chickasaw, Cheyenne, Arapaho and Kiowa –with some very basic Comanche and Apache. Does not read or write.
Charley is around fifty years old, but looks 10 or 12 years younger. If Wolf Creek were
a TV series he'd be played by Dennis Haysbert, of 24 and The Unit. 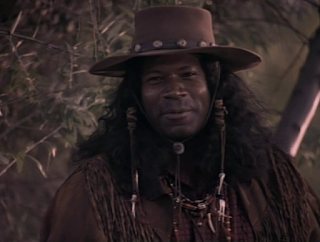 Dennis Haysbert as Jack Jackson in Return to Lonesome Dove

I decided to answer the same questions I asked Clay More last month...

1) What is your favorite scene among those you've written for Charley Blackfeather?
I think it is the scene where he and the cavalry captain Dent are talking about the Kiowas, while the cavalry troop is camped for the night in Kiowa Vengeance. In his explanation of the Kiowa leaders' intentions -father and son -as well as his perception of the physical ailment Dent has been hiding from everyone -he demonstrates both his empathic skills and his attention to detail others would not consider:


“I think Old Mountain is sincere,” Dent said.
“So do I,” Charley agreed. “He’s no coward, and he’s nobody’s fool. He knows that to keep resisting will mean the death of his people—not just the warriors, but the women and children. Stone Knife hasn’t figured that part out yet—or he has, and he just doesn’t care. He’s fighting for pride, like most young men.”
Dent shook his head sadly. “I honestly don’t know what I’d do, if I were in their place.”
“I’ve been in their place,” Charley said. He chuckled softly. “I reckon you was most likely in short pants around that time. My people fought the Army for years, back in the Florida Everglades. My leader was a man named John Horse—hell of a fighter. Even we eventually had to surrender, though, or see all our children die. They sent us out West, to Indian Territory.
“So I’ve been in both their positions—Old Mountain and Stone Knife. You have pride and honor, and you don’t want to give up your home and your way of life. But in the end you have to make sure there are still some of your people left alive. You do what you have to do—you don’t like it, but you do it and try to make the most of it. And that way there’ll be future generations—to remember what and who we was, and what and who they are. And that way we live on.”
There was silence for a moment, and then Charley Blackfeather laughed. Not a wry chuckle, but a full, booming laugh.
“I swear, Captain,” he said then. “I got to quit listenin’ to your stories, you done got me all wound up, too. I reckon that’s more talkin’ than I’ve done in weeks.”
“When you do talk,” Dent said, “it’s usually something worth saying.”
“I don’t know about that, so much,” Charley said. “But I’m done spoutin’ off, for tonight anyways.  I’m gonna grab some shut-eye my own self.”
Charley turned to go, then paused. “I almost forgot,” he said, taking a small pouch from his belt. “This is for you.” He handed the pouch to the captain.
“What is it?” Dent said.
Charley grinned. “Them piles is hell, Cap’n.”
Dent was confused.
“Hemorrhoids,” Charley said. “I seen how you been favorin’ your ***. This here is a poultice, ought to make things a mite smoother for you in the saddle tomorrow.”
Dent nodded, embarrassed. “Thank you.”
Charley grinned again. “You got to put it on your own self, though. Good night, Cap’n.”

2) What is Charley's biggest strong point?
I'm tempted to say either his empathy or his attention to detail, mentioned above... but I think it is really his spirituality. He sees everything as he walks, as some Indians say -not just the physical things, but the spiritual as well -and usually manages to maintain a calm balance. Though sometimes his temper disrupts things- but that is almost always because someone else has disrupted the balance, and he intends to set it right.


The Rebs gathered their wits quickly. A fusillade rained on the fleeing soldiers. Charley felt the bullets plow into him. One in his right shoulder, another breaking a rib in his back, a third in his left hip. He leaned close to the horse’s neck and held on, as if he could outrace the bullets. He never looked back.
But he survived. He escaped. The other three did not. Charley spent the last months of the war healing. His dreams were haunted for some time by Danby and the young man with the Cherokee face.
And now fate had brought them back together. Some people would regard that as an incredible coincidence. Others would realize that it was not so incredible—that Kansas and Missouri comprised a world much smaller than one might expect, and that the war in those border states was a web whose strands connected everyone in one way or another. Truth to tell, there were probably several former Union Jayhawkers and Confederate border ruffians living in Wolf Creek, interacting every day, and that was only to be expected. This meeting, such people would say, was no different.
But Charley Blackfeather knew better. He knew that there was a symmetry to the spirit world, that led inevitably to balance. When he saw Danby and McCain on the streets of Wolf Creek, Charley knew that it was the drawstrings of nature pulling them all together. He had privately concluded that Wolf Creek was a mystical place, imbued with powerful medicine—a thin place between worlds, that drew lost souls to it with the suction of a whirlpool acting on driftwood.
Of course, he would never be able to explain his beliefs on the subject to white folks. He didn’t have the words, and they didn’t have the ears to hear.
But here he sat, beside a ghost from his past, and he knew it was so.

3) What can you tell us about what is coming up for Charley?

In Book 5, Showdown at Demon's Drop, Charley goes way out on a limb for the safety of his new friend Derrick McCain. Beyond that, I'm not sure- but he'll be turning up a lot. 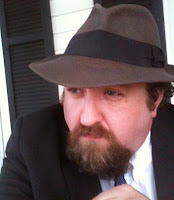