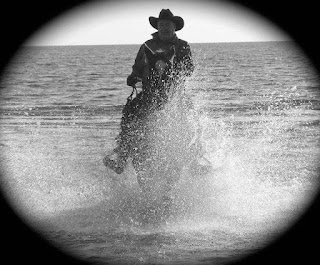 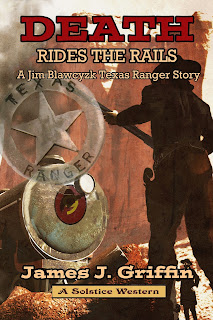 Howdy, and welcome to this week’s edition of Six Sentence Saturday. I’m Jim Griffin, and I’ll be your host for today. Later on, I’ll be placing names in my Stetson and drawing one name at random from all today’s commenters and visitors. That person will receive an autographed copy of my latest book from Solstice Publishing, Death Rides the Rails, A Texas Ranger Jim Blawcyzk story (or an ebook if the winner is from outside the United States, since the Postal Service has just jumped shipping rates tremendously). So make sure to leave a comment before you check on out. And speaking of Death Rides…

“Conductor, I insist you tell me why this train is being delayed. Immediately!”
In vain, a flustered Mike Hardy, chief conductor on the Texas and Pacific’s Shreveport-El Paso Limited, looked around the crowded Dallas station platform for help.
“I’m sorry, Miz…”
“It’s Mrs. Mrs. Isaac Hollister,” the middle-aged matron snapped. She waggled her finger under his nose. “I demand to know when we’ll be on our way.”
“As I’ve already explained, Mrs. Hollister,” the harried conductor replied, “I really don’t know any more than you. I can only tell you we have orders to wait for the local from Austin, and it’s late. There’s a passenger on that train who must make his connection with this one. I checked with the station agent a few minutes ago, and he assured me the Austin train will be here within a half-hour. Once it arrives and the passenger transfers, we will be on our way, I assure you.”

So, fairly innocuous start to the story, right? We have an fast passenger train being held for some V.I.P., probably an important businessman or prominent politician. After all, it must be some really high and might muckety-muck for the Texas and Pacific to delay their crack express.

The only thing is, the person the train is being held for is Texas Ranger Lieutenant Jim Blawcyzk, and his one man horse, Sam. Jim will be riding the train to what should be a routine assignment up in the Texas Panhandle. Unfortunately, a gang of outlaws have other plans. They wreck the train, kill the engineer, fireman, and messengers, and loot the express car safe of $20,000.00.

Jim barely survives the flaming wreckage, but after helping the survivors, the badly injured Ranger goes after the men responsible for so much death and destruction. However, what at first appears to be a simple train robbery turns out to be something much more sinister. The robbery is part of a much larger plot to destroy the Texas and Pacific Railroad. Jim finds himself in a race against time to ferret out the men behind the plans, before they cause even more mayhem.

Death Rides the Rails was originally released as a self-published book, Trouble Rides the Texas Pacific. Nik Morton at Solstice liked the original and picked it up to add to the Solstice catalogue. Thanks to Nik and fellow Western Fictioneer Charlie Whipple, who did a fantastic job of editing, this is a much improved version of the novel.

Since I’ve always been interested everything Western and particularly in the Texas Rangers, when I started writing (thanks to the encouragement of another Western Fictioneer, James Reasoner), it was only natural I would write Texas Ranger novels. Jim’s unusual last name is Polish, a tribute to my Polish ancestors on my mother’s side, and to the many Poles who settled in Texas in the 1850s. Like all my stories, there is plenty of action, and good guys who are unequivocal good guys. Most of my books are suitable for anyone from age ten and up. You can let your grandma read them and not be embarrassed.

If you like a good, traditional, action-packed Western, (and you want to learn how to pronounce “Blawcyzk”) I hope you’ll order a copy of Death Rides the Rails. It’s available in print and as an ebook from the publisher at www.solsticepublishing.com, through Amazon, Barnes and Noble, and other online retailers, and autographed copies are available through my website at www.jamesjgriffin.net, or drop me a note at PO Box 1714, Keene, NH 03431. If you get a chance, check out my site for information on my other books, and also to see me and my horse Yankee doing some of our therapy work and tricks.

Next time I’m blogging here at Western Fictioneers, February 7th, we’ll be talking horses. Want to know what a pie-biter is? Stop by and find out.

Adios for now. See ya down the trail, and thanks!

Photo credited to Susanne Hall
Posted by Livia J Washburn at 1:00 AM