In the town of Rimrock, a man named Stan Ruggart was the town drunk. He was a sight different than the kind of town drunk played by Dean Martin in Rio Bravo; Stan Ruggart was rich. Filthy rich. And he had a feeling someone was out to get him.
Matt Stryker, the marshal of Rimrock, regularly hauled Ruggart off to the hoosegow after he passed out on the street or in the town’s single bar. Ruggart’s ex-wife, despite the fact that she ran out on him and left their only daughter with him to raise, felt she should have all his money. He divorced her. Then the sparks began to fly.
Ruggart left a thick envelope with Stryker, who promised to open it if Ruggart died. Naturally he did. And the buzzards gathered.
The first line we read about the wicked woman who was once Stan Ruggart’s wife is:
Elizabeth Wharton wanted it all.
How’s that?
Then the line she says near the end of the chapter is:
“Stan Ruggart’s got to die.”
Very nice woman. And as you might suspect, she and her paramour hire an assassin to kill Ruggart, which he does.
Then Matt Stryker gets shot in the back. Well, would have been in the back if he’d not turned just as the shot came. Miss Wharton? Nope. There’s another vengeful woman after Matt Stryker. Melanie Powers, sister of a man Stryker put away.
Fortunately, Matt Stryker’s got a woman on his side, too. Her name is Catherine de Merode, a woman of Belgian nobility. And she’s the one who takes care of Matt’s woman problem. I think it’s worth plagiarizing from the book. 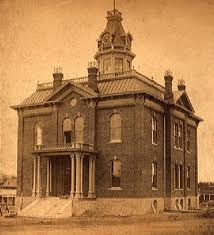 The courthouse in Prescott where Stryker had Ruggart's will probated.
Fight scene from Road to Rimrock
When Melanie rose she was clutching a small knife. ‘Bitch,’ she hissed. ‘I’ll carve your gizzard into little pieces.’
Catherine smiled. ‘I think not,’ she said. Slowly, she backed away from the table and into an open area.
Melanie stalked her, knife held low and to the side.
Catherine stopped and faced Melanie, her arms hanging naturally, her fingers slightly curled, her feet shoulder-width apart. She still wore the little smile.
‘You laughing at me, bitch?’ Melanie’s voice dripped venom. ‘We’ll see how much you laugh with your belly slit and your guts dragging on the ground.’ Melanie moved in a circle around Catherine, staying some distance away at first, and then slowly narrowing the gap.
As Melanie circled, Catherine turned. The little smile never left her face, but it came nowhere near her eyes.
Melanie dropped her eyes and lifted the knife. She took a big breath and lunged, but Catherine was not there. She’d spun aside and now stood a good ten feet away, smiling.‘Surely you can do better than that,’ she said.
Melanie’s face contorted. She growled like a wild beast. Spittle formed little patches of cotton in the corners of her mouth. She crouched, knife held low with its cutting edge up. Again she lunged at Catherine, the blade of the knife held horizontal to the floor, waist high, and ready to slash across Catherine’s abdomen.
Catherine whirled in time with Melanie’s rush, lifting her left leg as she spun and smashing her foot into the side of Melanie’s face in a classic savate kick. Melanie went down on all fours, dazed. The little knife skittered across the floor to fetch up against the skirting-board. Catherine scooped the knife up, then delivered a kick to Melanie’s ribcage that knocked her breathless and lifted her up and on to her back. Catherine dropped on to the prone woman, her knees pinning Melanie’s arms to the floor. Melanie mewled in fear. Catherine laid the tip of the little knife at the corner of Melanie’s left eye. ‘Miss Powers, I hear you have a vendetta against Matthew Stryker. Let me warn you. If he is injured or killed by anyone even remotely connected to you, no matter how nebulous that connection, I will personally hunt you down and cut your eyes out. Do I make myself clear?’
The whites of Melanie’s eyes showed. She gulped and opened her mouth, but no sound came out. Tears trickled into her ears.
Catherine pricked at the skin next to Melanie’s eye. ‘Do I make myself clear?’
Melanie couldn’t move without pushing the point of the knife into her own eye. Again she opened her mouth. She panted. She swallowed. Catherine raised an eyebrow.
‘Yes,’ Melanie managed to say.
‘I’m sorry. I couldn’t quite hear you,’ Catherine said.
‘Yes,’ Melanie said, louder.
‘Yes what?’
‘Yes you will cut my eyes out.’
‘Why would I do a thing like that?’
‘If Stryker is harmed.’
‘By whom?’
‘By anyone connected with me.’
‘Good.’ Catherine stood.
Melanie sobbed, rolled over on to her stomach, and struggled to all fours. Then, clutching a chair, she pulled herself upright.
‘You’ll want to take this. It is yours.’ Catherine held the little knife out, handle first.
Melanie’s hand went to her mouth. She stifled a cry, then fled the room, leaving the knife in Catherine’s hand.
When you’re a hard man like Matt Stryker, it’s good to have tough women on your side.
Posted by ChuckTyrell at 6:06 AM