DICE, TINHORNS and RANCHO NOTORIOUS
Dice gambling then and now
Keith Souter  aka Clay More
Marlene Dietrich was one of the Hollywood greats. She became an international star in 1930with her role of Lola-Lola, a cabaret singer in The Blue Angel. Her western debut was in 1939 in the light-hearted Destry Rides Again, playing opposite James Stewart. Then in 1942 she played Cherry Malotte in The Spoilers alongside Randolph Scott and John Wayne. A decade later she played Altar Keane, the femme fatale owner of Chuck-a-Luck, an outlaw ranch on the Mexican border in Rancho Notorious. This was one of the first westerns I remember seeing and I thought it was fantastic.
I was particularly enthralled by it, because of the dice reference, since I was fascinated by everything to do with dice. And of course, Chuck-a-Luck was one of the dice games played in the Old West.

Rancho Notorious was originally to have been called The Legend of Chuck-a-Luck, but Howard Hughes, the head RKO Pictures changed the name. It was probably a good decision, for the name may have given too much of the story away. Rancho Notorious has a great ring to it. 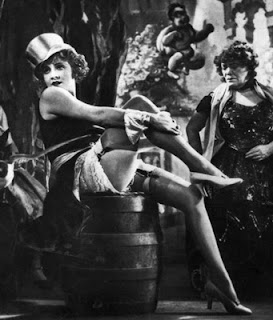 Marlene Dietrich as Lola-Lola in The Blue Angel
Chuck-a-Luck
Chuck-a-Luck was played with a shaker cage, and was a popular gambling game on the frontier. It was sometimes called ‘birdcage’ for obvious reasons, and was also referred to as chucker luck, since it was notorious for helping the unwary to lose money. It was played with three simple dice and a simple arrangement of 6 numbers on a felt sheet.
In Rancho Notorious Altar Keane was a saloon singer who had bet her last $20 on a rigged chuck-a-luck game, but won a lot of money when gunslinger Frenchy Fairmont (played by Mel Ferrer) steps in on her behalf. She named the ranch she would establish in honour of the game.

Interestingly, Professor JB Rhine of Duke University reckoned that the birdcage was uncheatable; hence he chose to use it in his famous ESP experiments in the1930s.
Tinhorn gamblers
Before the shaker-cage or birdcage was introduced, Chuck-a-luck was played in the old saloons using a hazard horn. This was a tinhorn that was generally used to play Grand Hazard; another gambling that was played in slightly more up-market gambling houses. It was actually nothing like the English game of Hazard that would eventually evolve into the great American favorite of craps. It was in fact pretty similar to Chuck-a-luck in that it also used three dice and six numbers on a sheet or board with various odds added at various points to make it look both complex and enticing. Again, the house would pay out evens for one number, 2:1 for a double and 3:1 for a triple.

The tinhorn was a metal cone-shaped horn through which the dice were dropped. Inside it had projections, which ensured that the dice fell out at random. The first ones were made of leather, but these were replaced, especially by small gambling houses or by independents with metal tinhorns. In time the term came to be used for any individual who believed they had superior knowledge or aptitude than they actually possessed. Hence the phrase so often used in the west – tinhorn gambler.
Dice through the ages
Dice have been played for millennia. A tablet found in the Great Pyramid of Giza, dated to about 3,000 BC describes a game of dice played by the gods in order to add five days to the calendar.
Several sets of Senet, a board game played with dice were famously found in the tomb of the pharaoh Tutankhamun (c 1371-1352 BC). Intriguingly, some of these sets have a Senet board on one side and the Royal Game of Ur on the other. The Royal Game of Ur was played in ancient Persia, but may have originally come from India.

The ancient Egyptian game of Senet, played with dice
The Royal Game of Ur was played in ancient Persia, but may have originally come from India. 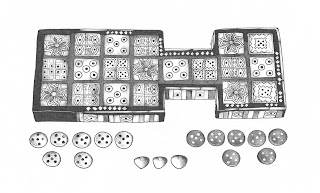 The Royal Game of Ur
Crooked dice
There have been dice swindlers around for centuries. The Museum of London has a pewter box that was dredged up from the mud of the River Thames that is dated to the sixteenth century. It contains 24 crooked dice, including a set of Fulhams, and a number of loaded dice. There were lots of ways that crooked dice could be made and used in order to fleece the unwary.

Of course, casinos now use high precision, transparent dice, which has removed any chance of them being tampered with. Yet still there are many adepts who reduce the odds against them by exerting skilful dice control. This includes setting the dice up in such a manner to reduce the odds of certain numbers showing up and to increase the chances of others. 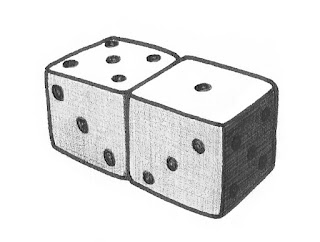 The Flying 3V set up

As I said earlier, I have been fascinated by dice ever since my early years and have made a study of dice games, dice tricks, dice divination, dice lore and all manner of dice games – from the ancient games of Senet and the Royal Game of Ur, to the medieval Gluckhaus and English Hazard, to Chuck-a-Luck and the great American game of craps.


The fruits of my study are collected in The Pocket Guide to Dice and Dice Games. It includes chapters on craps and dice odds, which may just be useful if you are venturing near the casinos of Las Vegas this summer.