I’m going to call this entry the Blizzard Blog, since I’m writing it just after one of the biggest snowstorms to ever hit New England. We now have officially over 40 inches of snow!  Got my pickup out, but the car’s still buried. At least I can get out of the condo now! This morning an eight foot drift blocked the front door, and since the back deck is 20 feet above the ground (I live on a hillside) it’s a long way down, even with three and a half feet of snow to break your fall.

Thought I’d continue last week’s discussion of horses for a bit, toss in a few funny mistakes I’ve seen, then next time get into the Texas Rangers. 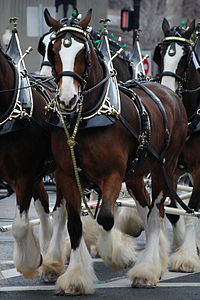 I’ll start off by mentioning this year’s Budweiser Super Bowl Clydesdale commercial. I don’t have television, only use my TVs to watch DVDS, but I’ve watched the commercial over and over on the web. It sure captures the special bond between human and horse. Still get teary-eyed when I watch it.

Now, a few errors and misconceptions I’ve seen or read over the years.

First one was in a western paperback, where the sheriff, telling the posse they have to catch the outlaw before he reaches the mountains, says, “He’s on a palomino. Palominos can run real fast and climb all day.” Of course, a palomino is just a golden colored horse, no faster or slower, or with more stamina, than any other.

Another author described his character’s horse as having “dinner-plate sized hooves” so he could run through the desert sands with no problems. All you need do is imagine a riding horse with hooves that size and you know he’d be tripping all over his own feet. In fact, the quintessential desert horse, the Arabian, has small hooves. 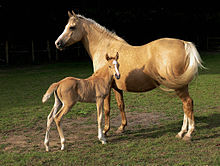 A. Leslie Scott, who created the character Texas Ranger Jim Hatfield for the long-running Texas Rangers Magazine, either didn’t know much about horses or deliberately described them incorrectly. He called Jim’s loyal mount, Goldy, a “golden sorrel”. He’s the only person I’ve ever known to call a horse a “golden sorrel”. There is no such thing. A “golden sorrel” would in fact be a palomino. Why Scott didn’t call Goldy a palomino I have no idea. A sorrel is a variation of a chestnut horse, a coppery, almost fiery red color. A sorrel brushed and groomed will shine like a newly minted copper penny.

Scott also often described Goldy as having a black mane and tail. That’s genetically impossible for a palomino. In addition, he would state that Goldy was eighteen hands high. Eighteen hands is a huge horse, even by today’s standards. Back in the frontier West days, when most horses barely reached fourteen hands, an eighteen hand high horse would have been a giant.

(For those who don’t know, a “hand” is four inches, the average span of a human hand. And a horse’s height is measured from the ground to the top of his withers, the point at the base of the neck. So a fifteen hand horse is 60 inches or five feet tall at the withers.)

Also once read a story where the author, who yes was from Great Britain, described a BLUE cardinal flitting across the trail. Okaaayyy.

Another British pulp writer used to tell the story on himself that in one of his first westerns he described “coyotes circling in the sky.” Now that’s a scary thought, flying coyotes.

Back to horses. Most of us have seen a “croupier mount” in a Western movie, where a cowboy runs up to a horse’s back end, plants his hands on the horse’s rump, and vaults over said rump and into the saddle. I highly doubt any real cowboy ever did that, except maybe when drunk and trying to show off. Trying to mount a horse who isn’t expecting such a move is a surefire way to get a pair of hooves planted squarely in a cowboy’s gut, or even more painfully in his you-know-what’s. Dumb idea. Same way that mount where a cowboy gets his horse running first, grabs the saddle horn, and bounds into the saddle in a running mount. Wrong. Just like in a gunfight, better to take the extra second to be accurate. Mount normally but quickly, so there’s no surprises, and you’re more likely to settle into the saddle and be on your way with no problems. 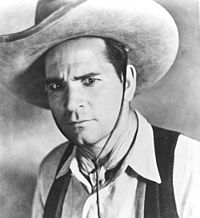 As long as we’re talking about movie horses, I’ll mention Yakima Canutt, who was a working cowboy who became an actor in innumerable early Westerns, then went on to become one of the most famous stuntmen in Hollywood, especially in Westerns.

I have mixed feelings about Mr. Canutt. He did some spectacular stunt work, including the chariot race in the 1959 version of Ben-Hur, in which the horses were so carefully trained none of them were injured. However, on the other hand, he was instrumental in the development of the running W. This was a wire device attached to the front ankles of horses, who would then be forced into a run until they reached the end of the wire, at which point their front feet would be yanked out from under them, leading to a spectacular but usually crippling or fatal fall. Literally thousands of horses were killed by the running W, until 1936. In that year, so many horses were killed in the making of The Charge of the Light Brigade that public uproar led to the banning of the running W. Even then, it took years for Hollywood to accept the watchful eye of the ASPCA to assure fair treatment for animals in films, and even today some filmmakers try to avoid the ASPCA supervision. 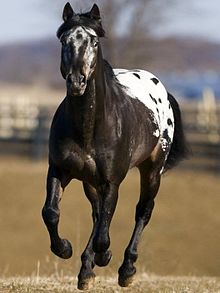 Since I mentioned Appaloosas last time, I’ll talk a bit about them to finish up this week’s chapter. I will admit Appys are not one of my favorite breeds, just like some folks don’t like Paints. To each their own, as they say. Most of the Appys I’ve known have been beautiful, but not the smartest horse in the barn, to say the least.

Appaloosas were, in North America, developed by the Nez Perce Indians, although images of horses with appaloosa-type spotting go back to prehistoric Mongolia. Originally the whites called them palouse horses, probably after the Palouse River. When the Nez Perce were defeated in the Nez Perce War of 1877, they lost most of their horses, and over the next several years the Appaloosa nearly became extinct.

There are three main types of Appaloosas. The first is the leopard, which looks just as the name implies, a white or very light horse with spots over all or most of its body. The second, and most common, is the blanket Appaloosa, which is a horse with a white blanket over its rump, usually with spots throughout the blanket. Third is the snowflake, a dark horse with white spots.

Appys have two common characteristics. One is a very skimpy, thin tail, usually short. This is where the term “rat-tailed palouse” comes from. The other is vertically striped hooves. Most other breeds have solid-colored hooves. Since both the American Paint and Pinto Horse Associations are dead set against crossing Paints and Pintos with Appaloosas (and the same goes for Appaloosa Horse about crossing Appys with Paints or Pintos), a striped hoof almost always immediately disqualifies a horse from being registered with APHA or PtHA.

Time to say adios for now. Next time, I’ll talk Texas Rangers.
Posted by Livia J Washburn at 1:00 AM