The Frontier Editor: Moralist and Antagonist, by Tom Rizzo 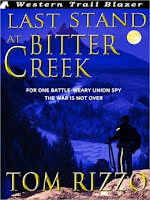 Henry Graham looked up from the conversation with his daughter when three men walked through the door. This trio was trouble—especially hotheaded Milt Ferris—and he felt almost offended by the intrusion. One of the men pulled down the window shade to block the view into the office from the street.

"Hey!" Graham called out, and turned to his daughter and whispered. "Stay back here. If something happens, get out through the back and get Tim." He thought about retrieving a small handgun he kept in the desk drawer, but decided against it.

"I'd prefer keeping the shade up," said Graham, wiping his hands on an ink-stained cloth he kept in his back pocket as he approached the trio.

"No need to get all riled about a little privacy," Ferris said, grinning.

"We run a newspaper, not a confessional. What do you want?"

"Look, we're not lookin' for trouble," Ferris said. "We're here sort of unofficial-like, askin' you to tone down some things you been writin'."

"Lucas send you here?" Graham said, common knowledge this trio worked for him.

"Everybody thinks you're puttin' the town in a bad light." The man's eyelids fluttered rapidly as he spoke.

"No one ever mentioned to me how they feel. I can't imagine Lucas Cameron, or any other business owner, hiring you on as their mouthpiece. None of you strike me as the chamber of commerce types."

--Excerpt from the novel, Last Stand At Bitter Creek.

Frontier newspapers served as strong voices for the communities in which they operated. 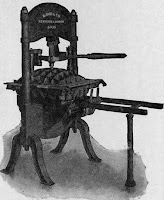 Just before the war, Graham scraped together enough money for a Washington Hand Press. He and his wife filled a wagon with the press, and the rest of their belongings, and journeyed from Colorado Springs into the Dakota Territory. They agreed to put down roots at the first community not served by a newspaper, and launch the Public Opinion.

Their arrival in Bitter Creek coincided with the Union Pacific's recent completion of a railroad depot. The presence of a railroad also helped lure settlers crossing the vast territory west of the Missouri to communities that sprang up along the rail line.

Our fictional Henry Graham, like other frontier newspaper editors, often assumed the role of moral compass for the public. If those who broke, or skirted the law, went unpunished, Graham and his counterparts had no problem admonishing them, even to the point of publishing names and crimes. Public officials, who declined to react to such lawlessness, weren't spared negative publicity either. They often saw their names in print too, including town council members, mayor, sheriff, or judge.

In addition to satisfying an appetite for news - local, national, and world - newspapers also functioned as a resource for advertising and basic information, such as stage and train schedules, announcements of various meetings, church services, names of new residents, and more.

Aside from the morality role, newspapers played a key role in populating the West. In many cases, they functioned as the marketing arm of the community, helping to lure new residents and business enterprises. Editors tried to position their particular community as one of stability and growth, with a demonstrated respect for law and order. 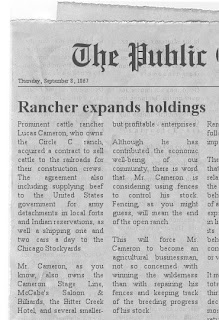 Many editors, however, tried to proceed with caution and sensitivity when it came to allocating space about injustice. Too much focus on criminal activities could possibly discourage potential relocation.

As a result, despite all their preaching about law and order, some didn't hesitate in suggesting vigilanteism in cases where the law was weak to follow through in solving crime.

Operating a newspaper, aside from its moral obligation, was a tough and challenging business. Editors with antiquated presses often fell short of type and printing supplies because of erratic delivery schedules.

Some editors faced competition from rival newspapers operating in the same community. In many cases, the competition deteriorated into a war of words. Neither side was shy about the kind of words they used to characterize each other.

Dee Brown, in discussing the competitive invective between rival editors in his book, Wondrous Times on the Frontier, wrote that the record for the "largest number of derogatory adjectives in a one-paragraph editorial" probably belonged to the editor of the Watonga (Oklahoma) Republican, who attacked the editor of the rival Rustler, on Nov. 29, 1893:

"The ignorant, egotistical, scrawny, miserable, contemptible, disgusting, measly, mangy, depraved, lying, hypocritical, blear-eyed, dough-faced, idiotic, dwarfed, pinched-up, quaking old numbskull of the ex-Rustler ghost still continue to impose himself upon a people who are even more completed disgusted with him than were the Nebraska people who compelled him to make a premature and hasty exit."

Obviously, this editor had no problem expressing himself.

For the most part, editors gave frontier readers what they wanted: entertainment. As a result, truth and accuracy were sometimes at a premium.

Despite the inherent hardships, it's estimated that thousands of newspapers populated the frontier. Some succeeded, and even carry on today. Others didn't last long, closing either because of a lack of financial resources, or lack of courage.

Among the more successful were these newspapers: