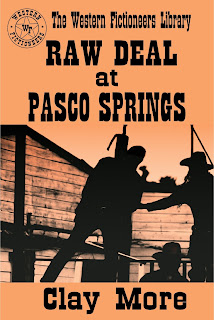 Introducing the Western Fictioneers Library, new editions of some of the best action-packed Western novels by top authors in the genre. The first entry in the line is RAW DEAL AT PASCO SPRINGS by Clay More, originally published by Robert Hale.

Lady Luck smiled down on ex-lawman Tom Mallory when he won the Diamond T ranch in a poker game.  Tom begins to wonder if it was actually bad fortune when he is ambushed and then rides into a gunfight where a hooded man in a long duster coat shoots a man pinned under his horse. Furious at this bushwhacking, Tom takes cards in this deadly game, and soon it starts to look like this gamble is going to be his last hand . . .

CLAY MORE is the pen name of award winning writer Keith Souter, a part time doctor, medical journalist and novelist working in four genres. He lives in England within arrow-shot of a haunted medieval castle and is a member of Western Fictioneers, Western Writers of America, the Crime Writers' Association and International Thriller Writers. He has a lifelong fascination with the Old West, medicine and the paranormal, hence his story 'Snake Oil,' which he wrote specially for Six-guns and Slay Bells: A Creepy Cowboy Christmas. In addition to this, his story, “Boot Hill Neighbors” was in The Traditional West, and he wrote the first two chapters of Western Fictioneers' first collaborative novel Wolf Creek: Bloody Trail. For more information see www.keithsouter.co.uk

RAW DEAL AT PASCO SPRINGS is only the first of many soon-to-be-released traditional Western reprints by members of the Western Fictioneers.

RAW DEAL AT PASCO SPRINGS is just the sort of hardboiled Western novel I really enjoy. It starts with a lynching, but it's clear that this incident is more than simply the dispensing of some rough frontier justice. There's a mystery behind it, and the job of figuring out that mystery eventually falls to gambler Tom Mallory, who's more interested in settling down on the ranch he won in a poker game than he is in untangling a conspiracy and unmasking a murderer.

Tom is a former lawman, though, and those instincts lead him to pin on a badge again after Pasco Springs' sheriff is killed in an ambush, an attack that Tom witnesses. There are plenty of classic elements in this novel – a budding range war, a ruthless cattle baron, a beautiful saloonkeeper, an equally beautiful rancher's widow, and a trio of vicious gunmen – but the smooth, assured prose of veteran author Keith Souter, writing under the pseudonym Clay More, makes them all fresh and entertaining.

Tom Mallory is a fine character, too, a reluctant hero but plenty tough and capable enough to do what has to be done. He's at the center of a very enjoyable traditional Western that has me eager to read more by Keith Souter.