BEHIND THE SCENES by Tom Rizzo

I've always been a fan of behind-the-scenes at the movies . . . wondering what went on when the cameras didn't roll -- or did, for that matter.

Movie trivia has always fascinated me. When family members or friends gather, references to movies are sure to come up whether contemporary films or the ones produced back when.

It's always fun to be in a position of enlightening listeners with a little extra information they may not be aware occurred during the making of a particular film. For our purposes, it makes sense to focus on Westerns--a few of the most popular ones. Granted, many Western movie aficionados may already know about these factoids but, for those who don't, enjoy:

At the time of filming, Gary Cooper, the lead, wasn't in the best of health. He was suffering from a bleeding ulcer, lower back problems, and a recurring hip problem. He was also dealing with issues caused by the breakup of his marriage and an affair turned sour. But it all worked in his favor.

The physical and emotional scars visible on his face gave Cooper the look of someone beyond his 51 years. Because of the deep and defining worry lines, Cooper needed little or no makeup during the filming. 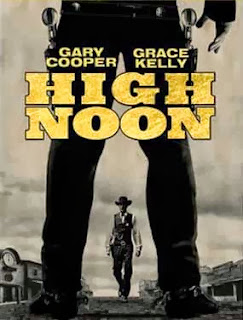 Cooper's professional reputation was on the decline after spending twenty-five years in show business. The Motion Picture Herald even dropped him from its list of top 10 Box Office Performers.

But his performance in High Noon, as Sheriff Will Kane, made him the comeback kid and led to his second Academy Award for Best Actor. (He earned the first one for his role in Sergeant York).

He wasn't producer Stanley Kramer's first choice for the lead. He first offered it to Gregory Peck as well as to Marlon Brando, Montgomery Clift, Kirk Douglas, and Charlton Heston.

High Noon, considered a low budget black and white Western, was made for $750,000, and was nominated for seven Academy Awards, winning four of them: Best Actor in a Leading Role, Best Film Editing, Best Music, Original Song, Best Music, Scoring of a dramatic or Comedy Picture.

The film It's the first non-musical to have a theme song - "Do Not Forsake Me Oh My Darlin'," marketed separately from the motion picture

One of the storefronts in the town of Hadleyville, where the story takes place, carries the name "Boyd's Hardware." Many believe the name referenced actor William Boyd, who played Hopalong Cassidy on television.

Deputy Harvey Pell, played by Lloyd Bridges, originally was slated for Lee Van Cleef. Studio big shots, however, didn't like Cleef's facial appearance, especially his "hooked" nose which they thought made him look like one of the baddies. Cleef did make his film debut in High Noon, but as Jack Colby, one of the Miller gang, and without one word of dialogue.

This movie was made before High Noon, but spent a number of months in editing. Producer George Stevens originally tapped Montgomery Clift for the role of Shane, and William Holden as Joe Starrett. Both actors, however, decided on other projects. At that point, Stevens was given a list of actors under contract to the studio and - within three minutes - selected Alan Ladd, Van Heflin, and Jean Arthur. 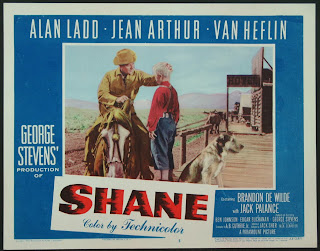 Since Alan Ladd stood only five-feet-six-inches, certain accommodations had to be made when he appeared with other actors.

For example, in scenes with Van Heflin, he appears the same height, but Heflin was considerably taller. Sometimes, you can see Ladd walk up a ramp when he approaches the bar so he can appear the same height as the character standing next to him.

The slick gun twirling seen in the film's showdown moment was performed by Rodd Redwing, who coached many other actors--including, Henry Fonda, Clayton Moore, Glenn Ford, and Ronald Reagan.

In an earlier scene, when Shane is demonstrating his skill for Joey, it is actually Alan Ladd on camera. Ladd had been given a different, easier-to-maneuver revolver. Even with the lighter model, it took 119 takes before Stevens was satisfied.

Director Stevens was passionate about detail, especially in physical props including clothing and building structures. He even checked out the cattle, determined they looked too well-fed, and brought in a number of scrawny cows to take their place.

A moment of levity occurred during the funeral scene. Stevens wanted the dog to look into the grave, but constantly looked away. When the director had the dog's trainer stretch out in the bottom of the grave, the strategy worked. At that point, the coffin - containing rocks - was lowered and the harmonica player began to play "Taps."

The crew, apparently moved by the moment, began to shovel dirt into the grave before realizing the dog's trainer was still at the bottom.

Brandon DeWIlde, who played Little Joey Starrett, died in an auto accident in 1972. Only 30, DeWilde was killed when rushing to the hospital in Denver to visit his wife who had undergone surgery.

At the end of the film, Shane urges Joey to stay away from a life of guns and violence, and then he rides away. The end, if anything, is ambiguous, and the question always arises whether or not Shane survives the wounds he sustained in the gunfight.

The script had kicked around Hollywood for a couple of decades before Clint Eastwood decided to produce and direct it. During those years, Gene Hackman gave it a read and turned down the part of Will Munny. Ironically, Eastwood talked him into playing the role of Little Bill Daggett, and suggested he model the role after Los Angeles Police Chief Daryl Gates. 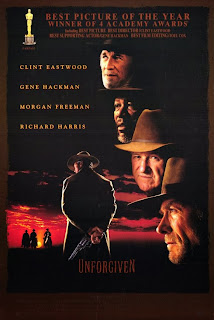 In an interview a few years after the film, Eastwood revealed that Hackman at first balked at agreeing to participate because of his concern about how violence was going to be portrayed, noting the rise in gun violence across the country.

One unknown tidbit, at least to me, was that Clint Eastwood is apparently allergic to horses.

Unforgiven was only the third Western to win Best Picture. The other two were Dances With Wolves and Cimarron.

Although the scored was arranged by Lennie Niehaus, it was Eastwood who wrote the main theme.

Final screen credits read: "Dedicated to Sergio and Don" --references to Sergio Leone and Don Siegal, both mentors of Eastwood.

When Eastwood phoned Richard Harris to offer him the part of English Bob, Harris happened to be watching High Plains Drifter, in which Eastwood starred.

Will Munny's children are named "Will" and "Penny," believed to be a subtle reference to the movie Will Penny, whose plot is similar to Unforgiven.

To assure authenticity on the set, Eastwood banned all modern vehicles.

Lots of trivia and behind-the-scenes anecdotes are in circulation about this movie. Some of the more interesting ones revolve around the actors. 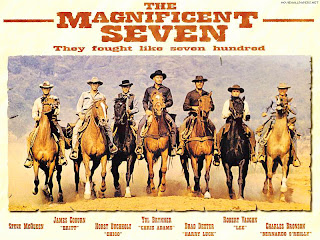 Steve McQueen, who at the time was starring in the TV show, Wanted: Dead or Alive, had a strict contract with Dick Powell's Four Star Productions which allowed no time off to participate in feature films.

But McQueen, driving a rented Cadillac, got into an accident, and into a neck brace. Since he received considerable time to recover, he used it to take part in the original movie.

Popular thinking was that McQueen staged the wreck purposely, figuring that his role in the movie would benefit him far more than his TV program.

Lead actor Yul Brynner wanted McQueen for the role of Vin Tanner, but he ultimately regretted the decision. The two didn't see eye-to-eye much. Brynner, in fact, believed McQueen was always trying to upstage him.

The two stood about the same height: Brynner at 5-10, and McQueen at 5-9 1/2. Brynner tried to create mounds of dirt he could stand on to make himself appear taller. McQueen, however, always managed to casually kick the dirt away before Brynner could assume his position.

Actor Eli Wallach also pointed to instances of McQueen shaking the shotgun shells to call attention to himself, and slipping his hat off to check the sun during the scene in which he and Brynner drove a hearse through town.  When the Seven cross into Mexico, McQueen would lean off his horse and dip his hat in the river.

Wallach, who played Calvara in the film, wrote in his autobiography that McQueen often tried different ways to upstage Brynner, so much so that Brynner hired an assistant to keep detailed records of how often McQueen mimicked Brynner's onscreen gestures.

Wallach, incidentally, admitted in a DVD Documentary about the film that he wasn't used to handling a gun and would always look down when he shoved it back into his holster. He said he didn't want to take a chance of missing the holster and looking foolish.

Although the motion picture made scads of money and achieved a high level of popularity among filmgoers, it earned no acting nominations, but was singled out for Best Score. But the Oscar went to Ernest Gold for Exodus.