Alcohol played a major role in the life of most Western men. They didn't have access to the sorts of entertainment we have today. In larger cities, they might have a theater or music hall, but in most small towns, sources of relaxation were few and simple. Certainly, there would have been social gatherings of many sort, but not every day or even every week. Church was always popular, but only available on certain days of the week. That left the three basic forms of entertainment that mankind has always enjoyed: drinking, gambling, and sex in the form of the town brothel(s). 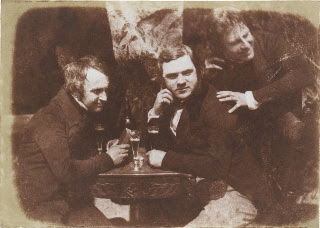 As in the modern era, drinking provided a needed opportunity for socialization and relaxation. Men of that era lived hard lives - many of them worked seven days a week for what we would consider less than minimum wage - and alcohol provided an inexpensive remedy for their stress. They could gather at the saloon with friends, hear the latest news (and probably read an actual newspaper, as many saloon owners kept a variety of papers and magazines for the enjoyment of their patrons), and maybe play a game of chance.

As with anything else that holds such an important position in society, alcohol has generated a great deal of slang. Westerners were a colorful lot in any case, and seldom used one word when several would create a more vivid impression. They invented new euphemisms nearly as quickly as the old ones caught on. One of the most common types of alcohol available in the Old West was whiskey, either corn or rye. We'll start by examining some of the common slang terms for that beverage, and save other alcoholic ramblings for a later column.


A drink of whiskey was known as a base burner, which is a furnace or stove where the fuel is contained in a hopper or chamber, to be fed to the fire as needed. Two drinks of whiskey was a pair of overalls.

Bald-face: this was often used to refer to new whiskey, presumably strong enough to take the hair from your face.

Bark juice: cheap whiskey was often made of nothing more than raw alcohol, burnt sugar, and tobacco; bark was an optimistic term.

Brave-maker or bottled courage: many a man has gotten into trouble because of the false courage provided by alcohol.

Bug juice: frontier whiskey was often made on the premises, and rumor had it that the unscrupulous saloon owner would incorporate into the mix anything handy, or anything that happened to fall into the barrel.

Brigham Young Cocktail: a term used for especially strong whiskey. Brigham Young was the leader of the Latter Day Saints movements (the Mormons). This is a tongue-in-cheek dig at the sect, as devout Mormons do not drink alcohol.

Bust-head: an apt description of either the morning after a drinking binge, or of a fight brought on by the same.

Clinch Mountain: rye whiskey; probably from a folk song called "Rye Whiskey," which begins "Way up on Clinch Mountain, I wandered alone; I'm drunk as a devil and a long way from home." Clinch Mountain is a ridge found in Tennessee and Virginia.

Coffin varnish: even in those days, it was understood that alcohol could be a potent poison if abused.

Cowboy cocktail: a straight shot of whiskey, the traditional "manly" way to drink.

Family disturbance: one can well understood how a man's wife and children felt about him spending all his free time with the bottle.

Forty-rod lightning: a rod was a unit of length; strong whiskey was reputed to have the power to knock one over from such a distance.

Gut-warmer: a shot of whiskey certainly does create a burning sensation in the belly.

Jack of Diamonds: rye whiskey; from a Texas folk song related to the Clinch Mountain song.

Joy juice: people generally feel happy after getting on the outside of a couple of drinks.

Kansas sheep-dip: sheep were held in poor regard by most cattlemen, so this term probably described poor or cheap whiskey. 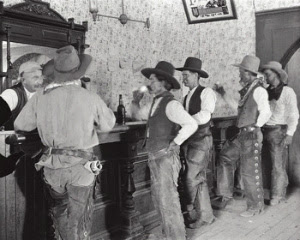 Mormon tea: another dig at the tee-totaling Mormon sect.

Neck oil: so called because of the tendency of the head of a heavy drinker to nod.

Nose paint: an apt description of the resultant red nose of a drinker.

Old Orchard or Old Towse: origins are unclear on these terms, perhaps a common whiskey brand.

Pop-skull: cheap whiskey; you'd certainly feel as if the top of your skull had popped off.

Prairie dew: whiskey was a common as dew, and as refreshing to a dusty cowhand.

Rebel soldier: rye whiskey: many rye whiskey companies are based in the South.

Red disturbance, red ink: descriptive terms for the distinctive color of the drink.

Sagebrush whiskey: presumably made from this ubiquitous desert plant.

Scamper juice: good whiskey certainly put a man in the mood to scamper about.

Sheepherder's delight: cheap whiskey that tasted like sheep-dip must have.

Snake pizen: cheap whiskey that tasted and acted like venom. 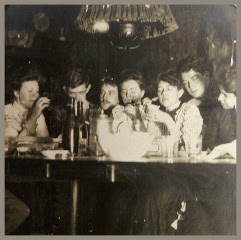 Tarantula juice: either from the ingredients of an unsanitary barrel or the supposed effects of a bite from the spider.

Tongue oil: whiskey is famous for loosening the tongue (and the inhibitions).

Tornado juice: a potent drink could affect a man like the sudden whirlwind, leaving him breathless and dizzy.

Wild mare's milk: potent whiskey had a kick like a wild horse.

White eye: corn whiskey, of a paler color than other types.

A Dictionary of the Old West, Peter Watts, 1987
Everyday Life in the 1800's, Marc McCutcheon, 1993
Legends of America website: http://www.legendsofamerica.com/we-slang.html