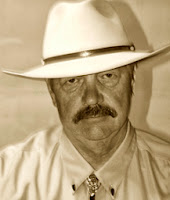 I'm about to finish up a novel called Stryker's Bounty, that is set in Pinal County, Arizona. Thought you might like to know something about the area.

Pinal County was formed February 1, 1875, from parts of Maricopa County and Pima County. The name seems to have come from the Pinal Apaches, or it may have been from the pine groves in the mountains within the county's borders. Pinal County was modified in 1877 to correct a bountary error, and it lost the Globe copper mining district in 1881. Its present area is 3,441,920 acres, just in case you're counting. It includes the Gila River, and part of the San Carlos Indian Reservation. Agricultural land abounds around the county seat of Florence, and the mountains have yielded many rich mining strikes.

Now for some interesting names.

Apache Leap
Legend says a cavalry detachment from Camp Pinal caught seventy-five Indians on the edge of the cliff now called Apache Leap and they jumped to their death rather than surrender. No official records of the incident exist.

Arizola
A man named Thomas from Carthage, Missouri, established the town. He used the first for letters of Arizona and his daughter's name, Ola, to name the town.
This is where the infamous "Baron of Arizona" set up headquarters. His name was Peralta-Reavis, and he claimed "vast holdings." Apparently he ripped the railroads and mines off for millions by getting them to pay for quit claim deeds to property they wanted. The fraud was eventually exposed, but who knows if any of the money was reclaimed?

Casa Grande
In the early days, the Casa Grande ruins were called Casa Montezuma. Some thought the ruins had been occupied by the Nahuatl or Aztecs in their migration from the north into the valley of Mexico. The Pima Indians' legend says the structures were erected by Civano, who was either a chief or a deity of the Pima, which is why they call the ruins House of Civano. Casa Grande was made a national park on March 2, 1889, and a national reservation on June 22, 1892. Finally, on August 3, 1918, it became a national monument of 472 acres extent.

The community of Casa Grande is the closest town to the national monument.

Copperopolis (or Copperosity)
A short-lived copper settlement and mind with an ambitious name. Granted a post office in October 1884 but the P.O. closed in September 1885.

Estrella Mountains
The earliest recorded name for the Sierra Estrella was that given by Fr. Francisco Garces in 1775 when he referred to them as Sierra de San Joseph de Cumars. Cumars means "broad" or "thick" in the Pima language. Why the mountains hould have the name Estrella is not known. The Pima Indians called the small range the Kamatuk, or in its anglicized form, Komatke.

The small Pima village of Komatke is located at the foot of the mountains and the Pima name for it is Kamatuk Wutea (below or at the foot of Kamatuk). The English name of the village is St. Johns because of St. John's Chapel, which is located a half mile to the west.

Government Hill
A government surveying party place a bench mark on this hill. Thereafter cowboys and settlers began speaking of the location as Government Hill.

Grant, Camp (Old)
Because of its location on Arivaipa Creek, this post was called Fort Arivaypa in late 1859 when it was a small garrison. It became a military fort on May 8, 1860, renamed Fort Breakenridge, after the then vice president of the United States. The next year, the fort was abandoned and burned as the troops were withdrawn for service elsewhere during the Civil War.

The post was reestablished in May 1862 and named Fort Stanford for Leland Standford, then governor of California. It was renamed Fort Grant in November 1862, but was later called Camp Grant. Then, a new Camp Grant was established in Graham County, and the Pinal one became known as Old Camp Grant.

The Camp Grant Massacre, in which men from Tucson and its vicinity raided and massacred Arivaipa Apaches who were being held at the post, occurred at Old Camp Grant in 1871. One hundred eighteen Indians were slain.

Manlyville
In 1880, Joseph Chamberlin and his sons established the Willow Spring Ranch in the valley through which Camp Grant Wash runs. Here one of the sons, Manly R. Chamberlin, established a post office, calling it Manlyville, after himself. The mail was carried on a pony which made trips between Tucson and the Riverside Stage Station until a four-horse coach was later substituted and the place made a stage stop.

Needle's Eye
Coolidge Dam was built at the Needle's Eye, a narrow place in the Gila River Canyon.

Oracle
Albert Weldon made the trip to the western part of the United States via the Horn in his uncle's ship, the Oracle. Weldon did assessment work for the Oracle mine around 1880, and built a brush camp where Oracle is today.

The town of Oracle did not begin developing until the Apache Mine began working. Oracle then served as the halfway point between Apache Camp and Tucson. However, the settlement did not have a name. By January 1882, there were about eight dwellings at what was called Summit Spring, or Oracle Camp. Among the early settlers were Mr. and Mrs. Edwin S. Dodge, who started a boarding house at the Arcadia Ranch, so named because their partner, Jack Aldwinkle, was a Nova Scotian. When Dodge applied for a post office, he desired to use the name Arcadia, but this was rejected and the name Oracle was selected in its place, so named for the ship in which young Weldon had come around the Horn.

Rawhide Mountain
A Mexican goat herder on this mountain wore rawhide sandals and lived like a miser. He is reported ot have slept on rawhide.

Sacate
The word sacate is derived from the Nahuatl word designating the type of grass preferred by horses and cattle, as distinguished from sacaton, which consists of weeds, brush, and other herbage not fit for forage. In 1775, Fr. Francisco Carces wrote of the growth of sacate in the area where the Indian village of Sacate is now located.

Superstition Mountains
The Pima Indians have a legend concerning a great flood, the foam of which caused the broad white streak in the limestone extending for several miles along the face of the rough Superstition Mountains. Because of this legend, the Spanish referred to these mountains as the Sierra de la Espuma (mountains of foam). Their current name may be attributed to the stories told by the valley-dwelling Indians that the mountains were bad medicine, since no one who entered them ever returned. This was probably true, because Apaches watched for strangers from the peaks and ambushed any ho dared enter the mountains. The United States Cavalry disproved the legends concerning the disappearance of men. At least two skirmishes with Apaches occurred in the Superstition Mountains from which the military men emerged with few casualties.

Like other mining states, Arizona has its own store of lost mine tales, and that of the Lost Dutchman Mine is one of the best known (c.v. Weaver's Needle).

Weaver's Needle
It is thought, but not proved, that Weaver's Needle is named for scout Pauline Weaver. On the other hand, the rock looks like a needle formerly used by weavers.

Weaver's Needle figures in several legends about the Lost Dutchman Mine in the Superstition Mountains. The needle is said to be a landmark pointing the way to the mine, which has never been found.

The folklore connected with the Lost Dutchman Mine is nearly endless. Typical is the legend concerning a Mexican lover who, while fleeing from his sweetheart's angry father, took refuge in the Superstition Mountains where he found an immense gold deposit. He returned to his home in Mexico and in order to take advantage of the mine before the land became part of the United States through the Gadsden Purchase, the young man led his entire community north to the Superstitions. Every member of the part is said to have loaded himself with gold and then set out for Mexico. Apaches ambushed and killed the entire party, said to have been 400 men, with the exception of two small boys. These children grew to manhood retaining the secret of the mine. With a third partner, they returned to the mine, but had barely begun to dig when a Dutchman with a long white beard appeared. They had the mistake of telling him about the mine, whereupon he murdered the young men. This was in 1870.

In the ensuing years, many people attempted to trail the Dutchman to his mine. None succeeded, and at least eight are reputed to have died at the prospector's hands. He died about 1884 without revealing the secret of his mine, except to one neighbor. The neighbor was unable to follow the directions, and the Lost Dutchman Mine earned its name.