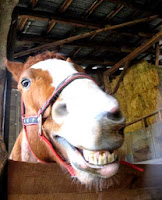 Sure, there are plenty of heroic cowboys – John Wayne, Jimmy Stewart, Clint Eastwood, Robert Duvall, Sam Elliott, Alan Ladd, Tom Mix, Tex Ritter, Clayton More, Lash LaRue, Gene Autry, Roy Rogers, Hopalong Cassidy, Buck Jones… the list goes on and on. But who would dare say that the horses these western heroes rode were mere transportation? They deserve their own post. Those I haven’t named – well, they also deserve a lump or two of sugar for their hard work. 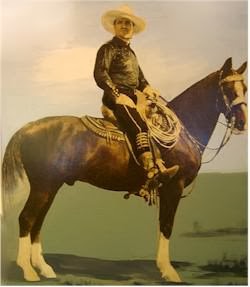 Let’s start with Tom Mix’s famous horse Tony. Born in 1899, Tony had white stocking rear feet and became a celebrity after making his debut with Mix in 1917. They made well over a hundred and fifty films together – Tony even had equal billing! The horse learned a few marvelous tricks without any extensive training; he only needed Mix to show him how to untie the cowboy’s hands, or loosen his own reins, run after trains, open gates, jump a cliff and rescue Mix from a fire. He was the original “Wonder Horse.” Tony planted his hoof prints in front of Grauman’s Chinese Theater next to Mix’s hand prints in 1927. Three films featured his name in the title – Just Tony (1922), Oh! You Tony (1924), and Tony Runs Wild (1926). When the horse was 22, he retired. Tom Mix used Tony Jr. in other films he made, and Tony II when appearing in public. But the original Tony died on the second anniversary of Tom Mix’s tragic death in a car accident. Who knows – maybe they’re together riding the heavenly prairie in the sky right now. 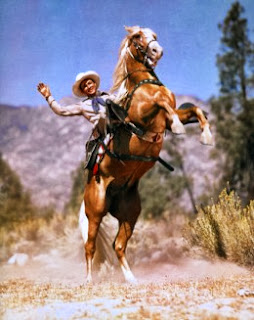 Roy Rogers’ Trigger was the second most famous horse in films. Born in 1932, he was first named Golden Cloud due to his palomino breed. Rogers chose him in 1938 out of several “rented for the movies” horses. He bought the horse later that year and gave him the name Trigger due to his quickness and intelligence. The palomino was able to walk on his hind legs and perform over a hundred trick cues. Trigger also was featured in a Dell comic book series about his adventures. Rogers took the horse up three or four flights of stairs several times to visit the children’s wing at hospitals. Trigger did have a trainer, Glen Randall, and was housebroken – which made it easier for Rogers during public appearances. He once danced, reared up and pawed the air, and played dead at the Hotel Astor’s ballroom for an audience. Trigger planted his hooves in front of Grauman’s beside Roy Rogers’ hands in 1949. To take the strain off performing, Rogers used two other horses, Little Trigger and Trigger, Jr. After Trigger’s death, Roy Rogers had the horse stuffed and mounted. Once the Roy Rogers and Dale Evans’ museum closed, a family-friendly cable network in Omaha, Nebraska bought Trigger for display. 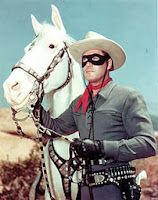 Silver, the Lone Ranger’s white stallion, was one of many Silvers on the big screen. The Lone Ranger radio show was inspired by the Zane Grey book before the character galloped onto film and television. According to a 1938 episode the Lone Ranger first rode Dusty, a chestnut mare. After the Lone Ranger saved Silver from a wild buffalo, the horse chose to pair up with the masked man. Silver starred in two films with Clayton More as well as the television series. And every time the Lone Ranger mounted up at the end of an episode, he would shout, “Hi-Yo, Silver! Away!” Both the Lone Ranger’s horse and Tonto’s horse, Scout, were intelligent and trained – but Silver won the “Patsy” in 1957 – the Award for Excellence given to outstanding animals in television and motion pictures. 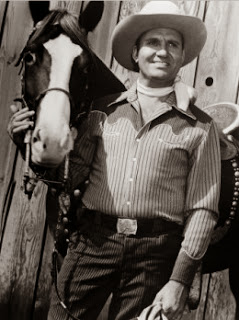 Gene Autry’s Champion also had a radio, film and television career. The sorrel with a blaze and three white stockings first appeared on screen in Melody Trail in 1935. He could jump through paper-covered hoops and gallop and stop on command. Champion died in 1947 during Autry’s military service, so the singing cowboy had to find a second Champion. In 1949, Autry and Champion II left their marks in the famous sidewalk in front of Grauman’s Chinese Theater. He used other unofficial horses, named Little Champ, Lindy Champion, Touring Champion and Champion Three, to serve as movie stunt doubles or public appearances. Autry’s famous horse also starred in his own series, The Adventures of Champion, in 1955 and 1956. Champion also had a comic book series (he couldn’t let Trigger have all the glory!) The third official Champion died in 1991 at 42 years old. But all three Champions starred in almost one hundred films and TV shows.

Buck Jones’ horse, also called Silver, starred with the actor in 50 out of the 73 films for over twenty years, from 1922 until 1942. One silent film, The War Horse, features Silver being drafted into the cavalry – and Buck joins up as well out of loyalty. In France, Buck rides Silver across enemy lines and heroically stops an ambush by German soldiers to save the outfit and win the love of a Red Cross nurse. Perhaps Silver also earned the love of a sweet mare! Unfortunately, Jones’ star as a western cowboy waned by the end of the 1930s. On November 28, 1942, Buck Jones was the guest of honor at a party in Boston’s Cocoanut Grove, the city’s best nightclub. The actor died in a tragic fire, trapped along with 491 other guests celebrating over the Thanksgiving holiday including soldiers and a pair of newlyweds. Silver must have wept out of loyalty. 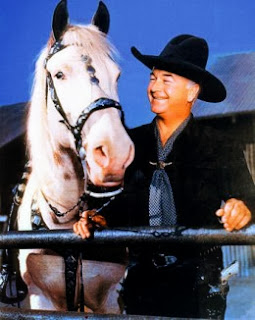 Hopalong Cassidy’s horse, Topper, replaced the actor's original horse after King Nappy was injured during filming in 1939. Topper, named by William Boyd’s fifth wife Grace – who loved the popular films and books – was a white Arabian stallion with black ears. Topper starred in over 60 films with the actor. Boyd wisely bought the rights and ended up making syndication deals along with tie-in products for the new Saturday TV matinee audiences until 1953, when he retired. Since he owned Topper, Boyd interred the horse after death in the Los Angeles Pet Memorial Park, also called Save Our Pets’ History in Eternity (S.O.P.H.I.E.) in Calabasas, California.

Leave a comment about the favorite horse you remember in westerns. This website - http://www.fiftiesweb.com/horses.htm - lists many movie and television stars along with the animals associated with them. And here are a few more great websites to explore: ﻿ http://www.wildwestweb.net/horses.html; http://discovery2020.hubpages.com/hub/Horses-of-Famous-Western-Film-Stars-and-their-Sidekicks; http://thewildwest.org/cowboys/wildwestshowbizcowboys/293-moviecowboyhorses

Meg Mims is an award-winning author with two western mysteries under her Eastern belt. She lives in Michigan, where the hills are like driveway slopes and trees block any type of prairie winds. LIKE her on Facebook, follow her on Twitter or check out her books on her website. Double Crossing won the 2012 Spur Award for Best First Novel and Double or Nothing is the exciting sequel. Her story, "A Savior Is Born," is included in A Wolf Creek Christmas published by Western Fictioneers. 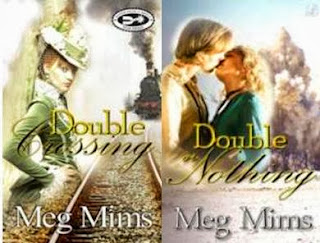