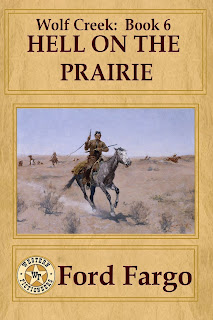 Unlike previous volumes in the series, Wolf Creek Book 6: Hell on the Prairie is not a collaborative novel. Instead, in this collection of short stories, seven members of the posse collectively known as Ford Fargo wrote as themselves. The effect is both cacophonous and musical, as each author’s voice is distinctive when not required to disappear behind the Ford Fargo filter.

Troy D. Smith, Chuck Tyrell, Clay More, Cheryl Pierson, Jerry Guin, and James J. Griffin all write characters who are pillars of Wolf Creek society—though being a pillar of society in Wolf Creek generally indicates a character has earned an extreme lack of hospitality somewhere else. Jacquie Rogers introduces a group of newcomers whose potential to become series regulars seems iffy, mostly because the characters insist they are unwilling to stick around.

Smith’s, Tyrell’s, and More’s stories provide series and character backstory. Marshal Sam Gardner (Smith) reveals a hidden talent. Who suspected the man was an expert at something besides loafing and sardonic wit? Tyrell gives readers a glimpse at cowboy Billy Below’s genesis in a sweeping saga almost too long to be called short. Below has come a long way from the naïve boy who left home under a different name. Doctor Logan Munro’s past may be the most surprising, and More weaves the tale with no little mystery and quite a bit of violence. The psychological games Munro and his adversary play would do a thriller proud.

Pierson’s and Griffin’s stories take familiar characters in new directions. In Derrick McCain’s story, Pierson’s talents as a romance author shine. McCain, tortured by his mixed heritage and obligations to both sides, emerges as a swoon-worthy hero, yet Pierson manages a delicate balance between romantic sentimentality and thorny issues. Griffin drops a bomb on both readers and his character, perennially shirtless livery owner and former Texas Ranger Ben Tolliver. Tolliver may have dropped his alias several books ago, but he didn’t quite shed his past, which bounces into his present in a big way. McCain’s and Tolliver’s new issues not only deepen each man’s character, but also provide intriguing potential fodder for future entries in the Wolf Creek series.

Guin’s and Rogers’ stories stand out because they’re different from the others. Although series regular Deputy Quint Croy is the presumed narrator of his tale, the story really belongs to a relatively minor Wolf Creek character: Negro saloon owner Asa Pepper. The choice seems odd, until one realizes Pepper’s backstory speaks to the character of the town itself. Rogers’ story is even more unusual in the context of the series. Her characters, just passing through on their way to the West Coast, have never been seen before and may never show up again. The story displays Rogers’ signature sarcasm, and the characters are endearing. Surely Wolf Creek could use a team of good mules.

Hell on the Prairie may not be what fans have come to expect from the series, but none of the stories disappoint. More Wolf Creek anthologies would not go amiss.

Kathleen Rice Adams is a Texan, a voracious reader, a professional journalist, and a novelist in training. She received a review copy of Wolf Creek Book 6 from the publisher. Her opinions are her own and are neither endorsed nor necessarily supported by Western Fictioneers or individual members of the organization. Links in the review are for convenience only; they do not produce affiliate revenue.