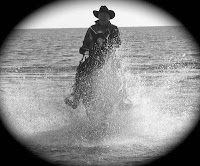 Got to do this fast, because there’s severe thunderstorms about a half hour away rolling in my direction so will probably have to shut my computer down.

When last we left the El Paso Salt War, murder was about to out. On October 10th, Luis Cardis entered the store of E. Schutz and Brother in El Paso. He was sitting with his back to the door when Charles Howard entered, carrying a double-barreled shotgun. A bystander attempted to warn Cardis, who was able to get behind a desk which protected the upper portion of his body. His move was to no avail, as Howard emptied one barrel into Cardis’ lower belly, groin, and legs and as he fell emptied the other barrel into Cardis’ chest, penetrating his heart. Howard calmly left, but realizing discretion would be the better idea took two servants and fled by buggy for Mesilla, New Mexico.

Two days before Cardis was killed, Governor Hubbard asked his adjutant general Steele about sending Rangers to El Paso. Steele told him the nearest Rangers were over five hundred miles away, and it would take a month to get two companies of Rangers to El Paso. Steele also said the Rangers were needed more urgently elsewhere. With Howard gone, nothing much happened until October 24th, at which time Judge A. Blacker wired the governor, from Fort Stockton, that El Paso County was in the hands of a mob which completely controlled the city and county.

On October 24th, Major John B. Jones, famed commander of the Frontier Battalion of the Texas Rangers, left Austin and went to Mesilla, where on November 3rd he met with Howard and his friends, getting only their side of the story. Since Jones was an Anglo, and was meeting only with Anglos, he was hearing all sorts of dire warnings, such as this issued by Sheriff Kerber from Yselta:

“Be on the lookout, Major, these greasers are very treacherous.”

Upon arrival in El Paso, Jones wired the governor that the trouble was indeed serious. He also said: “Think I can control the mob in a few days, in the meantime will organize three months’ minute company.” He later decided to recruit a detachment for Company C, Frontier Battalion, and place it under the command of a local man, John B. Tays, who would have the rank of lieutenant.

For one of the few times in his life and illustrious career, Major John B. Jones, usually a fine judge of character, completely misread a man. His appointment of Tays would lead to disaster.

The lightning and thunder are getting close, so… to be continued in November.