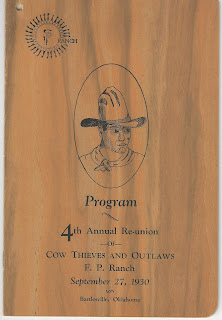 Henry Starr did one thing in his life pretty well, he robbed banks.

The banker that morning in 1906 didn’t know about Starr when the young Cherokee, his hat in hand, approached his desk. “I’d like to hire some money, 'bout five hundred dollars,” Starr said.

The new bank in Bartlesville, I.T. (soon to be the new state of Oklahoma) hadn’t yet been open two months, and the bank officer, L.E. Phillips, was the right hand man and brother to bank owner, Frank Phillips. This handsome young fellow would be their first loan customer.

“What’s your name,” asked the banker.

“Do you have any collateral?”

Henry shifted his feet, and looked sideways. “I ain’t sure. What’s that?”

“It means do you have any property or goods to secure the loan…” L.E. Smiled. “In case you don’t pay it back.”

“Well, I got my horse and saddle…and my Henry rifle.” Starr could tell by the banker’s expression that wouldn’t be enough. “I reckon they’s a couple fellers here in town would stand by me for the money."

Sizing up the young man, L.E. decided he looked like a hard worker. Plus, the references he’d provided were reputable men in the community, so they filled out the papers and L.E. handed Henry the cash money.

Later that day, when brother Frank looked over the day’s transactions, he asked “You gave Henry Starr a loan?”

“Only by reputation,” his brother answered. “He’s robbed several banks.”

The color left L.E.’s face and he grabbed the back of a chair to steady himself.

Frank laughed softly. “Don’t worry,” he said. “I believe he’ll pay it all back.”

And Henry Starr did, on time and with interest.

In his book Oil Man Michael Wallis said this about the Iowa farm boy turned barber turned banker turned oil tycoon: “Frank Phillips [founder of Phillips Petroleum Company] was…a complete contradiction. It had to do with outlaws, real honest-to-goodness desperadoes. When it came to outlaws…the ramrod stiff banker and conservative businessman side of Frank Phillips melted like a cube of sugar in a cup of hot jamoke.”

The community of outlaws in those parts knew it, too, which gained him a certain amount of respect among the local banditti. They even extended to Frank Phillips that part of the brigands’ code about honor among thieves. No one ever robbed his bank, or stole one head of cattle off his ranch. It’s said many outlaws deposited cash money in the Phillips' bank, the source of such lucre being dubious. Most likely, much of it came from unlawful withdrawals from other area banks. Could’ve been Henry Starr borrowed that $500 to outfit an upcoming job. He was a thorough planner. But Frank believed in the frontier version of don’t ask, don’t tell. On the other hand, many owners of said robbed banks made out like bandits themselves by reporting to the insurance examiners two to three times the amounts actually stolen. So it was win-win-win.

Frank Phillips was enamored with the Old West and its ways. He loved outlaws and lawmen and cowboys and Indians and roughnecks and all such people and things. After his oil millions started pouring in he purchased land in the Osage hills of the I.T. putting in cattle and horses and buffalo to roam the 3,600 acres of prairie, hills, and woodlands. It became known as the FP Ranch, and later Woolaroc. He built a rustic lodge overlooking a spring-fed lake. The lodge became his personal retreat, as well as a place to entertain eastern business associates and celebrities he wanted to impress with western lore.

The vast FP Ranch crossed into and butted up against the campgrounds and hide-outs for several local desperadoes like Al Spencer, Frank Nash, and Henry Wells. It’s said on more than one occasion Phillips would ride up to Wells’ cabin to spend a night playing poker with Wells and his group of shady characters.

Phillips even put Wells on his ranch payroll any time he had guests at the lodge, just to add an air of old west authenticity. One time when a group of easterners came to town, eager to experience the flavor of the “real” west, Phillips had a stage coach meet them at the train station to transport them to the ranch. A mile or so from the main gate, Wells and his mounted gang stopped the stage at gun point and robbed the passengers of every wallet, diamond stickpin, and watch fob. One or two of the party figured Phillips had staged the whole thing, but after Wells and his boys pushed some of them around a little, they weren’t rightly sure. When they got to the lodge, all a-bluster, they found their belongings on a table, and Wells and his gang out back drinking beer and laughing.

Phillips had a lot of company picnics and barbeques at the ranch, but he wanted to devise a way to salute all the outlaws and lawmen and cowboys, plus citizens of the Osage Nation where he'd drilled for oil. He headed up the formation of an association for all these tough guys, and in 1927 held the first of an annual gathering called the Cow Thieves and Outlaws Reunion.

About 100 “guests” attended the first Reunion, all by invitation, but in the years to come the guest list and crowd swelled to well over a thousand. Plenty of cow thieves and outlaws attended, but also lawmen, politicians, celebrities and businessmen. It was colorful, to say the least. None were admitted without an invitation; however, Phillips left instructions at the gate to welcome in any American Legion boys in uniform, any cowboy on horseback, and any full-blooded Indians in "costume."

Reunion ground rules were simple: all guns, knives, and grudges had to be checked at the gate. After the festivities, the lawmen had to give the outlaws time to nurse their hang-overs and get a 24 hour head start.

The annual party that was started by “Uncle Frank” Phillips in 1927 continues to this day. It's hard to say how many cow thieves or outlaws show up nowadays as it’s an entertainment and dinner shindig for mainly Woolaroc Museum patrons. And most likely any veterans or regalia-clad Indians or mounted cowboys would still need to lay down the $75 price for a ticket at the gate to gain entrance. More than 900 attended last year, and they have big expectations for this year’s event. No doubt the spirit of Osage Chief Bacon Rind, the outlaw Henry Wells, and  Uncle Frank will be there, too. 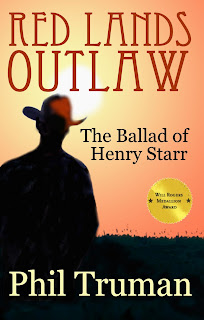 Phil Truman has authored three of what he calls, “Oklahoma-centric” novels.  Red Lands Outlaw, the Ballad of Henry Starr,  a historical novel about the life and times of an Oklahoma outlaw, was a 2013 Peacemaker Award nominee and finalist for the 2013 Will Rogers Medallion for Western Fiction. His novel GAME, an American Novel is a sports inspirational about small town schoolboy football. Legends of Tsalagee weaves a tale of mystery and adventure in a small town. His western short story “Last Will for an Outlaw” appears in LaFrontera Publishing’s anthology, Dead or Alive, released June 2013.