When I was in the fifth grade, I had a huge crush on a girl named Barbara Jo Phillips. She was…well, to tell you the truth, hanging out with my bride of thirty years has eclipsed the faces of my childhood crushes, but I do remember I had one and that Barbra Jo was worthy of it. I thought she liked me as well, but one day I overheard her and her friend, Paula on the swing set talking about boys. I came around the corner just in time to hear Paula ask: “What about Marc?” Barbara Jo turned up her nose and said something like: “He’s way too nice. I like Ryan. He’s a bad boy—wild and dangerous.”

Apart from the soul-crushing realization that Barbara Jo had actually turned up her nose at the very mention of my name, I remember trying to figure out how a fifth grader could be more wild and dangerous. As far as I could tell, Ryan was sort of a jerk, but the only thing that made him any more ‘bad’ than me was that he knew more curse words and smoked pieces of grapevine behind the gym. In any case, Barbara Jo Phillips sensed something I did not. I’m not certain, but it’s possible this was the moment when I subconsciously decided on a career putting bad guys in jail.

I’m betting that when folks from my generation think of a bad guy, Bruce Dern is on their list—or at least his character, Asa Watts—the longhaired no account who shot John Wayne in the back in THE COWBOYS.  Wayne is said to have warned Dern: “America will hate you for this.” Dern replied, “Yeah, but they’ll love me in Berkley.”
Asa Watts was as bad as they come.

You’d think, over twenty-nine years in law enforcement, I would have met a considerable number of Asa Watts personality types. I did have the chance to get to know my fair share of outlaws, but the fact is, I could likely count the really bad ones on both hands…and maybe a toe or two. Even the semi-bad ones are interesting. There is a lot to each outlaw that might be difficult to see at first blush.

I once arrested an outlaw biker who was an incredible pencil artist, rivaling anything I have ever seen. He was also a killer and will have plenty of time to draw. We had a long talk about life and his art when I transported him to federal prison in south central Texas. Had I not been a deputy and he a prisoner, we probably could have had much the same discussion in an art class. I took the long route to the jail with another arrestee because he was a great southern chef and I wanted him to give me his recipe for chicken fried steak. Another fugitive was a fellow Kipling fan. I’ve already written a long essay about misunderstood prostitutes so I won’t go further with that.

I’m always looking for ways to make the bad guys in my stories more real and, at the same time, extra bad. The basically good, philosophical artist who gets wrapped up in something bad makes for an interesting character—but rarely an arch villain for our hero.

Over the years, I did cross paths with some people I would consider truly evil--otherwise rational people who seem to feed on the misery of others.  Though plenty layered, these were still evil, and get the Bruce Dern award for baddies in my book—and literally, in my books.

I worked the Genaro Camacho trial in Dallas early in my Marshals Service career. Camacho was convicted of murdering three people, including a woman and her three-year-old son, who, according to a witness, he marched to a hole in the ground and shot, one after the other, then covered up with kitty litter to hide the stench. There was also testimony about him putting another girl through a wood chipper. An evil dude if I ever looked one in the eye. I remember one of the deputies gave him a breath mint during a break in the trial and I snatched it back from the table before he could eat it. Some people just don’t deserve breath minds. He was executed in 1998.
At the time of Faron Lovelace’s arrest, he looked up at me from where a deputy sheriff and I were smearing his face into the grass and said, “It’s obvious you are more racially pure than I am or you would never have gotten me.” We were in a ditch on the side of the road and he had two handguns, a can of bear spray, a butcher knife and a roll of duct tape, on his way to rob a rich Mexican gun dealer—who we had made up in order to lure Faron out of his mountain stronghold.  He eventually admitted to holding a Jewish couple prisoner in their home in Spokane and the kidnapping and murder of a fellow white supremacist. I spent many hours looking for this guy when he was a fugitive and during the investigations after his arrest.  I have not met many with his disregard for human life. At his trial, he took the stand and said: “I promise to tell the truth as long as it benefits me.”
He was sentence to death but the sentence was commuted to life.

There is a girl on the list.  Frankly, I should probably save her for another post. She deserves much more than a paragraph to describe her evil. As far as I know, she wasn’t a cannibal, but that’s about all the good I can say about her.  Yep, I’ll save her for later when it’s not getting dark outside and I’m not alone in the house…

One of the worst outlaws I ever met was during my first three years with the Marshals. We’ll call him Dean because I think some of his case is still under appeal.  Dean had gone to prison for sexual assault in his late teens. When he got out, a family friend, a man who’d mentored him in junior high, picked him up from prison to make the drive back across country. On the way, Dean decided he needed the man’s car more than the man did and after telling him he heard something wrong in the rear axle, beat this family friend to death on the side of the road with a rock. He did another two decades in prison where he no doubt ruled the roost because of his physical size and pure evil demeanor. When he got out, he convinced some poor woman to marry him, got her pregnant, then when she left him, he kidnapped her and the two-year-old son, threw her in the trunk and took her to Oklahoma where he tortured her in front of the kid for a couple of days before getting bored. As U.S. Marshals, we came onto the picture at this point, after he was a fugitive for this crime.

Dean was one of the few prisoners I ever dealt with who earned a designated shooter in court, that is, someone whose sole job it was to shoot Dean in the head if he broke bad. We explained this to him and he just nodded as if such a warning made all the sense in the world.
On the way to prison, Dean felt we weren’t giving him enough air conditioning in the back seat of our caged Impala. So he beat his head against the side window until the glass broke and he could get some air—A real problem solver who had to be the one in charge.

I’ve said it before, but as a writer, the time I’ve been able to spend with these criminal minds has been invaluable—and I hope some of the reality has seeped into my stories.

As it turns out, Barbara Jo was pretty good at identifying bad boys, even back in the fifth grade. We moved away from that small town, but her family stayed, and she eventually married Ryan. He ended up in jail for beating the snot out of her—a couple of times. Last I heard they were still together. I guess she sees something about his character that eludes me. 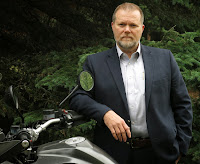 Marc Cameron is a retired Chief Deputy US Marshal and 29-year law enforcement veteran. His short stories have appeared in BOYS’ LIFE Magazine and the Saturday Evening Post. He has published nine novels, six of them Westerns (several as a ghost writer and two under his pen name, Mark Henry).  His present Jericho Quinn series—NATIONAL SECURITy, ACT OF TERROR, STATE OF EMERGENCY and TIME OF ATTACK (February 2014 Kensington) features an adventure motorcyclist, Air Force OSI agent and renaissance man who spends his days sorting out his life and kicking terrorist butt.  Marc lives in Alaska with his beautiful bride and BMW motorcycle.
Visit him at:
www.marccameronbooks.com
http://www.facebook.com/MarcCameronAuthor