MAKE USE OF THE GOLD: DUSTY RICHARDS' WRITING THE WEST BY JEREMY L.C. JONES 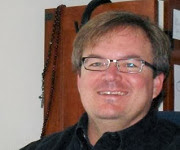 I've never met Dusty Richards. But I feel like I have. I know that's a common feeling for readers and I've read a fair number of Richards' novels. My sense of knowing Mr. Richards--that intimacy beyond the storyteller/audience relationship—comes, though, not so much from his dozens of novels so much as from his “real how-to book”Writing the West with Dusty Richards: A Western Novel Roundup (High Hill Press, 2010).

This "other" relationship, is sort of a cross between the teacher/student and the editor/writer relationship.

Writing the West contains sixteen chapters by Richards followed by five written by friends of his who, as the cover puts it, are "folks who sell the sagebrush scented pages," including John Duncklee , Mike Kearby, John Nesbitt, Jory Sherman, and Jodi Thomas. The book is illustrated with artwork by Michael Andrews.

The first 141 pages from Richards alone would've been enough to satisfy even the most persnickety consumer. The roundup of experts at the end is a drink on the house just because... well, just because. It feels like Richards saying, "I've said my piece, now my friends here are going to pitch in on romance, young adults, mountain men, traditional westerns, and some mistakes you want to avoid. Don't get fidgety, you're in good hands."

As I indicated above, I haven't met Mr. Richards, so I don't know if that's how he talks. I'm merely speaking to the effect. 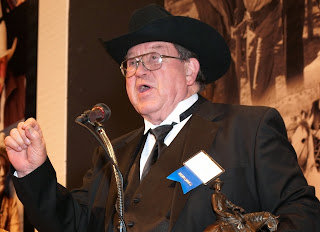 I'm get ahead of myself, though. Let's take a step back and look at Writing the West from the beginning-approach it in the order Mr. Richards intended.

"Between this book's covers is how to write a western novel," he writes in the introduction. "This isn't your usual how-to-write book. You can buy books all day long that will instruct you in writing basics. What I intend to show you are the things I've learned in the process of writing close to one hundred books. These are the little details that make the difference and bring your book to life."

You "may have to read this book two or three times," Mr. Richards warns, and that is the appeal, here—both the need to read and re-read, to dig for those nuggets of gold, to sift for a little color in your pan.

But I don't mean that the way it sounds. You don't have to take a pick axe to the worthless rock and dirt or spend hours crouching by a stream with numb hands, aching back, and high hopes that you'll strike it rich. You will strike it rich. The claim will pay out. It's all valuable. The gold is there--everywhere.

All the reader needs to do is persist, focus, put in the time. And be willing to notice the color, the vein of yellow or the flakes in the top layer of pay dirt. And to make use of it.

"If you want to be a selling writer, that's what you must do," says Richards. "Write and read all the time. Your fingers need to be spilling things on that screen or, if you don't have a computer handy, writing in a log or diary. Carry a notebook and make notes about people, their dialogue, how they look, so you can steal parts of them for your characters."

I'm not sure why I wrote those sentences in here. Not, yet, anyway. Perhaps, they illustrate and reinforce Mr. Richards’ belief in the seemingly little things and the fact that you need to be aware. Watch. Sift. Notice. Read. Write. Steal from life for your writing. Be ready to see the value of the world around you.

Reading through my now ragged copy of Writing the West, I’m struck by how much of my own ink is splattered all over the pages. I’ve underline and made notes, gone away, and returned to do more of the same.

Of all the chapters in all the writing books I own, Chapter Four of Writing the West just might be the one I've returned to the most often since the book came out. "Novels Must Take a Path or Tack" seems like a straightforward enough title and, indeed, the chapter's discussion of "laying out your book" is just shy of overly simplified. 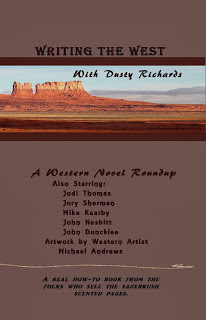 And that's exactly where it should be: just shy of. It teeters on the edge. Perfectly balanced. Glorious.

"A book comes in four sections," says Mr. Richards, "so quarter your book as you write it."

This idea--a novel as having four sections--isn't revolutionary unless you've never heard of it before.

The four sections of a book are, according to Mr. Richards: "Your main POV character is LOST", "Your hero is an ORPHAN", "He becomes an emerging HERO", and "He becomes a HERO/MARTYR". He explains what he means, but I’ll leave a little to your imagination and also not spoil the fun when you get your own copy and flip straight to Chapter Four and Mr. Richards’ Four Quarters plotting strategy.

Yep. You can say that again.

"A simple guide," Mr. Richards reiterates, "without much restraint, yet it makes a book flow."

Exactly how I like it. Structure without restraint. Guidelines without shackles. A nice room with windows and a view.

And a book that flows.

Because when the book flows, the writer finishes it and the reader reads it, and gold surfaces.

I don't know Mr. Richards, but I am pretty sure that he was thinking of me--a guy with a whole lot of technical training in creative writing, but an inability to contain all those ideas into a coherent novel--when he wrote Chapter Four. 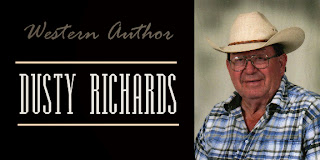 I just know he was thinking of me and folks just like me.

A moment ago, I cracked open Writing the West and noted the first underlined passage that caught my eye.

"High notes, then low notes," says Mr. Richards. "But I would find one thing that could be used to further the story line and use it."

Find something that furthers the story line and use it. Sounds like a good plan, Mr. Richards.