Writing about Indians When You're Not One: Property

In this installment of our series about the cultural differences that non-indigenous writers should be aware of when writing about American Indians, we're going to discuss attitudes toward property.

Perhaps you have heard these things said about Indians: A) They had no sense of personal property. B) They had no concept of owning the land.

How true are those statements? Well, the answers are complex... but North American tribes definitely had outlooks about property and ownership that were far different from the European approach.

First off, you can't really say Indians did not have personal property. Let's say you were an Indian man (from any tribe, really)... and you had made your own tools and weapons. Well, those are yours, and you would definitely not appreciate someone just wandering into your domicile and taking them. On the other hand, you might not be as attached to them as most Europeans were to their own goods, and you might feel an obligation -and in some instances social pressure -to give them away pretty easily.

Owning the land? That's different. Traditional indigenous cultures did not recognize human ownership of land, or the lives of the animals on it. They did recognize the right to use that land, or those animals -although often more in a communal context than an individual one (the technical Western word for that, by the way, is usufruct rights.)

Certain regions might be claimed by some tribes as their hunting grounds. This didn't mean they owned the land or animals, but that their tribe claimed the right to use them- often more than one tribe made such claims. Sometimes that worked out okay, sometimes it didn't. So far as the animals were concerned, if you killed one you conducted a ritual in which you thanked either the animal itself or the spirit (or manitou, in Algonquian tribes) that represented that species for granting you the gift of its life, and it was expected you would use that gift respectfully. If you did not, or were ungrateful, you risked the spirit's wrath on you or, since there was a sense of communal responsibility, on your village or tribe. You did not assume you had an innate, divine right to take those lives because you somehow owned the creatures themselves. 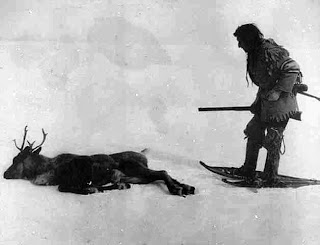 Let us now assume you were a member of a tribe that practiced agriculture (which most did.) Your village would have the right to use a certain area, and usually each family had a portion of their own to work. Another portion was set aside as a common garden, which belonged to the whole village. Needy people would often be fed from that section.

Among some tribes, everything was common. The Cherokees would distribute the grain to all the families in a village each corn harvest, each according to what it was expected they would need to get through the winter -and the rest was burned as a sacrifice. No one accumulated anything, and there was no concept of profit. If the winter was worse than anyone expected, everyone would suffer together.

Sitting Bull (who was Hunkpapa Lakota Sioux), after the famous Indian victory at the Little Bighorn, worked for awhile in Buffalo Bill's traveling Wild West Show. As a member of the troupe he traveled widely, and one thing flabbergasted him in the large eastern cities, especially New York. He saw something there he had never encountered before. 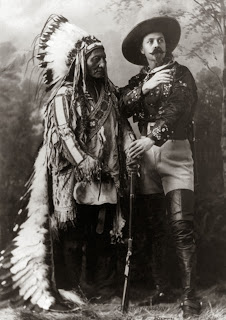 There were children who were hungry and had no homes. At the same time, there were rich people.

This would not have been possible in his own culture. Anyone in need would be provided for out of the common stores. The whole village would prosper as one, or the whole village would suffer as one; some people having an abundance while others starved was unthinkable. Sitting Bull was known to take the money he received as wages for his performance in the show and pass it out indiscriminately to the street children.

As I mentioned in our last installment, about leadership, prestige was gained -not by how much you accumulated -but by how much you gave away. Warriors would take great risk to capture enemy horses or other goods -then often pass them out as gifts when they returned to the village, gaining social stature for doing so. Even as Cherokees had their Green Corn Ceremony, tribes in the Pacific Northwest had a ritual they called the potlatch. A potlatch was given -sometimes to commemorate a special occasion, sometimes not -in which a feast was thrown, and at the end the hosts gave away all or most of their belongings. There, too, there was social stature to be gained in doing so. 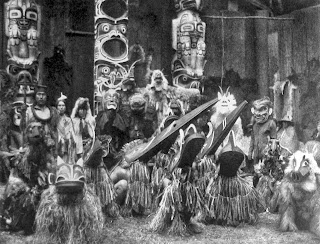 "As for riches they have none, nor covet any; and while they have plenty of provisions, they allow none to suffer through want; if they are successful in hunting, all their unfortunate or distressed friends share with them the common blessings of life."

Early on, these differing approaches caused misunderstandings between Indians and settlers. The Puritans, for example, introduced domestic animals to New England, in the form of cattle and swine. It was not the custom at that time to build an enclosure for your stock, they were allowed to roam free -the wise Puritan built a fence around his garden, to keep the animals out. The wandering animals trampled down or ate the Indians' crops -which they did not appreciate, and caused much friction. On the other hand, Indians were prone to kill the roaming creatures and eat them. 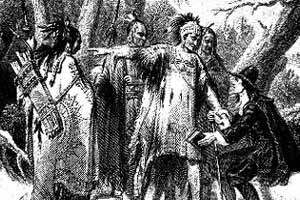 Let's say you're a Wampanoag Indian, traveling through the forest, and you encounter a pig or a cow. A white settler in that context might ask "Gee, I wonder who this beast belongs to." A Wampanoag would think: "these woods are my people's hunting ground, and look, here is a four-legged creature. Let's eat it -clearly we have the right to do so." But to the settler, that Indian has become a poacher and a thief. 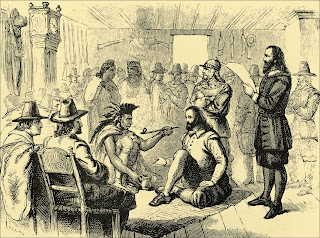 Of course, the trade opportunities presented by Europeans caused a lot of change. Here come these new folks, and they have lots of things that you value: steel tomahawks, steel sewing needles, guns, coffee, sugar, colored beads that were worthless to the Europeans but for your purposes far superior than colored shells for use in decoration or spiritual ceremonies. There had always been trade among Indians, in fact there were extensive trade routes centuries before Europeans arrived. But never had there been such unique trade items, that an Indian could not make himself. They started off as luxuries, but -as luxuries are wont to do -soon became necessities. The Europeans want furs? we'll give them furs (deer were hunted almost to extinction in the American South, mostly by Indians, by 1800.) They want captives they can use for slaves on their plantations? Our limited warfare has always produced a handful of captives- let's make war on each other continually, to get ever more captives to trade (this led to great social disruption, and the bloody Westo and Yamassee wars of the late 1600s / early 1700s.)

From the George Washington administration onward, Americans tried to "civilize" the Indians. One way to do this was to break them from their tribal, communal, shared ownership ideas and teach them to be individuals, and to compete with each other. In fact, Thomas Jefferson proposed that Indians' land could be acquired without bloodshed if the U.S. government established trading posts among them, and introduced them to credit. They would soon find themselves overextended, the government could call the credit in, and the Indians would have no choice but to sell their lands as payment. His plan can be found HERE in a letter to then-military-governor of Indiana William Henry Harrison. 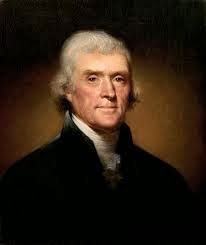 In the late 19th century the "Americanization" process was sought through implementation of the Dawes Act, or allotment. Tribes were discorporated, as was their communal ownership of land; instead, each individual family was given a plot of land to work on their own like good ol' American yeoman farmers. This had two immediate effects: 1) there would always be a whole lot of land left over, which would previously have belonged to the tribe in common, but which the government now took and redistributed to settlers, and 2) since Indians now had individual ownership, white people could buy those claims from them if the Indians were financially hard-pressed (which they were), which would not have been possible when the whole tribe controlled the land. This resulted in even more Indian land passing out of Indian hands. There were also unanticipated social effects, such as a breakdown in community (Indians were not loners, and had always tended to live in large groups; breaking the land up into individual, far-flung farms made each family a lonely island) and in gender roles (the government viewed each family's "head of house" to be the husband/father, even in tribes where traditionally it was women who controlled agriculture.) 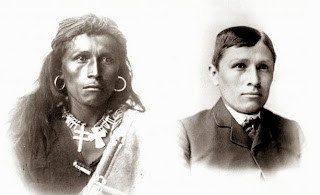 We'll actually go into that in more detail next time, when our topic will be "Gender."