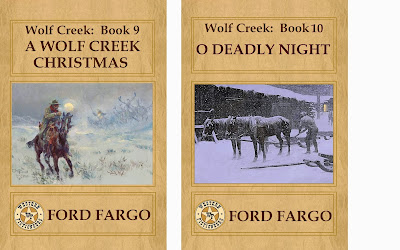 Several months ago, we decided to do a special Christmas anthology of Wolf Creek stories, with all the tales taking place in the Christmas season of 1871. I encouraged new folks to join our writing team, with these short stories an ideal way to introduce a new character to our town.

And boy did Western Fictioneers respond.

Both of which are available now.

Here is a rundown of the stories and authors:

"The Last Free Trapper" by Jory Sherman. Mountain man Roman Hatchett has spent decades int he Rockies,but has finally admitted to himself the beaver aren't coming back. He comes south to Wolf Creek, where his long-ago partner Casto Haston is running a tannery, to try out the buffalo hunting trade. But Roman's past has tracked him to the Plains, and he will have to face it down...

"A Savior Is Born" by Meg Mims. Phoebe Wright, fearless reformer, hits Wolf Creek in search of her sister. Phoebe Wright is always right -and will allow no one to intimidate her. Not even Ira Breedlove, owner of the Wolf's Den Saloon and controller of much of the town's vice.

"That Time of Year" by Jerry Guin. Deputy Marshal Quint Croy is a straight-forward young man, dedicated to preserving the peace. In the days before Christmas, however, he finds himself caught up in a dispute between several of the toughest people in town. Including his own boss. Can he kindle their Christmas cheer?

"'Twas the Fight Before Christmas" by Jacquie Rogers. Gib Norwood owns a large dairy operation outside town, along with his brothers Peter and Paul (whom his late father conceived with a slave, Glory, who also lives with them.) Christmas finds them in a dispute with the troublesome ranch hands of cattle baron Andrew Rogers -a dispute that involves a wagonload of prostitutes from Abby Potter's School for Wayward Girls, including Miss Abby herself.

"A Kiowa Christmas Gift" by Troy D. Smith. Cavalry Captain Tom Dent and Seminole scout Charley Blackfeather find themselves conducting an important parley with Kiowa leaders on Christmas Eve. Dent hopes they can finish negotiations so he can be with his family on Christmas; Charley fears that, if antagonistic warrior Stone Knife has his way, they won't get home at all.

"Renewal of Faith" by Jim Griffin. Texas-Ranger-turned-livery-owner Ben Tolliver and his son Danny get a very unexpected Christmas gift. Then they meet and befriend the new Catholic priest who has come to establish a mission at Wolf Creek, in time to perform Christmas Mass- but Ben finds much of the town opposed to the father's presence. Ben is determined that the Mass will be held, if he has to fight a mob to see it done...

"Sarah's Christmas Miracle" by Big Jim Williams. Farmer Hutch Higgins -haunted by his own Civil War secrets, like many in Wolf Creek -must brave a snowstorm to find help for his sick little girl.

"Irish Christmas at Wolf Creek" by Charlie Steel. Kelly O'Brian has been a railroad worker and a buffalo hunter -now he has his heart set on becoming a rancher. His plans are interrupted, though, when he is kidnapped by a a cruel gang who intends to use him, and their other prisoners, for forced labor.

"A Home for Christmas" by Cheryl Pierson. Derrick McCain's sister Kathleen has not recovered from her experience at the hands of the Danby Gang -and her judgmental husband, Reverend Dill Hyder, cannot accept what he now considers an "impure woman." Then someone from her family's past shows up, and everything changes...

"The Angel Tree" by Chuck Tyrell. The soiled dove known as Brandy has previously only shown up as the object of cowboy Billy Below's desire. She takes center stage in this story, though... when she learns that the innocent children of the prostitutes at Cribtown are barred from attending school by the town fathers because they are "undesirable," and sets out to do something about it.

"The Spirit of Hogmanay" by Clay More. Doc Logan's road to Hogmanay -the Scottish New Year's Eve celebration -is littered with good intentions. And injuries and diseases galore. And to top it all off, someone has stolen his good Scotch...

"O Deadly Night" by Troy D. Smith. Marshal Sam Gardner learns that, for a lawman in a town like Wolf Creek, there is no such thing as a night off. Even on Christmas.


Both volumes out now for kindle, due soon at smashwords, b&n, createspace, and etc.