This month in the Old West
by Jacquie Rogers


By November, the weather makes a decided turn for the worse in the northern climes.  We prepare for winter now, but in the Old West, they had a lot more to do.  Besides that, there was the ongoing fight for the land — new settlers considered the land free for the taking, and the existing population was a might perturbed by the invasion.

All articles cited are from The Owyhee Avalanche, which is still in business and publishing in Homedale, Idaho.


November 10, 1866
INDIANS IN FLINT. Last Saturday night two horses were stolen from a ranch in Flint District, and some other devilmint transacted, the character of which we are not informed. For pure cussedness, these red men are unrivaled. They come into the Owyhee settlements occasionally and, when there is a dearth of horse-flesh for stealing purposes, they break up agricultural implements, slosh round and fix things that as A. Ward would say. O, the gentle cues so to speak.

Silver City and surrounding boomtowns were, of course, in the mountains.  The toll road, privately owned and only route to the area, was rugged in good weather, and nigh to impassable when the rain and snow entered the equation.  (Still that way, although now a public road.)


November 10, 1866
ROADS. Teamsters landing goods in Owyhee have more trouble in getting here after having apparently a arrived at their destination, then they had all the balance of the trip. When persons here of their freight on Reynolds Creek or in Jordan Valley, seven or eight miles distant, they anticipate its reception in a day or two at far best, but in nearly every case teams seem to be a week to days in a accomplishing the feat. The road to Jordan Valley or more particularly the part between Boonville and Wagontown, has been a source of great deal A to the heavy teams coming from California. The heavy rain last Sunday rendered the grade, which is too narrow most every where, and gives great trouble to teams and passing, dangerous and the extreme. Major Biggs had trouble enough for a dozen of man, his wagons being large and very heavily loaded came pretty near never making that few miles. Skinner & Co. should endeavor to have the road improved by early spring, though the road as it is has been a great blessing to the people. The travel over in it next year will amply justified the proprietors for further improvements.

The Owyhee Avalanche had been established in Ruby City, then moved to Silver City when residents of Ruby got tired of the yearly flood. The newspaper was only a couple years old when the original owner sold out. But those years were hard-scrabble, and I'm sure the editors deserved a fine vacation on their way to new adventures.  The new editor sent them off with a fine piece of purple prose.

November 9, 1867
JNO. & JOS. WASSON, former into tears and proprietors of the Avalanche, departed this week from this vale of tears. They are "God's own men," and with but few exceptions take with them the best wishes of our whole community. They established the first newspaper in all why he, and carried it on for two years; in doing so they did more than anyone else for the prosperity and development of our mines. John left here on the morning of the sixth, and goes of the Columbia River route to 'Frisco. He will visit the Puget Sound country on his way thither. He is now special correspondent for the New York Tribune and Alta California, in whose columns he has acquired a distinguished reputation as a spicy and elegant writer.
Joseph Wasson has been out all summer with Gen. Crook, and in his letters to the Avalanche has given an interesting account of the Campaign. He is a practical printer and writer of more than average ability. He left here this morning on the Humboldt Stage for San Francisco. The brothers will meet at the metropolis of the Pacific, compare notes, and enjoy a city life after a four years' sojourn in the mountains. They will write to the Avalanche occasionally. Now we must say: "Farewell, a word that must be and hath been, a word that makes as linger, yet farewell."

I included a piece about roller skating before, but their enthusiasm for the new pastime was so great, I just had to show you another article.  I've searched the archives and maps, but can't find the actual location of the skating rink.


November 25, 1871
ROLLER SKATING. The gayest amusement, to which our people have yet been treated, is McKay's Roller Skating Rink now in operation at Jones & Bonney's Hall. For particulars as to time, &c., see advertisement in another column. Although the rink has only been running about a week, it is quite extensively patronized and already there are many quite proficient in the art. Besides being one of the most innocent of pastimes, it is exhilarating, healthful and pleasant in the highest degree. Our word for it, go to the rink annual have a jolly time. Old and young, parents and children, lads and lassies—and in fact everybody goes.

And a bit of tongue-in-cheek was always welcome.


November 25, 1871
JEFFERSON'S TEN RULES. A friend of sends us "Jefferson's Ten Rules," which he says cannot be too often published. He has ridden them down from memory, and it seems to us that he has got them quite right:
1. Never do to-day what you can put off till tomorrow.
2. Never do yourself what you can get any one else to do for you.
3. Never spend ready money when you can get credit.
4. Always buy anything that is cheap. If you don't want it now, you may by and by.
5. If you only have proper pride you can endure hunger, thirst and cold.
6. We seldom repent having eaten all really good dinner.
7. A man should not be too willing to put himself to trouble.
8. It is better to be troubled about imaginary evils then real ones.
9. When angry, pitch in at once.

NOTE: only nine of the 10 rules were printed.


On a more serious note, where there's gold and silver, there'll also be competition for who gets it, whether the ore is still in the ground or out of it.  And so it happened amongst greedy men in 1872 when The Owyhee Avalanche reported this incident.

November 23, 1872
A MINE JUMPED. Yesterday morning, or sometime during the previous night, Col. Fogus took possession of the Illinois Central mine which has been worked by the Sands Brothers and H. S. Cheasbro for nearly two years past. They had not been working at night but went to the mine as usual in the morning and found Fogus and some other parties on guard with Henry rifles. We know nothing in relation to the title to the mine. Fogus may have a just claim to it, and he may not, but we cannot, nor shall we countenance any such high-handed proceedings. If his claim is right and just, he should have sought redress in our law courts, instead of taking forcible and armed possession of the mine. In this matter the general sentiment of the community is against Fogus and the quicker he leaves the Illinois mine, the better in it will be for him.


Later, Col. Fogus arrived at the Idaho Hotel, at two o'clock this morning, and has probably given up the idea of holding the mine.

Even with all the mine jumping about, Silverites still loved their entertainment.  I included some of these tricks in my book, Sleight of Heart, in which the hero is a thoroughbred gambler and sleight-of-hand artist. 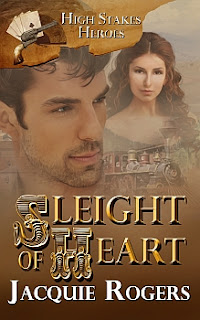 November 23, 1872
CARL BOSCO. This world-renowned sleight-of-hand performer and illusionist gave one of his wonderful entertainments in Good Templar Hall last night. The Hall was crowded, and everybody present was immensely delighted. Among other incomprehensible tricks performed were the following: The Enchanted Cards; Candles and Handkerchief; Wreath and Rings; Coin and Decanter; Aerial Bell and Frame; Mystic Clock; Demon Hat; or how is that for high? Floating Stick; Mysterious Water; The Hindoo Chain; Lessons in Legerdemain; Mystic Ball; Turkish Handkerchief; Treasures in the Air. Mr. Bosco will give another performance at the same place of this evening and we advise everybody to attend, as it is decidedly the best "show" that Silver City has ever had.


November in the Old West 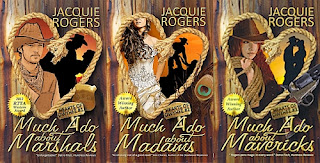 Posted by Jacquie Rogers at 5:10 PM