I'm taking a slight departure the next couple months from my usual posts; a swing into something just for fun, sumpin easy-going heading into the holidays; hoping for a few smiles, maybe a chuckle or two. Figure we all could use a little of that.

Thought I'd share some vignettes from the life of White Oxley, a minor character in two of my novels. In this post, because the topic deals with a chicken, not a turkey, we'll say it has a pre-Thanksgiving flavor, so to speak.

Let me tell you a little about White. He's country AND western, laying claim to both titles as a farmer and small-time rancher, and by virtue of having lived his entire 68 years in Oklahoma. For the past fifty years, he has owned and worked a few acres of land near the small town of Tsalagee where he grows mainly soybeans and corn, and runs a few head of cattle. And, of course, he has the requisite yard of chickens.

White doesn't have much formal education, but does own an innate, resident wisdom born from a lifetime of hard work, hard times, and life experiences both sublime and tragic. Like all of us, White struggles with life and all its confounding vagaries, but the best thing about him is that he never takes himself too seriously.

I've always liked White, maybe because I see a little more of myself in him than I care to admit, excluding the wise part. Here's one of his stories:

White Oxley had purchased the rooster at a discount.

"Well, there is one I can let go for half price," the chicken fella said. 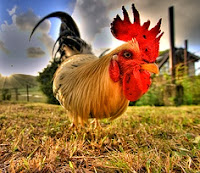 He'd made the trip to the Siloam Springs hatchery to find a replacement for his main rooster who'd fallen victim to a coyote. White hadn't been surprised after it happened. The old boy was past ten and apparently didn't see very well. He'd guessed the cock mistook the coyote for one of his dogs. Most likely Stumpy, who had somewhat of a coyote appearance, and liked to wander around the chicken yard looking for misplaced or un-attended eggs.

Unfortunately, King George–that was the departed rooster's name–had come to tolerate Stumpy, probably because his repeated floggings of the dog didn't seem to deter the mutt's trespassing; and with the rooster's advancing years, apparently keeping up the chicken yard marshaling came to be more trouble than it was worth.

Funny, though, that old George couldn't tell the difference between a coyote and Stumpy, as the dog had only three and a half legs, and moved about with a pronounced hop. On the other hand, chickens weren't known for their intelligence.

There was a young cockerel in White's flock, but he wasn't quite up to speed for taking on the responsibilities of Head Rooster, hence White made the buying trip to Arkansas. 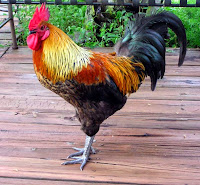 Oxley eyed the chicken man suspiciously. He'd told him coming in he didn't want no dang high dollar rooster, and had turned down the first two prospects. "Why half price?" White asked.

The fowl in question didn't look like a half-price rooster. He sported a high comb and long bright red wattles. Head and neck feathers shined a reddish-golden; his body and leg feathers glinted in mottled blue and rust and green; those off his back flowed from burgundy to red to orange; his tail feathers sprung high in black and blue-green arches. He was sure enough a handsome bird, and seemed to know it; strutting about the large cage, his head high, his beak slightly opened, his red eyes wide and fierce.

"He ain't much of a crower," the chicken seller said. "Sounds sorta like a tornado siren with laryngitis."

White nodded. "What else?" he asked.

The man sighed and crossed his arms on his chest trying to decide the best way to say it. "There's some signs that this feller ain't very aggressive, you know, with the ladies."

"I mean he has a tendency to get henpecked." 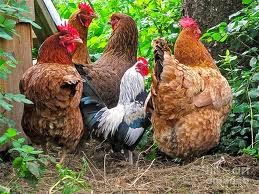 White took off his crumpled straw hat and scratched the top of his head. He studied the rooster in silence. "Well…" he said presently. "For the price I reckon I can live with that."

"Great!" the man said. "I'll go write him up." And hurried off toward his office.

After the fella got out of earshot, White turned to the caged rooster and muttered, "Henpecked, huh? Guess I know how that feels."

Back at the farm, White was about to release the new rooster into the chicken yard when his grandson came running up. The boy was smart like his momma and ornery like his gramp. That made him White's favorite.

"Hey, Gramp," the boy said excitedly. "Who's this?" He jumped up onto the pickup's lowered tailgate peering into the cage.

"Ain't give him a name yet. Thought you might have one."

"You know, the boxer," White answered. The boy gave his gramp a puzzled look. "Before your time, I guess," said White.

"No, I meant like the chicken brand mom buys at the store."

White grinned and nodded. "Seems about right." He opened the cage door and prodded the rooster out. "Welcome to your new harem, Tyson."

The rooster alit with some squawking, gathered himself, ruffled his feathers out some, did a little preening, then looked about. The group of hens gathered across the yard looking back at Tyson, muttering amongst themselves. The rooster raised his head high, puffed out his breast and strutted toward them.

A fat old hen, white with brown neck feathers who they called Maybelline, walked out from the group and stopped in front of Tyson, cocking her head left, then right. The rooster threw back his head to crow, but only a scratchy screech came out. He stuck out his left wing, lowered his head and started waltzing in a circle in front of the hen, then put the right wing out and circled back, describing a figure eight. The big hen watched him for several seconds clucking a few comments during the dance. In the middle of Tyson's third circuit, Maybelline walked over and pecked him soundly on top of his head. Tyson squawked moving back a step or two, then turned and fled to a far corner of the yard, flapping atop a fence post.

"How much you pay for that rooster, Gramp?" the boy asked.

At Sunday dinner the next day , White would reflect that, though tasty, Tyson was the most expensive fried chicken he'd ever et, even at half price. 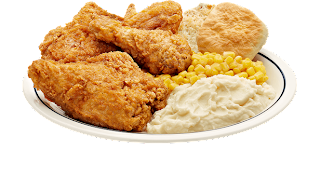 You can read more about White Oxley in Phil's novel Legends of Tsalagee. He has authored three of what he calls, “Oklahoma-centric” novels.  Red Lands Outlaw, the Ballad of Henry Starr,  a historical western about the life and times of an Oklahoma outlaw, was a 2013 Peacemaker Award nominee and finalist for the 2013 Will Rogers Medallion for Western Fiction. His novel GAME, an American Novel is a sports inspirational about small town schoolboy football. Legends of Tsalagee weaves a tale of mystery and adventure in a small town. His western short story “Last Will for an Outlaw” appears in LaFrontera Publishing’s anthology, Dead or Alive, released June 2013.