This month our focus is on Steve Englehart, a name very familiar to comics fans. In the 1970s he had a four-year run as scripter of The Avengers, creating some of their most memorable storylines, and several other Marvel titles as well, including a very well-regarded run on Doctor Strange and co-creating (with Jim Starlin) the character of Shang-Chi, Master of Kung Fu. Later in that decade, teamed with artist Marshall Rogers, he had an acclaimed run on DC's Batman in Detective Comics, returning the title to some of the sensibilities of the 1930s/early 1940s: a darker, more brooding hero, and a Joker who was once more the homicidal maniac he was introduced to be before descending into camp. In the 1980s Englehart introduced Coyote, a Native American-themed hero. In more recent years he has worked as a novelist, writing the Max August Magikal Thrillers (The Long Man, The Point Man, The Plain Man, and The Arena Man.) 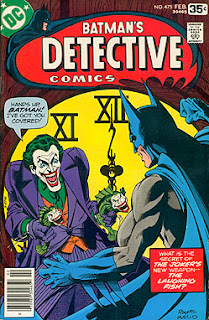 Along the way he has penned his share of western heroes.

Steve Englehart has graciously agreed to answer some questions for us:


Were you a fan of westerns when you were growing up? What about western comics?

When I was growing up, Westerns were a staple on TV and in movies, so they were part of everyday life. I liked them fine, watched a lot of them, but I was not fixated on them, so I didn't search out Western comics.

One of your first scripts at Marvel was uncredited, in an issue of Two-Gun Kid. Can you tell us about that?

Not much. I haven't thought about in a very long time. As I recall, Ogden Whitney both drew and wrote the issue, but editor-in-chief Roy Thomas wasn't satisfied with the writing and asked me to massage it. 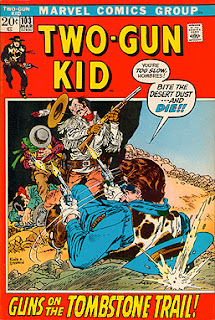 You’ve said that the Ringo Kid was your favorite of Marvel’s “true cowboy” heroes –why is that?

He had one of the most interesting back stories, along with the Black Rider. The others were all pretty generic. And Ringo's story was told in the 50s, at a high point for Western comics, with art by Joe Maneely. He hadn't been revived in the 60s, when Marvel's emphasis was on superheroes. So getting to revive him sent me straight to the 50s stuff. 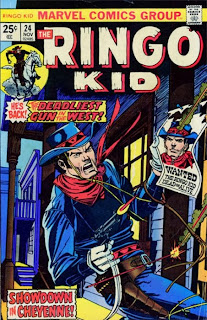 In the Avengers story “Go West, Young Gods,” you merged superheroes and cowboys into one tale, doing it again years later in a West Coast Avengers arc that included some controversial elements. How do you think that genre-blending worked? [side note: as a young reader, Avengers 142 blew my mind.]

I think it worked great. I brought the Two-Gun Kid back from the original meet-up because he was the most superhero of the cowboys, and really wanted to explore a man from a simpler time in the modern realm with supervillains - i.e., I would have continued to blend the genres. But I was just too busy right then and couldn’t get to it before I left Marvel the first time. (In 1999, I reworked the idea into a proposal called "Guns of the Y2K" for DC, but they didn't want it.) 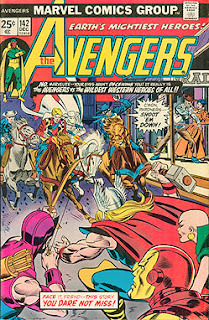 The Avenger Hawkeye was central in both those story arcs- was that a coincidence, or was there something inherent in the character that made him suited to a western setting as well as a modern one?

It was some of both. He just happened to be there, but his arrow thing was the closest to a Western hero so his presence helped shape what I did.

You collaborated frequently with the late Marshall Rogers. What can you tell us about him?

Marshall was a combination of laid back and obsessive. He was never in any hurry to finish a job, but he wanted everything he did to be the best he could make it. Our last published job together, after doing the unpublished dark detective iii, was BLACK RIDER, an update of the old character. Putting the hero in New York when horses were still on the streets was something we were looking to play with a lot. I do love taking the Westerns out of their established environment. 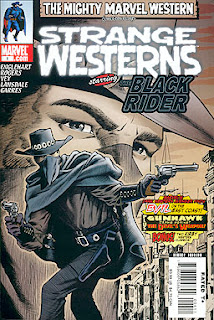 Your Native American-themed Coyote has been very influential. Why do you think that is? How did you get the idea for the character? [interesting side note: though their personalities are very different, Coyote and your version of the early Shang-Chi are similar in a lot of ways- I had never noticed that before. The naïve youth, sheltered throughout his life, entering a world he does not understand, etc.]

Well, the Coyote legend obviously predates my take on it, so a lot of credit goes to Paiute spirituality. But the character that came out of that was (a) an actual Native American, and (b) fun. I see where you're going with Shang-Chi, but he was never "fun." He was very composed and committed, while Coyote was always loose, and sometimes too loose. Also, since Coyote is owned by me, he gets to wander through other things I write, but Shang-Chi, most unfortunately, is trapped by the fact that Marvel no longer has the rights to Fu Manchu and so can't be reprinted. 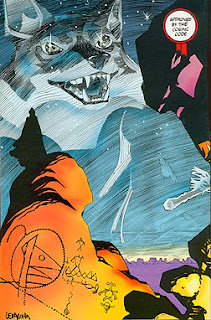 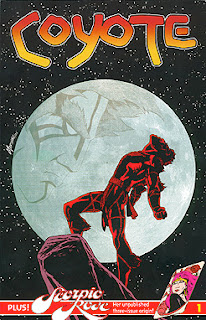 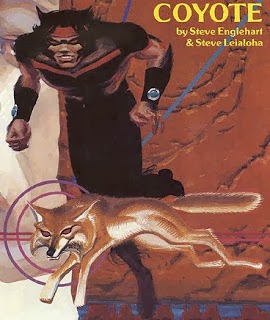 Is there a western character you haven’t written for that you could see yourself doing, if the opportunity arose?

Not necessarily. But I'll take the opportunity to toss in my Western stories story: one night at a party, I had a long talk with Gil Kane about his many years on Western comics, and he allowed as how his favorite Western writer was Ernest Haycox. I was unfamiliar with Haycox, but I started searching for the old paperbacks. One day, on one of those collector's dream days, I went into a bookstore in Glendale, California, and found that Haycox's agent had just sold them his entire office reference collection of Haycox of paperbacks, which I then bought for myself. Haycox's most famous story became the move Stagecoach, and the interesting thing is, the character (Ringo) that John Wayne played in the film sounded exactly like John Wayne, only the story obviously predated the movie. In my opinion, Wayne based a lot of his persona on Haycox's writing - which went on to inspire Gil Kane - which went on to entertain me. (This was after I had done my Westerns.) So if I did a Western, it'd probably be strongly influenced by Haycox, because that's a pedigree I can believe in.

Finally, are there any new or upcoming projects you’d like to direct our readers’ attention to?

Just my series of novels - Long Man, Plain Man, Arena Man - which have no pictures but still have what I hope are decent stories - and guest appearances by Coyote and Scorpio Rose. 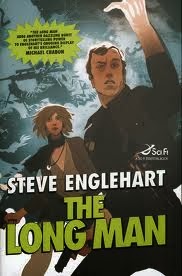 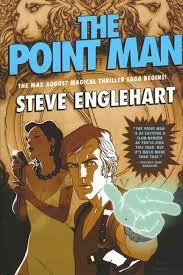 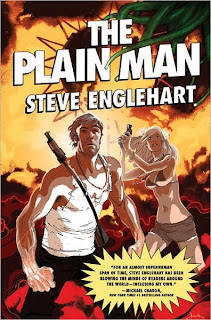 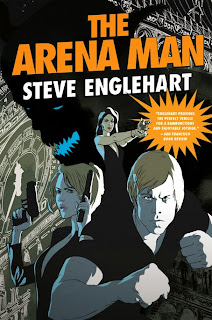 Many thanks to Steve for his time... go check out his Max August novels!

Also, the Black Rider story he did with Marshall Rogers is reprinted in the very nice hardcover book MARVEL WESTERNS.