Review Roundup: The Quick and the Dying 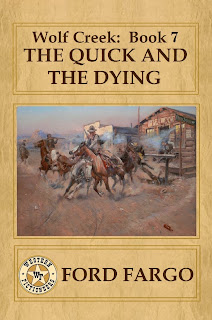 The last time former outlaw leader Sampson Quick encountered his old gang, he had to kill a couple of the ingrates to convince them he was out of the business for good. Now the notorious Hounds gang is back, looking for Quick’s help with a raid on Wolf Creek’s bank — and they’re not inclined to take “no” for an answer.

Since his arrival a few short months ago, the good folks of Wolf Creek have embraced Quick, whom they know as effete British painter James Reginald De Courcey. They consider him a mite odd, but mostly harmless. If only they knew….

The Quick and the Dying, the seventh book in the Wolf Creek series, seems almost a transitional piece. Things have settled down a bit in town now that the Kiowa are talking peace, the gang of leftover border ruffians that terrorized everyone in books 1 and 5 have been dispatched once and for all, and the megalomaniacal rancher nearby was handed his hat, at least temporarily.

Nothing is ever as it seems in Wolf Creek, though. Even the peace isn’t very peaceful, as town drunk Rupe Tingley discovers when the mugging he’s trying to avoid turns into accidental arson. Tingley’s creator, Matthew Mayo, does a remarkable job of conveying a drunk’s alcoholic haze in the first chapter. While the flophouse in which he lives burns around him, Tingley descends into an imaginary hell of flashbacks interspersed with eerie lightning strikes of clarity in the present. By the time De Courcey shocks the entire town by singlehandedly dragging Tingley from the inferno, readers will be ready to hop on the sobriety wagon themselves.

From there, the story departs into a rattlesnake’s nest of plots, subplots, counterplots, double-dealing, and assorted intrigue that is nothing short of dizzying. Quick/De Coursey (written by Kerry Newcomb) and his dilemma, which form the spine of the tale, rapidly recede behind a handful of other schemers who seem to be laying foundations for double-crosses in the future. Chief schemer to watch: photographer Wilson Marsh, who’s scummier than ever before. In Marsh, Jackson Lowry has created a skin-crawling everyday evil that fascinates.

Except for town marshal Sam Gardner (Troy Smith) and deputy Seamus O'Connor (Wayne Dundee), the point-of-view characters in The Quick and the Dying are ones who haven’t been heard from in a while. In addition to De Coursey, Tingley, and Marsh, bounty hunter Rattlesnake Jake (Phil Dunlap) is back and as casually intimidating as ever. Frank Roderus’s barber John Hix continues his understated channeling of Sweeney Todd in the Old West. By the time all the unusual suspects finish laying their plans and forming unholy alliances at the climax, a shootout in the bank should be the least of anyone’s concerns.

The Quick and the Dying ties up one loose series thread quite tidily. At the same time, the book opens so many new cans of worms that the writers should have enough bait for years. How all of the new threads ravel ought to be interesting to watch.


Kathleen Rice Adams is a Texan, a voracious reader, a professional journalist, and an author. She received a review copy of Wolf Creek Book 7: The Quick and the Dying from the publisher. Her opinions are her own and are neither endorsed nor necessarily supported by Western Fictioneers or individual members of the organization. Links in the review are for convenience only; they do not produce affiliate revenue.