Writing about Indians When You're Not One: Space and Time

I've talked a lot in this blog series about cultural misunderstandings between settlers and Indians which extend into the present. This time around I'm going to talk about some very fundamental differences- Europeans did not realize that indigenous peoples had ideas about space and time that were radically different from theirs. If they weren't on the same page with those basic things, they were on a trajectory for mutual confusion.

This is demonstrated by the map below. Written on deerskin, it was presented to the governor of South Carolina in 1721 by an Indian (most historians say a Catawba, though a few argue for Cherokee.) It was a map of the Southeast... but probably not like any map of the Southeast you've ever seen. 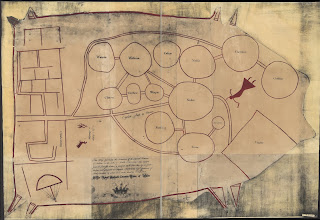 As you can see, the map is a mixture of geographic and imagined space. The city of Charleston is to the left. A coastal city, any European would have put Charleston on the right, using the European cartographic tradition of right=east.

The most important thing to note, however, is everything to the right of the city, which is meant to illustrate for the governor the various tribes of the Southeast. The native map-maker does not use a geographic representation; instead, as was the Indian custom, his map showed alliances, influence, and other relationships. Each tribe is a circle.

This goes to the fact that Indians, though they could certainly be territorial, did not have clearly defined geographic borders in the same way Europeans did. As we have discussed, neither did they have the idea of the land in a certain region being owned by anyone, though certain tribes might have the right to use it.

While we're on the subject of maps, I have another misconception to clear up. In my office I have a copy of this map, showing the location of many North American tribes: 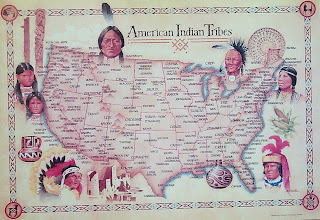 It is a very handy map to have, naturally. And much of it we are aware of- Seminoles are native to Florida, Comanches to West Texas, Sioux to the Great Plains.

This map shows the location of the tribes when Europeans encountered them. In some cases the tribes had been in that location for centuries, in other cases far less -but we have the tendency to freeze them in amber, and assume where they lived during "American history" is, in every instance, where they had been forever. But tribes moved. In fact, the very arrival of Europeans resulted in waves of migration...then when those Europeans encountered the peoples whose migration they had triggered, in their new location, they assumed those people had always been right there. 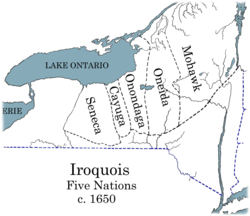 The Dutch encountered the Iroquois in their Great Lakes home in the 1600s... in that case, the Iroquois actually had been in that area for centuries. However, the fact that the Dutch traded guns to their Indian allies, whereas the French initially refused to do so for their own Huron allies, resulted in a huge shift in the balance of power (the Dutch were later replaced by the English, who kept all the Dutch trade obligations with the Iroquois.)  The well-armed Iroquois expanded rapidly, chasing away their fur-trade competitors. The Sioux (comprised of the Lakota, Dakota, and Nakota) were pushed westward, onto the Great Plains (though many Dakota remained in Minnesota.) The Shawnee were pushed south, some of them winding up in Tennessee and South Carolina, which is where the English first met them. 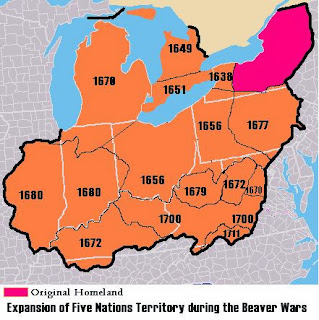 Another example: the Pueblo people. Like the Iroquois, they had been where we picture them being (Arizona and New Mexico) for many centuries, perhaps longer... they are probably the descendants of earlier groups the Anasazi and the Hohokam. (Their traditional enemies the Navajo and Apache, on the other hand, speak a language closely related to tribes in Canada and Alaska, from whence their ancestors had migrated.) 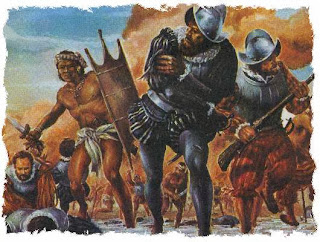 In 1680 the Pueblos revolted against their Spanish overlords- successfully. They drove the Spanish away (though they came back in force years later.) In doing so, they captured the large Spanish horse herd their occupiers had brought with them. They traded many of these horses to their neighbors to the north, the mountainous Shoshone... the Shoshone quickly mastered the use of the animals, venturing out into the Plains as they were now mobile and such a move was feasible. They became the premier horse traders of the plains, introducing selections from their herds to the Cheyenne, Arapaho, and those new arrivals the Sioux. One band of Wyoming Shoshones drifted south with their horse herds, ending up in Texas (perhaps because they knew there were a lot of Spanish in the region -with horses to take.) The local Indians called this Shoshonean group "Comanches." 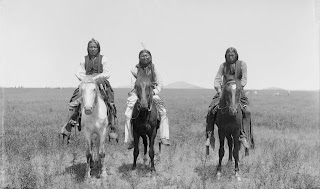 Over in Florida, there were a lot of native tribes -but none of them were Seminole. Most of the Floridean tribes died out from disease or war with the Spanish... their empty territory was occupied by Creek Indians who moved down from Georgia. Those Florida Creeks were known for welcoming runaway slaves from the English colonies into their midst. Runaway slaves were called cimarrons by the Spanish, from a word meaning mountain peaks -this is because runaway slaves on Caribbean islands often sought refuge in the mountains. The English corrupted this word for runaways (or wild people) from cimarron to "maroon." There were many maroon communities, for example, in Jamaica. In the North American colonies, it was corrupted into "Seminole." So A) cimarron, maroon, and Seminole all come from the same Spanish word, and B) Seminoles did not exist as a separate tribe until the late 1700s, and always held close ties with their Creek cousins. 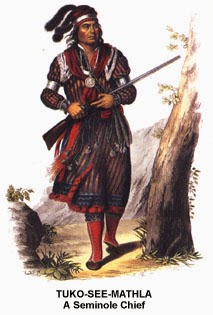 Interestingly enough, it didn't matter how much the various tribes moved around -a Native American map showing them would still look the same. Because it wouldn't show where they were physically, it would show how they were related to one another.

Finally, a few words about time.

For Indians, time does not work the same way. Time is a SPIRAL. This is even hard for non-Indians minds to wrap themselves around today, so imagine how incomprehensible it would have been in the colonial era. 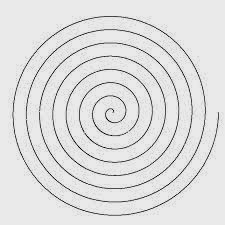 What does that even mean?

It means that events that happened in the past are not unimaginably distant. The past, and the future, are VERY CLOSE to the now. So close you could reach out and touch them.