Western Fictioneers Presents West of the Big River: The Bandit By Jerry Guin 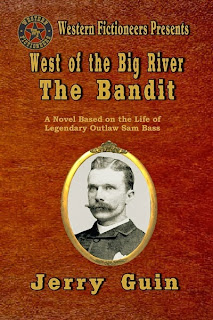 Sam Bass was just a farm boy from Indiana, but he wound up in Texas and became one of the most notorious outlaws in the history of the Old West. Texas history has often referred to Bass as "Texas' Beloved Bandit" or "Robin Hood on a Fast Horse"  Jerry Guin's historical novel THE BANDIT takes an unflinching look at the life and times of Sam Bass, from his almost accidental incursion into a life of lawlessness to his ill-fated end, and provides a vivid portrait of this violent era. Western Fictioneers is proud to present the latest entry in the acclaimed West of the Big River series.

Jerry Guin is best known as a short story writer with 28 to his credit. His book, "Trail Dust" captures 12 of those stories.

Recently he had stories appear in the following anthologies, "Outlaws and Lawmen" by La Frontera publishing and "Six-Guns and Slay Bells, A Creepy Cowboy Christmas" by Western Fictioneers. Also through Western Fictioneers, Jerry wrote chapter one of "Wolf Creek, Dog Leg City, Book 3."

Jerry lives in the extreme Northern California community of Salyer with his wife Ginny.

Smashwords Link
Posted by Livia J Washburn at 1:00 AM