Fencing the West With Devil's Rope by Tom Rizzo

When Joseph Glidden attended the DeKalb County Fair of 1873, he spotted something that triggered an idea. Not only would it change his life, but the way of life across the American West, as well.

During the fair, he saw Henry M. Rose, another Illinois farmer, exhibiting a wooden fence to which he had attached a row of sharp spikes along the sides. Rose said the barbs, that could be attached to existing fencing, would result in livestock keeping their distance because of the painful barbs of coming into contact with the sharp points.

Glidden, however, perceived a broader application by attaching the sharp barbs at intervals along smooth wire.

He then twisted the wires together to hold them in place and prevent them from sliding. The simple twisting action made his wire superior to others.

After submitting the design, the government issued Glidden a patent on Nov. 24, 1874. Other inventors filed court challenges against Glidden, but he survived litigation attempts.

The original idea for barbed wire surfaced in the early 1860s when President Abraham Lincoln made the Homestead Act law.

The Act provided 160 acres of unoccupied public land to each settler who would receive outright ownership as long as they lived on the land for five years and made improvements.

One of the big issues these settlers faced was buffalo and free-grazing cattle that destroyed crops.

The problem ballooned to catastrophic proportions, but most of the patents for barbed wire were ineffective. New York blacksmith Michael Kelly, in 1868, patented his "Thorny Fence" creation, the first successful barbed wire produced.

But, homesteaders found that Glidden's simple invention proved the cheapest and most durable way to fence their land. As a result, by 1880, more than 80 million pounds of it was sold, making it the most popular in the nation.

Since wood was in short supply, farmers built their homes of sod. Fencing was expensive. Wood rails had to be shipped in by train and wagon from distant forests. The process was time consuming.

Cattle ranchers, nevertheless, needed a reliable way to control their herds, and farmers realized fencing was necessary to prevent animals from trampling their crops.

At first, cattlemen disliked the idea because of the dramatic changes it caused.

The flat, rolling, treeless grassland and undefined prairies and plains that gave rise to the open-range cattle industry was undergoing a transition to farmland. 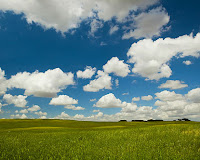 Barbed wire helped define the land, which attracted more settlers to the Plains.

But, as history shows, change can be painful.

Cattle that once roamed freely, were no longer able to do so as thousands of homesteaders began stringing barbed wire fence around their property. Ranchers found it impossible to stage long cattle drives across open range to railheads in Dodge City or Abilene.

Cattle herders realized more fenced-off land made them more dependent on dwindling public land, which would eventually become overgrazed. It signaled the end of cattle herding as they knew it, and threatened its very existence.

Cattle ranchers, who resisted this new way of life, weren't the only casualties of progress.

Nomadic Indian tribes - already forced from the lands where they once roamed freely - found their living patterns significantly altered. They began referring to barbed wire as the Devil's rope.

This reshaping of the West triggered numerous legal battles, along with bitter personal disputes.  The cost was high. Many lost expensive court battles. Others, however,  lost their lives.

This transition exploded into a conflict when some cattlemen, especially in central Texas, signaled their displeasure at the closing of the open range by cutting fences so their herds could find grazing land. Much of the violence ended in 1884 when a new Texas law made fence-cutting a felony. Other states approved similar laws.

The first major setback to barbed wire fencing took place in the mid- to late-1880s.

Cattlemen in the Texas Panhandle and adjacent ares erected large sections of barbed wire fences - known as drift fences - to prevent cattle in the north from migrating onto southern ranges. During the blizzard conditions of the Northern Plains, cattle instinctively turned south which caused overcrowding and decimating what remained of already overgrazed grasses of the Panhandle.

Extreme winter conditions on the Plains in 1885-1887 forced cattle in the north to move as far south as they could until halted by the drift fences. This created what would be called "the big die-up."

Once the cattle reached the fences they couldn't move forward, and wouldn't turn back. Gathered together against the wire without warmth or food and water, they either smothered or froze to death. Some cattlemen lost as many as three-quarters of their herds. In 1885, a federal law was enacted aimed at preventing installing such fencing across public domain land. 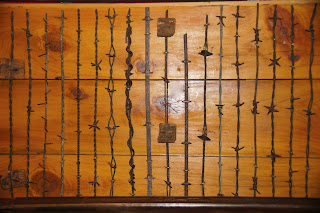 Barbed wire collectors have their own organizations, including:

Joseph Glidden's basic design is still in use.

His simple adaptation - cheaper to erect than any alternative - made him the Father of Barbed Wire, and forever changed the landscape of American West.