THE FRONTIER by ROD THOMPSON 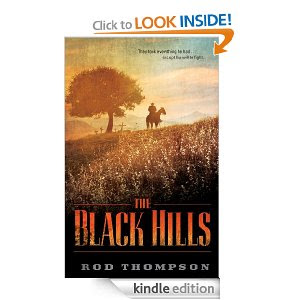 The theme song of “Mad About You” had Jamie and Paul jumping into marriage as the final frontier. Captain Kirk took the Enterprise “Where no man has gone before…into the final frontier.” According to Webster’s Dictionary, Frontier is “1 the border between two countries 2 the part of a country that borders on an unexplored region 3 Any new field of learning."

My new laptop with a fancy name and enough memory to run a small country found the following bits and pieces. From here on, very little is my original material. It is mostly a pot pourri of information my tangenting mind found interesting while researching for my fictional epic“The Black Hills”and glued together. A frontier is the political and geographical areas near or beyond a boundary. The term came from French in the 15th century, with the meaning "borderland"—the region of a country that fronts on another country. The idea of a "frontier," of a place that is an edge between the known and the unknown, the settled and the wild, has a prominent place in American history.

The word "frontier" also means a region at the edge of a settled area, especially in North American development. It is a transition zone where explorers, pioneers and settlers were arriving. That is, as pioneers moved into the "frontier zone", they were changed by the encounter.

In the earliest days of European settlement of the Atlantic coast, the frontier was essentially any part of the forested interior of the continent lying beyond the fringe of existing settlements along the coast and the great rivers, such as the St. Lawrence, Connecticut, Hudson, Delaware, Susquehanna River and James. From there it hopscotched its way across the country in bits and pieces. Early frontier areas east of the Appalachian Mountains included the Connecticut River valley.

Most of the frontier movement was east to west, but there were other directions as well. The frontier in New England lay to the north; in Nevada to the east; in Florida to the south. Throughout American history, the expansion of settlement was largely from the east to the west, and thus the frontier is often identified with "the west". On the Pacific Coast, settlement moved eastward. In New England, it moved north.

As settlers poured in, the frontier districts first became territories, with an elected legislature and a governor appointed by the president. Then when population reached 100,000 the territory applied for statehood.

The period after 1775 is sometimes referred to as the Wild West, referencing the largely lawless nature of much of the pattern of settlement which ensued immediately after the Louisiana Purchase opened the frontier west of the Mississippi river to settlers from the established colonies on the East coast.

Daniel Boone (November 2, 1734 [O.S. October 22] – September 26, 1820) was an American pioneer, explorer, and frontiersman whose frontier exploits made him one of the first folk heroes of the United States. Boone is most famous for his exploration and settlement of what is now Kentucky, which was then part of Virginia but on the other side of the mountains from the settled areas. Despite some resistance from American Indian tribes such as the Shawnee, in 1775 Boone blazed his Wilderness Road through the Cumberland Gap in the Appalachian Mountains from North Carolina and Tennessee into Kentucky. There he founded the village of Boonesborough, Kentucky, one of the first American settlements west of the Appalachians. Before the end of the 18th century, more than 200,000 European people migrated to Kentucky/Virginia by following the route marked by Boone.[2]

Following the victory of the United States in the American Revolutionary War and the signing Treaty of Paris in 1783, the United States gained formal, if not actual, control of the British lands west of the Appalachians. Many thousands of settlers, typified by Daniel Boone, had already reached Kentucky and Tennessee and adjacent areas. Some areas, such as the Virginia Military District and the Connecticut Western Reserve (both in Ohio), were used by the states as rewards to veterans of the war. How to formally include these new frontier areas into the nation was an important issue in the Continental Congress of the 1780s and was partly resolved by the Northwest Ordinance (1787). The Southwest Territory saw a similar pattern of settlement pressure.

In 1800 the western frontier had reached the Mississippi River. St. Louis, Missouri was the largest town on the frontier, the gateway for travel westward, and a principal trading center for Mississippi River traffic and inland commerce.

In 1846 about 10,000 Californios (Hispanics) lived in California, primarily on cattle ranches in what is now the Los Angeles area. A few hundred foreigners were scattered in the northern districts, including some Americans. With the outbreak of war with Mexico in 1846 the U.S. sent in Frémont and an army unit, as well as naval forces, and quickly took control. As the war was ending gold was discovered in the north, and the word soon spread worldwide.

Thousands of "Forty-Niners" reached California, by sailing around South America (or taking a short-cut through disease-ridden Panama), or walked the California trail. The population soared to over 200,000 in 1852, mostly in the gold districts which stretched into the mountains east of San Francisco.

For the next century, the expansion of the nation into these areas, as well as the subsequently acquired Louisiana Purchase, Oregon Country, and Mexican Cession, attracted hundreds of thousands of settlers. The question of whether the Kansas frontier would become "slave" or "free" was a spark of the American Civil War. In general before 1860, Northern Democrats promoted easy land ownership and Whigs and Southern Democrats resisted. The Southerners resisted Homestead Acts because it supported the growth of a free farmer population that might oppose slavery.

When the Republican Party came to power in 1860 they promoted a free land policy — notably the Homestead Act of 1862, coupled with railroad land grants that opened cheap (but not free) lands for settlers. In 1890, the frontier line had broken up (Census maps defined the frontier line as a line beyond which the population was under 2 persons per square mile).

The American frontier was generally the most Western edge of settlements and typically more free-spirited in nature than the East because of its lack of social and political institutions. The idea that the frontier provided the core defining quality of the United States was elaborated by the historian Frederick Jackson Turner, who built his Frontier Thesis in 1893 around this notion.
The idea of a "frontier," of a place that is an edge between the known and the unknown, the settled and the wild, has a prominent place in American history, but with the continual development of new equipment never before considered possible, tiny tinytiny creatures developing tiny eco-systems, previously unreachablegreater depths in oceans discovered, and scientists now realizing the universe we know to be only about three percent of the total universe, can there trulyever be a final frontier? I think not. But that is just this country boy’s cracker barrel philosophy.

To end the War of 1812 John Quincy Adams, Henry Clay and Albert Gallatin (a leading anthropologist) and the other American diplomats negotiated the Treaty of Ghent in 1814 with Britain. They rejected the British plan to set up an Indian state in U.S. territory south of the Great Lakes. They explained the American policy toward acquisition of Indian lands:

The United States, while intending never to acquire lands from the Indians otherwise than peaceably, and with their free consent, are fully determined, in that manner, progressively, and in proportion as their growing population may require, to reclaim from the state of nature, and to bring into cultivation every portion of the territory contained within their acknowledged boundaries. In thus providing for the support of millions of civilized beings, they will not violate any dictate of justice or of humanity; for they will not only give to the few thousand savages scattered over that territory an ample equivalent for any right they may surrender, but will always leave them the possession of lands more than they can cultivate, and more than adequate to their subsistence, comfort, and enjoyment, by cultivation. If this be a spirit of aggrandizement, the undersigned are prepared to admit, in that sense, its existence; but they must deny that it affords the slightest proof of an intention not to respect the boundaries between them and European nations, or of a desire to encroach upon the territories of Great Britain. . . . They will not suppose that that Government will avow, as the basis of their policy towards the United States a system of arresting their natural growth within their own territories, for the sake of preserving a perpetual desert for savages.

To order a copy of my book, THE BLACK HILLS, go here: