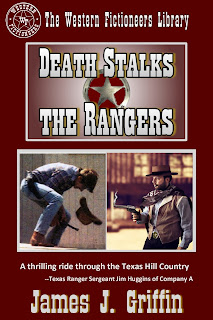 When a Texas Ranger is murdered, his fellow Rangers will stop at nothing to find his killer! Lone Star lawmen Sean Kennedy and Levi Mallory follow a cold trail across Texas to track down the man who shot Ranger Thad Dutton, and neither vicious outlaws nor a ruthless town boss will keep them from settling the score for their fallen comrade. Acclaimed Western author James J. Griffin returns with another action-packed, gunsmoke-laced tale of the Texas Rangers with DEATH STALKS THE RANGERS.

“James J. Griffin provides another exciting Western adventure in Death Stalks the Rangers, as new hero Sean Kennedy uses fast guns and fists, along with a keen intellect, to solve the mystery of a fellow Texas Ranger's murder. As always, Griffin gives the reader plenty of action, colorful characters, and a vivid sense of the Texas frontier.”
-- James Reasoner

Barnes & Noble
Posted by Livia J Washburn at 1:02 AM