Joe R. Lansdale has had a pretty storied career (pun intended.) He has written in multiple genres: horror, science fiction, mystery, superhero comics, and (of course) westerns. Along the way he has won all kinds of recognition: the Edgar Award, eight Bram Stoker Awards, the British Fantasy Award, and the World Horror Convention Grandmaster Award. And the Horror Writers Association’s lifetime achievement award. Lansdale is also a martial arts instructor, and is in both the United States and International Martial Arts Halls of Fame. 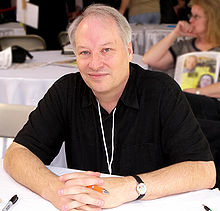 I first discovered him in the early 1990s, when he wrote the first of three Jonah Hex miniseries for DC Comics, and, for Topps Comics, The Lone Ranger and Tonto. This led me to seek out his prose, and I was glad I did –his novella "Bubba Ho-tep" (later made into a movie starring Bruce Campbell) immediately became, and remains, one of my favorite stories of all time. "Incident on and off a Mountain Road" ranks pretty high on my list, as well. 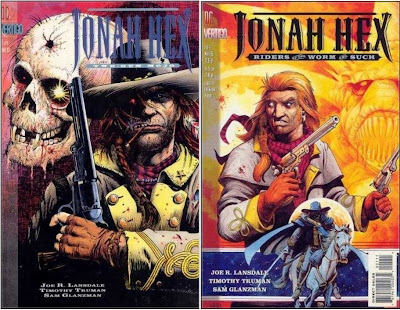 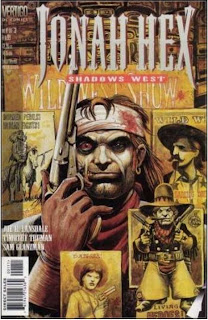 Joe has been gracious enough to come visit us today, and answer a few questions about his work.

What writers have influenced your work the most?
So many it’s hard to list. I loved early on Twain and Jack London and Edgar Rice Burroughs (he is my sentimental favorite writer), Robert Bloch, Raymond Chandler, James Cain, Dashiell Hammett, Ray Bradbury, Charles Beaumont, Richard Matheson. Jack Schaffer’s SHANE, Fred Gipson’s novels OLD YELLER, SAVAGE SAM and HOUND DOG MAN, the first two especially, Kipling, Flannery O’Conner, F. Scott Fitzgerald, Hemingway, some Faulkner, Larry McMurtry, primarily the novels that more directly related to the West, Brian Garfield, who seems to be mostly forgotten these days, Thomas Berger’s LITTLE BIG MAN, and I liked a lot of his other novels as well. Charles Portis,  man, the list can go on and on. At different times in my life different writers have influenced or inspired me, and at other times a whole different group, and then finally I found my voice, but that doesn’t keep me from still loving those writers, and certain ones I reread frequently just to clear the palate and for the most important reasons. I like good writing and I like good stories.

You’ve written Jonah Hex and the Lone Ranger- are there any iconic western characters, comics or otherwise, you’d like to tackle someday?
I also wrote the lesser known Marvel Western character Gunhawk. It was a short piece for Western anthology they did. I created a Steam Powered Cowboy for them as well, and I wrote a kind of moody short Zorro story for a Zorro Anthology. There are plenty of other Western characters in my own work. As for comics, I think Tomahawk was one I wanted to do, or the original Ghost Rider. But in many ways I feel like I’ve moved on and am wanting to do my own work exclusively, which is what 98 percent of my work has been anyway. Still, I’m glad I had the opportunity to write about those Western characters, and I never say never. Something came up that I really wanted to do, well, I just might do it. One of my own stories, THE CRAWLING SKY, was recently adapted to comics by my son, Keith, and that’s cool, to see the story come alive in that form, as well as the original story. The character is my Reverend from DEAD IN THE WEST and several novellas and short stories. 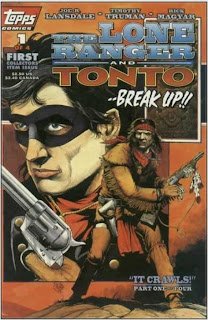 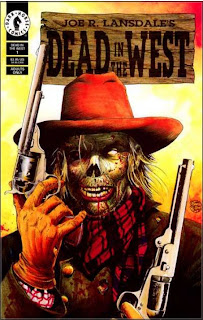 “Weird Westerns” have grown increasingly popular in the last few years- why do you think yours have been so well-received for so long?

Weird Westerns are really a very small part of my output, but fortunately most of the Weird Westerns I wrote impacted the field. I keep getting emails, letters, books from writers who read either Dead In The West, or one of my comics, something like that, and said, this led me to loving Westerns, especially Weird Westerns. I think the Western is so mythic to begin with, and adding horror elements makes it an even more amazing kind of myth. Of course, truth is, I love traditional and off-beat, but not supernatural Westerns even more. A new book of mine coming out this fall is something of a Western, THE THICKET, but it doesn’t contain any supernatural or fantastic elements, though it isn’t exactly traditional. 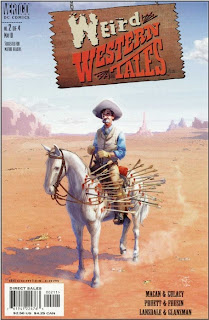 You write in a lot of genres- how do you approach a western differently?
I write in all genres the best I can. I don’t always know what it is I’m going to write until I start, but as for voice, I find that I often feel more comfortable writing about historical periods. My dad, long gone now, was born in 1909, and his voice, the stories he told me about the Old West, about growing up, about The Great Depression, the stories my mother told me, my grandmother, who was born in the 1880s and nearly lived to be a hundred, had actually seen Buffalo Bill’s Wild West Show when she was a child. I also grew up on TV Westerns and Western movies, read some Western short stories by O’Henry, Bret Harte, Twain had a few, though I didn’t actually start reading Western novels regularly until I was in my late teens, early twenties, and at first Max Brand and Zane Grey, but then I discovered Glendon Swarthout’s THE SHOOTIST, THE OUTLAW JOSEY WALES, by Forrest Carter, and SHANE by Jack Schaffer, LITTLE BIG MAN by Berger, and I wondered what had kept me from reading Westerns all along. I started devouring them after that. I also love reading Western history, and that’s something I always did read growing up, even before I was reading Western novels. So, a lot of my research was done early, though, of course if I feel I need to know something I make a point of looking it up.

I much preferred your East Texas approach to Jonah Hex than the other (very convoluted and unbelievable, in my opinion) approaches taken by other writers. What makes an East Texas western character unique when compared to other regions, do you think?
Thanks. Well, I think East Texas is such a mixture of cultures, and unlike the rest of Texas it is wooded and has lots of water, and is something of a less swampy Louisiana, though we have a bit of that as well. We’re a cross between Southern Gothic, Western, black and Indian and Mexican and Cajun culture. It’s unique, and very much unlike the rest of Texas.

What is the hardest part of writing a western?
All books are as hard or easy as the other. I don’t feel anything that especially hard about the genre, though that doesn’t mean I don’t work to make it as good as I can make it. I do. In some ways, Westerns are among the easiest things for me to write, and I’m surprised I haven’t written more of them, and hope to write more in the near future. 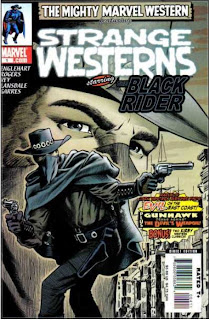 What projects of yours, out now or coming up, should we know about?
Well, the early 20th century Western/Fable, THE THICKET comes out in September, but right now, just out in paperback is EDGE OF DARK WATER, a novel about 1930’s East Texas, crime and Southern Gothic, and a journey novel. I’m really proud of both of them. 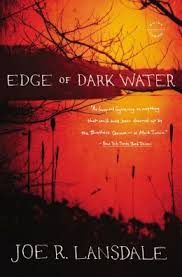 My thanks to Joe for joining us today!  -Troy D. Smith