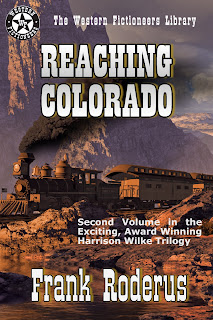 The reluctant protagonist of Frank Roderus's award-winning LEAVING KANSAS returns in REACHING COLORADO, the second volume in the Harrison Wilke Trilogy. Searching for his destiny in Colorado, Harrison finds himself caught up in a wild chase involving a fortune in stolen gold. But just who stole the gold, and will Harrison survive to set things right? REACHING COLORADO is an exciting tale filled with action, humor, and colorful characters, all from Frank Roderus, one of the most popular and admired modern authors of Western fiction.

REVIEW:
When we last saw Harrison Wilke, he was leaving his home in Kansas after a near-tragedy made him no longer welcome there, in the award-winning and aptly titled LEAVING KANSAS. The second novel in the Harrison Wilke Trilogy, REACHING COLORADO, finds him on his way to Colorado Springs, which he has heard is a bastion of the Eastern-style civilization he craves so badly.

Unfortunately for Harrison, who is about as far from a typical Western hero as you can find, he gets mixed up with what appears to be a gang of outlaws on the run with a small fortune in gold coins. When Harrison winds up in possession of the money, he just wants to turn it in to the law before the outlaws can catch up to him and kill him. As it always happens, though, doing the right thing, or at least what Harrison perceives to be the right thing, turns out to be a lot more difficult and dangerous than the young man expects. Riding the rails with hoboes, consorting with soiled doves, and falling down a mine shaft are just some of the adventures Harrison has to survive along the way.

As usual, author Frank Roderus spins this picaresque yarn with great verve, making Harrison a thoroughly unsympathetic character in most respects while still rendering him likeable enough for the reader to root for him. REACHING COLORADO is great entertainment, and I'm looking forward to the concluding volume of the trilogy, coming soon from the Western Fictioneers Library.
-- James Reasoner

BARNES & NOBLE
Posted by Livia J Washburn at 1:01 AM