Now Available -- West of the Big River: The Lawman by James Reasoner 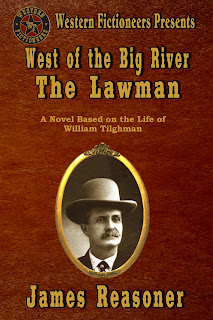 William M. "Bill" Tilghman had one of the most illustrious careers of any Old West lawman, serving as sheriff, town marshal, and deputy United States marshal in some of the toughest places west of the Mississippi. But he faced perhaps his greatest and most dangerous challenge when he rode alone into the wild Oklahoma Territory settlement of Burnt Creek on the trail of a gang of rustlers and outlaws with some unexpected allies . . .

THE LAWMAN, by New York Times bestselling author James Reasoner, is the first novel in a new series from the Western Fictioneers, West of the Big River. These are brand-new, original short novels inspired by real-life characters and actual events from the exciting, colorful history of the American frontier, written by today's leading Western authors including Robert J. Randisi, Michael Newton, Jackson Lowry, Frank Roderus, Bill Crider, Matthew P. Mayo, James J. Griffin, and many others. Don't miss any of these action-packed short novels that showcase the best of the American West!

He still hadn't gone to sleep when he heard what sounded like thunder. He was lying on his back, so he could see the whole sweep of the sky above him, and no clouds obscured the millions of stars in that vaulting black arch. That couldn't be thunder, Tilghman thought as he sat up and instinctively reached for the rifle beside him.
And then suddenly he knew what was making that sound.
Hooves. Thousands of hooves.

I grew up a child of the 50’s.  Black and white TV, Saturday afternoon matinees, and ACE Double Westerns for 35 cents. It was a wonderful time, chock full of cowboys on the small screen, in the movie theatres and dominating the book shelves.

It was a time filled with anticipation. The only major disappointment was in finding out the Saturday matinee was going to feature Eddie Dean.

James Reasoner’s new book about Bill Tilghman, the premiere entry for Western Fictioneers West of the Big River, is filled with that kind of great anticipation. The story is filled with unexpected twists and turns. Tilghman comes leaping from the pages as a character who is entirely believable; a no-nonsense lawman with an innate sense of justice who provides a wonderful surprise in his resolution of a unique problem. Yep.  Tilghman not only thinks outside of the box, he reacts accordingly. And occasionally loses a fight.

This book is a real page-turner; a delight from beginning to end.