What, me again? I wrote about My Favorite Western Novel on Sunday -- all about True Grit, so if you missed it, here's the link. Today's post -- more about me. Probably *far* more than you want to know. Bear with me, folks. I ran out of ideas for a topic this month. I'll try to come up with something more interesting in May. 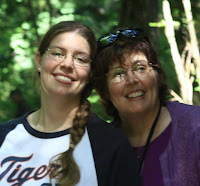 1. The most horrible day of my life was followed by the most exciting day. Usually Christmas is pretty happy and fun, but that year I was three weeks overdue with my first (and only) child. If I'd found a knife, I'd have ripped that watermelon out myself. Instead, I suffered through a sleepless Christmas Eve, waddled to my parents' house and then visited my in-laws Christmas Day. Next day my husband drove me to the hospital  for induction, and the rest is history - but no natural delivery. Ha. I'm very grateful for modern drugs and hospitals. 100 years ago, my daughter and I would never have survived. No way. Now, she's my #1 fan, beta-reader, proofreader and idea-generator. 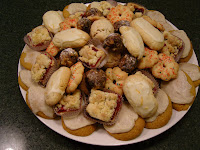 2. My favorite food is a cookie... or I should say a handful of cookies. I can't stop at one. Crunchy, plain sugar with icing, chock-full of nuts or M&Ms, or chocolate chips, or cranberries and walnuts, "icebox" or molasses, spiced with cinnamon, gingersnaps, lemon with powdery sugar, shortbread drizzled with chocolate, Christmas cookies of all kinds, Halloween haystacks or spiders - you name it a cookie, I'll try it. Mmmm. With tea or coffee. 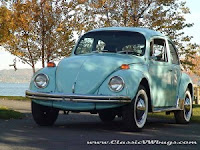 3. My favorite car I ever owned was my first -- a pale blue classic Volkswagen Beetle with a sunroof, 1971. Stick-shift, too, so I had to learn to drive it after I'd bought it. No heat to speak of in winter, so I kept a thick wool blanket to spread over my lap and legs, plus kept the ice-scraper handy to scrape the inside windshield so I could see to drive. But summer driving sure was fun! My best friend used to stick her head out the sunroof (while I was driving, of course) and sing at the top of her lungs. Oh yeah. Good times.

4. Something you may not know about me is that I teased my grandmother mercilessly about her nickname. The story? The first grandchild of her oldest daughter (my mother was the baby of the family) couldn't pronounce Grandmother. So she ended up calling her "Mim." By the time I came around, I called her "Mimsy-Pie," which she loathed. I was a brat, what can I say? And I hadn't even read Carroll's Jabberwocky poem! Sooo, yep, you guessed it. When I met my husband and discovered his last name was Mims, I thought long and hard about how you can't mess around with God. He always has the last laugh. Trust me on that. And if anyone calls me Mimsy-Pie, I will smack them upside of the head.

5. I'm a product of the "melting pot" of the late 1800s. My maternal great-grandparents owned a prosperous farm in what is now Detroit, but back then was country. My great-grandmother, Adeline Maddelein (yep, her married name! Her sister-in-law was also stuck with a doozie, Madeline Maddelein), enjoyed having servants and took the interurban to shop in downtown Detroit at Hudson's. After selling the farm to a real estate developer after the turn of the century, they named the street after my great-grandfather. The name may be Belgian-French, we're not sure. My paternal grandfather, born in Kiev, came to America with five languages under his belt. 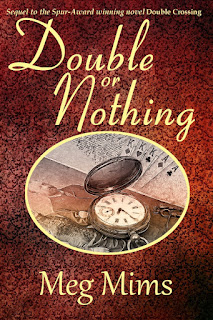 A mysterious explosion. A man framed for murder. A strong woman determined to prove his innocence.
October, 1869: Lily Granville, heiress to a considerable fortune, rebels against her uncle’s strict rules. Ace Diamond, determined to win Lily, invests in a dynamite factory but his success fails to impress her guardian. An explosion in San Francisco, mere hours before Lily elopes with Ace to avoid a forced marriage, sets off a chain of consequences.
When Ace is framed for murder before their wedding night, Lily must find proof to save him from a hangman’s noose. Will she become a widow before a true wife?