Starrs in The Nations

Two questions seem to regularly come up about my novel Red Lands Outlaw, the Ballad of Henry Starr: How did I come to write about Henry Starr? Was he related to Belle Starr?

The answers to both questions go back to the writing of my second novel Legends of Tsalagee, a mystery/adventure set in present day Oklahoma. The story revolves around the hunt for the Lost Treasure of Belle Starr, something I thought I’d invented. But when I started reading up on Belle for some of the back story, I discovered there actually is a legend about the outlaw stashing loot in a cave somewhere in eastern Oklahoma. So far as I know, that treasure hasn’t been found.

My Belle Starr research also led me, coincidentally, to Henry who was an accomplished and notorious Oklahoma outlaw in his own right, both in the I.T. and early statehood years. Amicable to a fault, Henry never wanted to hurt anybody or trouble them much, as long as they didn’t interfere with his business at hand, which was mainly robbing banks. His exploits fascinated me, so I decided a novel about this handsome, charming, and good-natured bandit would be a fun project. In Legends of Tsalagee I put him in as a minor character.

Belle and Henry weren’t related; not by blood, anyway.  The widow Belle Reed, the former Myra Maybelle Shirley from Missouri, married Sam Starr, a Cherokee bad man. One of Sam’s seven brothers was George “Hop” Starr, Henry’s father. It’s said Henry didn’t much care for Belle, and hotly denied any kinship. That’s not surprising as Belle Starr was not the glamorous "outlaw queen" the entertainment world would later design. She was mean, ruthless, and brutal; maybe even cold-blooded. Belle was murdered, shot in the back two days short of her 41st birthday. The law never found her killer. My guess, it probably wasn’t a priority, although a long list of suspects existed, including her own son.

This excerpt is from Legends of Tsalagee. In the story Belle Starr’s son, Ed Reed, knew he’d be a prime suspect in his mother’s murder as he’d more than once publicly threatened to kill her. Paranoid with this knowledge, he’d split his ma’s stash of loot with his sister Pearl, and lit out with his half from the homestead at Younger’s Bend on the Canadian. He traveled northeast deep into the Cherokee Nation, I.T. Here, he comes face-to-face with young Henry Starr, a surly fourteen-year-old.


Ed heard the sound of a round being levered into the firing chamber of a Winchester, but the late afternoon sun came from the same direction, so he couldn’t see who held the rifle. He pulled up on his reins and lifted his left hand. His right hand slid cautiously toward the holstered Colt at his waist.

“Name’s Ed Reed,” he said loudly into the glaring sun. “I come up from around Eufaula looking for some of my ma’s kin.”

Ed waited for several long seconds before he got a response.“Who’s your ma’s kin?” The voice sounded like that of a boy.

“She was married to Sam Starr. Her name is Belle Starr.”

More time slipped by in silence. Finally, the boy voice said, “Sam Starr was my uncle. I know who Belle Starr is, but she ain’t kin. She just married my uncle. I don’t like her much.”

“Well then, you’ll be happy to know she’s dead,” Ed said. “She was shot in the back and kilt yesterday. I had to hightail it out of there, because the sheriff is thinking I was the one who shot her.”

“Not to me, it don’t.” The boy walked around to the left side of Ed’s horse out of the sun’s glare. He pointed his rifle at Ed from about ten feet away. Ed took the boy to be about fourteen or fifteen.

“Your folks got a place around here?” Ed asked. He still kept his left hand in the air, and his right on his pistol handle. The boy didn’t say anything. He just kept his rifle leveled at Ed’s chest.

"’Cause I sure could use a hot meal. I been riding and pulling this mule since sunup. And I ain’t stopped to eat all day. My horse and mule could use a rest, too.”

The silent stare continued from the boy. “Of course, I’d be willing to pay your folks for their trouble,” Ed added. He smiled trying to show he meant to be friendly.

“You got money?” the boy asked.

The smile melted a little on Ed’s face and he moved his right hand back to grip his pistol. “Some,” he said. He was thinking he could slide off his horse to his right, draw his pistol, and fire at the boy under the horse’s neck. His horse might take a slug, but under the circumstances, it was his best chance. He was seconds away from putting that plan into action, when a man’s voice came from the trees. 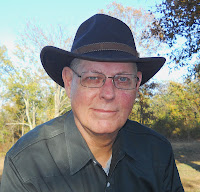 Phil Truman has authored three of what he calls, “Oklahoma-centric” novels. His first, GAME, an American Novel is a sports inspirational about the intensity and weightiness of schoolboy football. Legends of Tsalagee weaves a tale of mystery, adventure, and romance in a small town. A #1 Bestselling Western on Amazon, Red Lands Outlaw, the Ballad of Henry Starr is Phil’s first foray into the western genre in this historical novel about the life and times of an Oklahoma outlaw. He has won numerous awards for his short fiction, and his western short story “Last Will for an Outlaw” will appear in LaFrontera’s anthology, Dead or Alive, due to be released June 2013.
Phil’s website is: http://philtrumanink.com/
Posted by Phil Truman at 8:27 AM