First, let me offer hearty congratulations to the 2013 Peacemaker nominees. Authors and judges, y’all done good. If any nominees would like to see a review their story here, please get in touch. I’d be honored and delighted.

Now on to what the brush poppers found in the TBR pile. 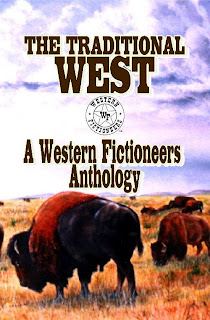 Prior to the Digital Age, readers and publishers tended to view short stories as somehow “less serious” than novels. Long-form fiction was an art; short stories almost represented a hobby, unless written by someone whose novels already were popular. Literary and popular magazines published short stories, but most paid only a token fee if they paid at all. Publishers infrequently released anthologies of shorter works, and the ones that did see ink usually were written by a single author who’d already made his or her bones in long-form fiction.

Thankfully, the short-story landscape is changing — in large part because of the growth of self-publishing. Although readers remain skeptical about self-published work (with good reason), they’ve also discovered that taking a chance on an inexpensive or free short story by an author with whom they’re unfamiliar may lead to a long-term love affair.

At 120,000 words, the volume is hefty, but each story is digestible in a single sitting — and I challenge readers to stop in the middle of any tale. Several of the shorts either won or were nominated for a Peacemaker Award. Four of those, in particular, stood out: Troy D. Smith’s “The Sin of Eli” (which won a Peacemaker), Rod Miller’s “The Death of Delgado” (which won a Western Writers of America Spur Award and was nominated for a Peacemaker), and Peacemaker nominees “The Way of the West” by Larry Jay Martin and “Panhandle Freight” by L.J. Washburn. The four stories are very different, but each displays a remarkable depth of character and a thoroughly enchanting “voice.”

“The Sin of Eli” and “The Death of Delgado” twist readers’ emotions and haunt the imagination with larger questions about morality, choices, and the meaning of life and love. “The Way of the West” is more lighthearted and frisky, producing both chuckles and cringes as drovers put a rancher’s mollycoddled heir through the ringer on a cattle drive. “Panhandle Freight” spins a thoroughly satisfying mystery in a very short space.

Let us hope publishing future volumes of The Traditional West becomes a tradition for Western Fictioneers. 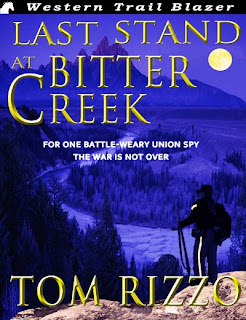 The Civil War is almost over when Union spy Grant Bonner receives his last assignment. Although he’s more than ready to go home and forget the past four years, he reluctantly agrees to a job he finds both distasteful and alarming: spying within the Union’s own ranks. The assignment goes south in a big way, leaving Bonner wounded and on the run, accused of grand larceny and murder. As he attempts to clear his name, he becomes both hunter and prey in a monumental chess match where all of the pieces are pawns.

Houstonian Tom Rizzo’s debut novel, Last Stand at Bitter Creek, wanders a bit in spots, much like the trail of the sociopath Bonner tracks. The writing stumbles in a few places, but almost every novel suffers that fate. The true test of a good story, in my opinion, is whether readers will remember the experience after they’ve finished the book. I’m still thinking about this one.

In Rizzo’s hands, Bonner, his tenuous supporters, and the villain become the sort of “sticky” characters that just won’t go away. Some of the bad guys are evil to the core; some of the good guys seem untrustworthy. Just as it appears Bonner is about to make a breakthrough, the invisible hand of Fate bumps the chessboard and scatters the pieces. By the conclusion readers may find themselves exhausted — in a good way.

Last Stand at Bitter Creek also is notable for the historical trivia Rizzo winds through the tale. Though the events that set the plot in motion may seem improbable, all are based in historical fact. History buffs will enjoy the end note. 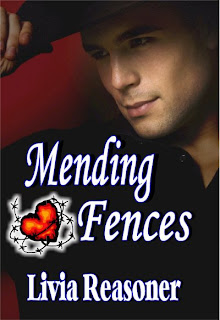 When a dime novel writer from Back East moves to the small frontier town of Zephyr, Texas, to care for her sister’s orphaned children, she falls right into the kind of gun-slinging adventure she might have invented.

Though marketed primarily as a “sweet” romance (very little harsh language and no explicit sex), Mending Fences plays equally well as a western. Set during the fence-cutting scrapes that took place in Brown County, Texas, during the 1880s, the story focuses as much on the burgeoning range war as it does on the budding relationship between closet dime novelist Brianna Stark and Seth Van Dale, who hasn’t managed to shed his reputation as a fast gun despite living quietly as a ranch foreman for the past five years.

Reasoner’s prose is engaging, seemingly flowing onto the page with an un-self-conscious strength that lulls readers into the tale like a river might carry a raft. There is comfort in that kind of book: Readers disappear into another time and place, into someone else’s life, with never a worry rapids lurk just around the next bend.

That is not to say there’s no excitement in the story — plenty of excitement adorns the pages. What readers won’t find is the type of over-the-top depictions of love and romance they might expect in a romance novel. Emotions ring true for both main characters without ever seeming overwrought. Men who eschew romance novels probably will enjoy this one.

Romance writers and western novelists alike will identify with Brianna, who is excruciatingly conscious of the flowery language and outlandish storylines upon which her successful career is based. The juxtaposition of Brianna’s style with Reasoner’s only emphasizes the effortless relationship Reasoner apparently has with words. Amusingly, not until the Big Love Scene at the very end does the story succumb to a few tricks of the romance-writing trade.

The sense of time and place in Mending Fences is extraordinary. Details are engrossing but not overwhelming, and they're never academic. For humor, adventure, family drama, and the pure joy of an effortless read, I highly recommend the book.


Kathleen Rice Adams is a Texan, a voracious reader, a professional journalist, and a novelist in training. She received review copies of all three books from the author or publisher. Her opinions are her own and are neither endorsed nor necessarily supported by Western Fictioneers or individual members of the organization.