I have to admit -here we are, four entries into our monthly Saturday Matinee feature, and I am really surprised no one has talked about High Noon yet. But on the other hand, that's a good thing, because it means I can. 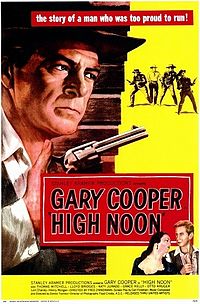 High Noon isn't just my favorite western, it's my favorite movie, period. (That list would be rounded out by Casablanca, The Godfather, It's a Wonderful Life, and To Kill a Mockingbird. Then Apocalypse Now, and then The Searchers... and so on and so forth.)

And I wouldn't be alone. The American Film Institute has ranked it #27 on its list of greatest movies, #2 in their list of westerns, and Will Kane as #5 on their list of greatest cinema heroes. Bill Clinton has proclaimed it his favorite movie of all time, and screened it in the White House 17 times. Eisenhower and Reagan loved it, too. 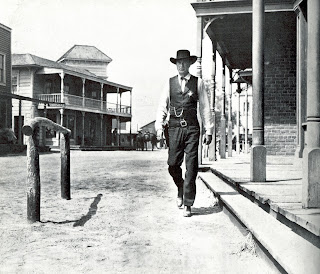 The film was released in 1952: directed by George Zinneman, produced by Stanley Kubrick and Carl Foreman (who wrote the screenplay), featuring an Academy Award winning classic theme song ("Do Not Forsake Me") and winning Gary Cooper his second Oscar. Katy Jurado won a Golden Globe for her role as Helen Ramirez. 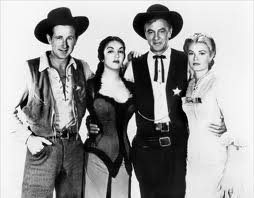 Most of you have seen it, I'm sure, multiple time. Gary Cooper is Will Kane, marshal of a small town called Hadleyville. It is his wedding day -he is marrying a Quaker girl, played by Grace Kelly, and has promised her to hang up his guns once they are married and become a storekeeper. 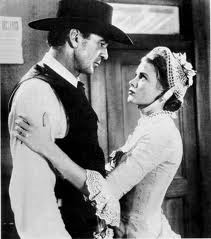 But then word arrives that Frank Miller is coming in on the train at high noon. Miller had been arrested by Kane and sentenced to hang, but got off on a technicality and is now returning to Hadleyville for his revenge. His gang is already at the depot, waiting for him to disembark. 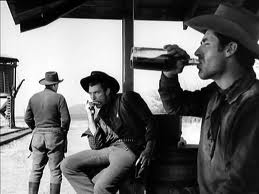 Kane decides he has to remain in town and do his job -running would only delay the inevitable. Plus, the town might suffer in his place if he ran. The minutes toward the crucial showdown click by in painfully real time. Kane's anxiety, and fear, grow with each passing minute. No one is willing to stand and help him defend the town, not even his deputy. His wife abandons him for being prepared to resort to violence. His friends in town hide from him when he comes looking for assistance, or make up excuses.

He will be standing alone, and will have virtually no chance to survive.

The emotion written on Gary Cooper's face earned him that Oscar. He is desperate; he is quietly terrified; he is betrayed and abandoned and grieved. At one point a little boy catches him with his face in his hands, crying. 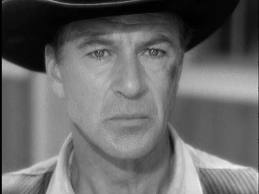 John Wayne was a better actor than a lot of people gave him credit for -but in my opinion he could never have pulled a role like this off. He could never have convinced the audience he was desperate and terrified. He would have gone out and faced the bad guys because he was John Wayne and that's what he did, and there would never be any doubt of the outcome.

Gary Cooper looked like a man who knew he was going to die, and didn't want to. But who bit that all back and went out to do what he knew was right, even if no one helped him, even if he knew he would almost surely die.

Of course -spoiler alert -he didn't die. He managed to wipe out the Miller gang -with some unexpected help from his Quaker wife, who came back to help him when no one else did, even taking a life. When it's over his "friends" come out of the woodwork, congratulating him, saying they knew he could do it all along. He gives them a piercing stare of righteous contempt and throws his badge into the dust, then rides away with his bride. Who, ultimately, did not forsake him after all. 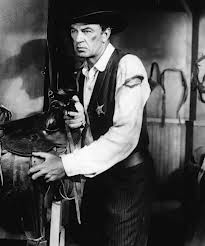 I've always suspected that the town's name, Hadleyville, was deliberately chosen to evoke Mark Twain's short story "The Man Who Corrupted Hadleyburg", about a town full of self-righteous people who are exposed as hypocrites and frauds.

When I was a kid, I didn't have a male authority figure in my life to give me moral guidance. I sort of hobbled together, from popular culture, several different things to help me figure out what it meant to be a man. When I first saw this movie, at the age of 8, it indelibly impressed on me just what a man is, and should be. Not the tough guy who always wins -but the guy who does what he knows is right, despite the odds and despite the cost, and even when it's scary, and does not waver. Will Kane, Atticus Finch, and George Bailey became my role models -and still are. 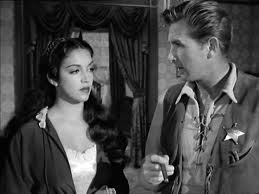 I was grown before I learned the fascinating story behind the story of High Noon.

Carl Foreman, the writer and co-producer, had drawn up an outline for a screenplay that would be about a small-town western marshal, and unfold in real time (long before Kiefer Sutherland and 24!) When someone pointed out that the plot was similar to the John W. Cunningham short story "The Tin Star," Foreman bought the film rights to the story (if you've read the story, you'll know it's not exactly High Noon.) Then Foreman started working on the screenplay. 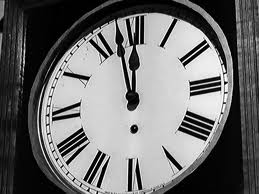 During that process, he was called before the House Un-American Activities Commission to testify. It was the height of the Red Scare, after all, and Joesph McCarthy had already claimed that the State Department was riddled with Communist spies. Like many liberals, artists, and academics, Carl Foreman had been associated with the Communist Party in the 1930s. He had left the party after a short time, a decade before his testimony was called for. However, he refused to "name names" in what he considered a witch hunt, and was branded an uncooperative witness. He was eventually blacklisted, and had to move to England to get work. 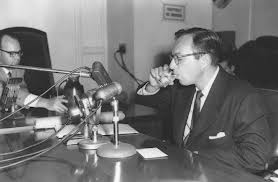 Foreman later claimed that his partner Stanley Kramer tried to get him off the High Noon project because he feared the repercussions of being associated with him; Kramer said their falling out was over other, non-political matters. Foreman was forced to sell his part of the production company, but the film's director George Zinneman and Gary Cooper insisted he still be involved in the film. Cooper, interestingly enough, was politically conservative and a member of the MPA (Motion Picture Alliance for the Preservation of American Ideals, for which John Wayne was a prominent spokesman)... he had been labeled a "friendly witness" before  HUAC, but had also refused to name names and later spoke out against blacklisting.

Several members of the cast and crew of High Noon were either blacklisted or "graylisted" (Lloyd Bridges fell into that latter category.) 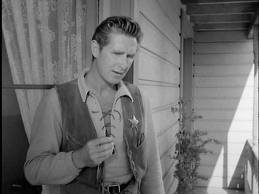 Many people on both sides of the political question believed that High Noon had actually been a parable about blacklisting and the McCarthy era. In a way, the cowardly citizens of Hadleyville "blacklisted" Will Kane, and all his alleged friends were scared to come to his defense. When he persevered, he had nothing but contempt for them (many people who did cooperate freely with HUAC and name names, once the blacklisting era was over, faced much animosity from their professional community and in ensuing decades were virtually blacklisted themselves.) 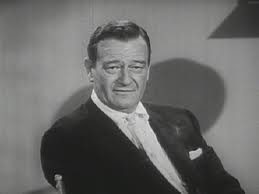 John Wayne, in particular, hated the movie. In a 1971 interview, he called High Noon "the most un-American thing I've ever seen in my life," and said he had no regrets about helping blacklist Foreman. (Nonetheless, he accepted the Oscar on behalf of his friend Gary Cooper, who couldn't attend the ceremonies.) In 1959, Wayne teamed up with director Howard Hawks to make a movie in response to High Noon: Rio Bravo (incidentally, another one of my favorite westerns.) In Rio Bravo, the town rallies around their marshal. 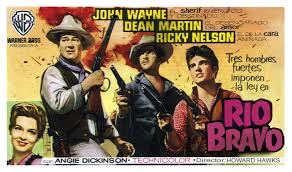 Howard Hawks later said: "I made Rio Bravo because I didn't like High Noon. Neither did Duke. I didn't think a good town marshal was going to run around town like a chicken with his head cut off asking everyone to help. And who saves him? His Quaker wife. That isn't my idea of a good Western."

All of that information provides a fascinating look into the 1950s and the Red Scare. That's why I discuss it at length in my American History classes (my students hear about westerns whether they want to or not.) It also makes the movie an interesting view when you look for those alleged hidden messages.

But the true power of High Noon lies in the story and the performances. Will Kane is the most heroic town marshal of the movies -no matter what Howard Hawks thought. 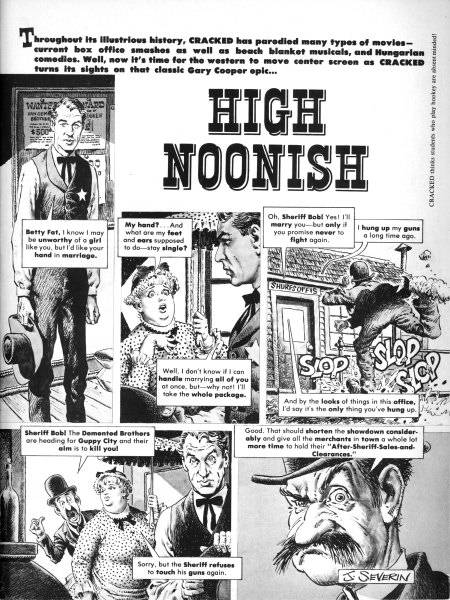