Safety at a civil war reenactment is a point of concern that encompasses more than just firearm safety, and it is the primary focus at every event. 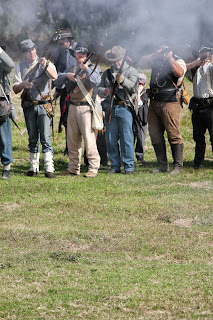 Although the rifles that we use are replicas, they can be live fired. However, at the reenactments, all we do is burn powder in them.  No projectiles of any kind are permitted at an event.  All weapons are inspected before each battle to make sure they are in good working order and to make sure they are cleared.

Even though there are no projectiles, burning black powder still shoots a spout of flame from the end of the barrel.  All firing is done at an elevated angle and never aimed directly at another person.  Weapons are also never fired within 25 yards of the opposing forces.

Cannons also add another element of danger and some events feature pyrotechnics to simulate the blast of a cannon ball, but those areas are always away from where the reenactors and are clearly marked off.

The other risks are the same kinds of things that are inherent in any outdoor activity.  Sometimes people step into holes marching across a field. Reenacting during summer months raises the risks of dehydration. Threatening weather always shuts down an event because we don't want to be carrying rifles or swords while lightning is striking.

Some reenactments feature cavalry battles and there's always the chance of a horse being spooked.  There are always EMTs on hand in case something does happen. 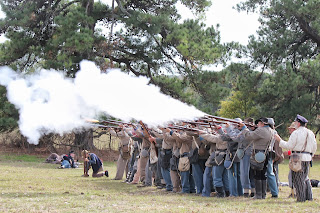 Taking hits during a battle is usually done at the individual's discretion, but care is taken when falling not to land in an ant bed or to fall in someone else's way.

Hearing protection is worn a lot of times using flesh colored ear plugs that can't be seen or by using pieces of cotton because everything has to be as historically accurate as possible.

As reenactors, we are portraying something that was originally done with deadly serious intent, yet we strive to be as safe as possible.  Sometimes accidents do happen, but they are few and far between.

Matthew Pizzolato's short stories have been published online and in print.  He writes Western fiction that can be found in his story collections, THE WANTED MAN and TWO OF A KIND as well and the novella, OUTLAW.

Matthew is the Editor-in-Chief of The Western Online, a magazine dedicated to everything Western. He can be contacted via his website or on Twitter @mattpizzolato.
Posted by Matthew Pizzolato at 1:00 AM